From parallel cinema to a smutfest in 30 years, what happened to this one-time auteur? 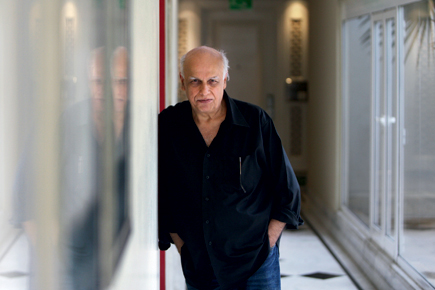 From parallel cinema to a smutfest in 30 years, what happened to this one-time auteur?


The Bollywood dreams of many men and women are dashed not at Mahesh Bhatt’s refusal, it seems, but at his receptionist’s. Seated at a daunting desk, with a peon who reads her newspaper items from time to time, she guards access to Vishesh Films’ inner sanctum with ferocity. She allows only individuals with confirmed appointments, or those deemed worthy of the honour, or phone calls that are expected, to get through. For the rest, she has a stern ‘No’. On the phone, she sometimes has more than a monosyllable to offer. “Yesss, he is on TV and newspapers all the time, but he is not in at the moment,” she says, irritably, her ‘Yes’ drawn out almost as long as the rest of her sentence. “When he comes, I will deliver your message. No, you may not meet him then.”

A gentleman from Pune is persistent in his request for an audience with Mahesh Bhatt. He wants to act in a film, and apart from being a relentless caller, had appeared at the doors of the office only a week ago. He is told that the director isn’t around and shooed away. Almost half an hour later, the man returns with a new suggestion: “Maybe I can meet Mukesh Bhatt then?”

The receptionist, busy on the phone, is relatively receptive this time. She squeezes the phone receiver with her left hand, and leans forward to break it to him: “Mukesh saab and Mahesh saab do not see actors. Maybe lead actors, but not other types of actors.”

“But you don’t understand,” he says, straightening his shirt, “I’m here for a lead role only.”

She responds in three gestures—a quick look to the left, another to the right, and then a long gaze, sizing him up. On the right is a large poster of Emraan Hashmi and Bipasha Basu in the recent Raaz 3. On her left is a poster of the forthcoming Aashiqui 2, with the face of its lead actor and actress hooded under a large jacket, as in Aashiqui the first.

The man leaves, promising to return.

When I am finally ushered in, two hours after the appointed time, Mukesh Bhatt looks up from a pile of papers and says the interview would have to be rescheduled. It’s been less than a week since Raaz 3’s release, and Mukesh says it is essential that he devote all his time tracking the film’s reception. “It is a matter of money, you see,” he explains. Despite having confirmed the interview, his brother Mahesh Bhatt isn’t around either. He is at a press conference in another part of the city, denouncing the arrest of cartoonist Aseem Trivedi. Quoting a poem by Faiz Ahmad Faiz, he tells reporters there, “It is a matter of the principle of free speech and expression.”

A few days later, I track Mahesh Bhatt down to a hotel in Mangalore, Karnataka. He is there, at a Kannada newspaper’s 10th anniversary, to deliver a talk on the representation of minorities and marginalised groups in the media. A couple of days earlier, he was in Guwahati for a book launch, where he spoke of how poorly the mainstream media and rest of India understood the Northeast’s myriad problems. And just before that, he was all over the news, demanding Trivedi’s release. Exactly the kind of volubility that makes him every reporter’s favourite Bollywood contact, a dial-a-quote marathoner, ever-ready with an opinion on sundry subjects ranging from censorship and communalism to relationships and—on occasion—even cinema.

Bhatt, however, sees it differently. According to the 63-year-old filmmaker, this is a charge levied against him for not conforming to India’s “red light of culture” that requires every individual to perform a prescribed role. “I refuse to fit in,” he declares, “Obviously, I am still a currency in circulation. The media and people think I have something to offer, and that’s why I am asked to talk on these subjects. But tell me, who else in our industry speaks about these?”

The top stars of Hindi cinema, he alleges, never speak about communalism and the unfair treatment meted out to Muslims for fear of being labelled Pakistani sympathisers. “They are afraid of losing out on their fan base,” he says, “But these issues need to be spoken about, and I am willing to do so.”

Even so, what strikes one hardest about Bhatt is not the conviction of his voice, but the contrast between the kind of films he once made and what he now puts his money on. In his early years, his repertoire of films included Arth and Saaransh, considered among the most mature and original films of the 1980s. Arth, for instance, sensitively explored a vignette of emotions that accompany an extramarital affair and its fallout, without, at least for the most part, apportioning blame on any particular character. If Bhatt were to produce a film on such a theme today, it would likely be something of a smutfest.

Mukesh, three years younger than Mahesh, explains this transformation by pointing to a wall behind him in his office and a table in front. The wall is covered with award citations for their films, while the table is strewn with paper. “Awards and recognition are our past. What is in front of me now, and what we now make films for, is this,” he says, referring to profit reports, “When we made these so-called good films, we travelled in auto-rickshaws. Now we fly first class.” Mahesh draws the analogy of how only those who sell hooch can enjoy the best whisky.

Vishesh Films, the Bhatts’ banner, has perfected the business of what they term “high concept-low budget” films. The idea is to churn out money-spinners on very little money, with viewers drawn not by overpaid stars and their overdone antics, but by suspense, thrills, erotica and catchy tunes working overtime. A recent example would be Jism 2, written by Mahesh Bhatt but produced and directed by his daughter Pooja Bhatt. Starring porn-star Sunny Leone, the film cost Rs 5.5 crore but has earned more than twice that sum, according to them. The banner’s latest, Raaz 3, they claim, took Rs 20 crore to make and has raked in Rs 58 crore already (by its second Friday). With figures like this, if they want to go anywhere else with their filmmaking, where would they?

To the Bhatts, it makes sound sense. According to them, Vishesh Films’ turning point came in 2000, when Mahesh chose to fold up his director’s chair to become full-time producer. “I was worried then,” says the younger Bhatt, “because Mahesh was a successful director and our most famous face. But he wanted to focus on production and become our ‘ideologue’.”

Though the Bhatts deny it, they are not altogether unbothered by the sniffy air with which their films are dismissed by serious cine-goers. References to “high-brow films”, “real cinema” and the “tyranny of taste” scatter their conversation. This suggests an awareness of what such viewers are looking for. But they’re clear that they have adapted their craft to market reality. “If anyone comes to me saying he wants art, I tell him, ‘Go buy a Picasso’,” says Mukesh, “Bollywood is a dream-factory, a world to escape into. While others seem to have forgotten that, we haven’t.”

Their pet grouse is the lack of recognition of their commercial success. Mahesh harps on how all the attention and awards go to films that break the Rs 100 crore barrier. “But what about us? What use is a film that invests Rs 80 crore and makes just Rs 100 crore? We make over Rs 40 crore with an investment of just around Rs 5 crore.”

In Raaz 3, the Bhatts believe they have a major money multiplier. That the film is full of logical incongruities doesn’t seem to matter. For instance, in one scene, one of the lead actresses finds her hands tied to a beheaded man. Naturally, she screams in horror. So Emraan Hashmi does what he does best. He kisses her, and she kisses him back. And the scene breaks into a song, with the headless man receding rapidly from memory. Asked how such a film can work, Mahesh Bhatt says, “You cannot intellectualise a Ferris Wheel ride, can you?”