Memories of a youthful encounter 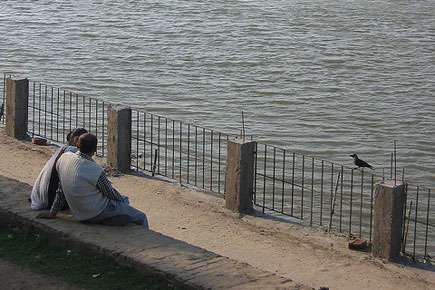 Memories of a youthful encounter


Many years ago, I wrote a letter to a boy who had followed my rickshaw home and flung in my direction a packet containing two bars of chocolate, a card and a long letter. I felt I should write back. So I did: ‘Marriage is a collection of rings. First comes the engagement ring, then the wedding ring, and at last comes “the suffering”’. Also that I didn’t want to get married, and that ‘I wanted to arrive like a comet on the firmament of fashion design’.

For many months, we exchanged letters. We spoke on the phone, and it was hard because the landline had three extensions. I would insert cotton into the other extension ports to make it seem the line had gone dead. In any case, both he and I left Patna. I never managed my threatened dramatic entry into the world of fashion design and instead became a writer. He went on to do engineering, and then got a management degree, and went all over the world trying to figure how to be at peace with himself and the world.

We kept bumping into each other. Once it happened at Delhi railway station, and some months later he called the Patna landline and we spoke. He still tells me I was nicer in the winter, and my chances of falling in love with him were higher then. In the summer, though he will never say it, I know he wants to say I was a bitch. We weren’t an item, but of that city and of those times, his is the most profound love I ever encountered.

He has kept my letters. A couple of years ago, when I was in Bombay, we met and read them together and laughed. And talked about the loss of innocence—that whole deal of trying to sound cool, and different, using words like ‘gimme’, ‘lemme’, ‘wanna’, ‘gal’, and gifting each other friendship certificates and chocolates and cassette tapes with dedications.

He had a bicycle he called Manisha because he loved the actress Manisha Koirala, and wore a strand of his dead dog’s hair in a locket around his neck. He is a collector. He has preserved the wrappers of chocolate he ate while he stood waiting for my rickshaw to pass. The notebooks where I solved mathematical equations are also with him. He had insisted on these. I think we met a few times at this restaurant called McRonald’s. It was right across from Maurya Lok, and had Ronald, the clown, sitting on a bench right outside the two-floor eatery. Inside, Sharmaji, a friendly waiter, was always there to manage situations where parents might come looking for their daughters.

We hadn’t known about McDonald’s then; we were happy in the knockoff. This was also the preferred rendezvous for blind dates. Girls from colleges escaped between classes, looking like a version of the Talibani vision, dupatta wrapped tightly around the face, so nobody could recognise them. We would order chicken soup and linger over it for hours before we went home. I screwed my attendance and he didn’t clear the IIT entrance in his first attempt.

In November 2011, we opened the old letters. Nostalgia, he said, was good for the soul. I wrote horribly; he wasn’t so bad. He told me how he would spend hours at the recording shop looking for songs he could dedicate to me. These would have to be charged with emotion, but any bold or potentially offensive words like ‘jawani’ and ‘chandni raatein’ would come with a disclaimer in the form of a letter. I had just one safe-bet song: ‘Jab hum jawan honge’ from Betaab. Now that we are older, he tells me I should finally dedicate a bolder song. Or a better one.

We decided long ago that we should remain as we were—‘an aspiring couple’. Because it wouldn’t do to overwrite memory. In this case, it is a sweet remembrance of those long letters, and the occasional meeting at McRonald’s. It shut down a few years ago. The city and its roads aren’t the same either.

I used to live in a house—which my father chose to call ‘White House’—for a few months in the winter to prepare for exams. He would often come there and roam the street. I would stand in the balcony, and if nobody was looking, I would smile.

White House is now gone. My father sold it to fund our education. In another part of the city, he too lived on the banks of the Ganga. He would say the river connected us. We’d both gaze at it.

For much of the world, the paraphernalia of such utopian love is an archaic thing. But the truth is love needs to be grand. And love in Patna in those days was something grand.

I know it was the city then. Cities exist in memories. You don’t find them in real time.

I have a few of those gifts from the past, locked away in an old cupboard. There are all these little teddies and Archies cards and friendship bands. There is a diary, too. And letters to me, one written every day, given to me at the end of the year. When I first got a mobile phone, a cheap blue Motorola, I started to write the texts in a diary. I had wanted to preserve the love for future. Only when I am in the city I left behind, I am surrounded with the love I had, and lost to other things like a big city dream, and the itch to see more of the world. I don’t own a grand museum of love like Orhan Pamuk, but like him, I have a few wrappers of chocolate in that cupboard. Somehow I had known there would many kinds of love, but never the same love twice.