Life Is Not a Song 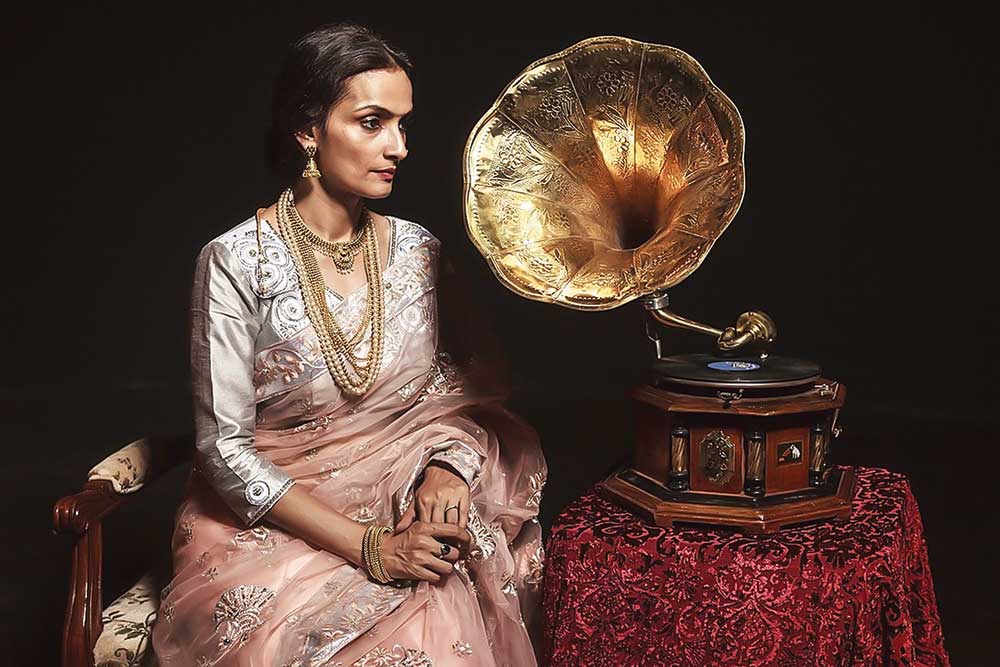 IN THE DARKENED hall, the electric blue shimmers into focus first, the famed ‘MS blue’. Then an arm rises in synchrony with the notes of a Bhairavi prelude. Swaying to its cadence, Priya Srinivasan rises, and using a patchwork of monologues, questions for the audience, Bharatanatyam mudras and a video projection, starts to tell a story.

“I was born in 1916… under Bharani nakshatram. They say those born of Bharani rule the world but music was my empress from the very beginning.” Thus begins the retelling of the turbulent early life and times of MS Subbulakshmi, born to a devadasi single mother. Becoming MS Subbulakshmi tells us of her happy early childhood spent on a Madurai street behind the Meenakshi Temple, the death of her mother’s chief patron and her father, their poverty, the disintegration of her childhood world with the arrival of the Devadasi Act, a controversial marriage, and finally, the redemption that music brought.

Becoming MS Subbulakshmi is Srinivasan’s tribute to an early feminist and genius who straddled different worlds in her lifetime, experiencing life on society’s margins till she was held up and deified as a musical icon. In recent years, MS’s life has come under scrutiny at the hands of scholars and other musicians, especially how her marriage influenced the course of her music. Was she a rebel or a conformist? A feminist or a willing victim of patriarchal manipulation? An unworldly, pious soul or a pragmatist?

Srinivasan’s dramatised take on these questions delves deep into the difficult choices the singer had to make to carve herself a legitimate, unshakeable career in music. “When MS Subbulakshmi was born, her mother’s artistic practice and way of life were already under threat and continued to crumble, reducing her and other devadasis that she met, including Veena Dhanammal, to poverty. When faced with the choice of penury, possible obscurity, and illegitimate relationships—her mother wanting her to become the second or third wife/ concubine of zamindars and small titled maharajahs—she chose to run away to Madras and enter the film industry against her mother’s will. This was not the action of a timid non-cerebral woman,” says Srinivasan, author of Sweating Saris, Indian Dance as Transnational Labor. Srinivasan is also a researcher with an interest in the ‘invisibilisation’ of devadasis and naachwalis that took place once India’s classical arts were appropriated by the elite at the turn of 20th century.

This is MS’s birth centenary year and as the creative community searches for answers to questions about her life, a slew of dramatised versions of her story—with music and dance as vital ingredients—are being performed. But it isn’t only her. Of late, Indian theatre has been celebrating the dramatic lives of pioneering women singers who ruled the concert halls and recording studios of the early decades of the last century.

Biodramas on MS, Bangalore Nagarathnamma, Gauhar Jaan and Begum Akhtar make for riveting stuff on stage: the tumultuous childhood dominated by a driven single mother and absentee patron-father, the years spent in rigorous— often tortuous—training under ustads, the ensuing rise to fame, the radical love life and search for ‘respectability’, and the endless struggle against the tyranny of caste and class.

“The problem is whittling their story down to two hours. What do you pick, what do you leave out? There is so much you could create two-three plays out of the many aspects and periods of their lives,” says Mahesh Dattani, whose play Gauhar , was directed by Lilette Dubey.

Gauhar Jaan, a striking figure of courage and talent at the turn of ths 19th century, is among the first Indian performers to record their voice and revolutionise the field of music and commerce. In his essay on the flamboyant baiji written in 2002 for the web magazine Musical Traditions, record archivist Suresh Chandvankar chronicled her life: she was born Angelina to an Anglo- Indian couple in 1873 in Azamgarh. Her parents split soon after her birth and the mother-daughter duo moved to Varanasi, the home of performing arts.

Here the mother-daughter duo converted to Islam and the mother trained for eight years to acquire a tawaif’s skills from the best artistic minds of the time. Gauhar followed her, according to Chandvankar, mastering Hindustani pure and light classical music, dhrupad dhamar, Kathak, and even Bengali keertan. She was soon to become the toast of Calcutta’s soirees and salons and acquired a bevy of admirers, patrons and lovers. Gauhar Jaan went on to record over 600 songs between 1902 and 1920, becoming a hugely successful artiste.

Dattani says he was inspired by the story of a unique woman artiste who lived life on her own terms 100 years ago. Gauhar Jaan’s singular contribution to the world of recorded music became the subject of intense academic and creative research only 70 years after her death.

“I was drawn to her story. She was a rebel, not just because she achieved what she did despite her lineage but also because she changed how we receive and market music,” says Dattani whose play drew from Vikram Sampath’s 2010 book My Name is Gauhar Jaan (named because of the strident announcement she made at the end of her recordings).

Over the last decades, there has been a lot of research on women artistes kept strictly on the fringes of society in colonial India

Dattani used a distinct narrative style for the play, creating an older Gauhar Jaan (Zila Khan) looking back at her life, and a younger avatar (Rajeshwari Sachdev) living those memories. The first act talks of the singer’s abandonment by her father, and her slow rise to fame in the salons of Calcutta as a singer. Fred Gaisberg, the pioneering German recording engineer at Gramophone Company of India then walks into the play and reflects on Gauhar Jaan’s rise on the music scene. In Dattani’s final act, the old singer and her younger self meet and look back on her triumphs and failures.

“There was a lot of irony in the lives of these women. They were hugely successful and respected as artistes but not as individuals. They had no access to the inner chambers of the homes of the elite where they performed. They were called to weddings to entertain but not allowed anywhere near the ritual space. They lived on the edge of society but that also gave them the freedom to express themselves in ways that were never open to those who chose to [lead lives of] domestication. Their lives and arts existed side by side,” says Dattani.

Over the last decades, there has been a great deal of research on the lives of devdasis, tawaifs and other women artistes kept strictly on the fringes of society in colonial India. Priya Srinivasan says that Indian scholars in the West—herself, Avanthi Meduri, Davesh Soneji and Pallabi Chakravorty among them—have dug deep into rare resources to offer insights into lives which had been left undocumented for decades. “The critical interrogation of subalternity in relation to power and the dancing body has come from the diaspora. My book is only one among others helping to contribute to this re-visibilisation, and rethinking of the women who have been on the margins,” she says.

Hindustani vocalist Vidya Shah, in her seminal project Women on Record that began in 2009, presented popular song- and-story sessions on Gauhar Jaan and other early 20th-century tawaifs and vocal wizards like Janki Bai alias Chhappan Chhuri. Two years ago, she also presented, along with dastango Danish Hussain, the musical Akhtari: a Tribute to Begum Akhtar. Splicing short character sketches and anecdotes about her life with her ghazals and thumris, the production brought to life a woman whose life was a veritable rollercoaster ride of emotional upheavals, musical highs and equally terrible lows.

Veteran theatre artiste and ghazal singer Rita Ganguly has put together a formidable one-woman musical act on Akhtar, her guru. Ae Mohabbat, her play, packs in 36 characters in over three hours. “There are so many misconceptions about her, and as her shagird I felt obligated to demolish those—that she was from a tawaif clan—she wasn’t; that she was arm-twisted into giving up music by her husband— she wasn’t, she was very keen to start a family. I wanted her sketched as she was, including the many grey areas of her life and character. The sheer honesty of her life demanded candid interpretation on stage,” says Ganguly, who based the play on her own biography of Akhtar. Ganguly modified the play as she travelled with it, giving the audience what it wanted in different cities. “In Dhaka, they were keen to know how she became the respectable begum of a nawab and a devout hajji, and so I elaborated on that. Bombay lapped up every detail about her life,” she says.

Busting popular myths about MS, especially the air of divinity built around her, is also the reason Chennai theatre activist and writer Gowri Ramnarayan has been presenting musicals on the many aspects of her grand-aunt’s life. Her latest production, Born to Sing, which premiered in Chennai recently, and is set to come to Delhi late October, tells the story of MS’s youth and the impact of the social, cultural and political movements of the 30s and 40s on her art. “I want to make the audience go beyond the voice and the bhakti, and see how she thinks of music. She put a great deal of labour into it, acquiring great diction in every language she sang in so she could bring out its poetic charm,” says Ramnarayan, who heads the JustUs theatre repertory in Chennai.

Ramnarayan recreates a little-known aspect of the singer’s life—MS had watched sadir dancers in her early life and picked up dancing skills. She and Balasaraswati were known to keep each other creative company. A series of 22 photos of her in the magazine Kalki in 1922 showed MS elaborating on abhinaya. The play dramatised these moments in her life with music and dance.

Ramnarayan’s play, Braving the Ban, used music and readings from archival documents to recreate a tough period in MS’s life when she was banned from the Music Academy in Madras of the 40s— for daring to sing in Tamil when the reigning language of Carnatic music was Telugu. “Till then, Tamil songs were only sung towards the end. She would sing them during the first half of a high classical section. She insisted that she would sing in the language people understood. She composed and collected a whole bunch of compositions in Tamil and sang them with the weight and integrity of classical music. This was probably her biggest act of musical rebellion and few talk about it,” says Ramnarayan.