Leela Samson: Return to the Rhythm

After a series of high-decibel rows ended her last brush with officialdom, Leela Samson is back where she belongs 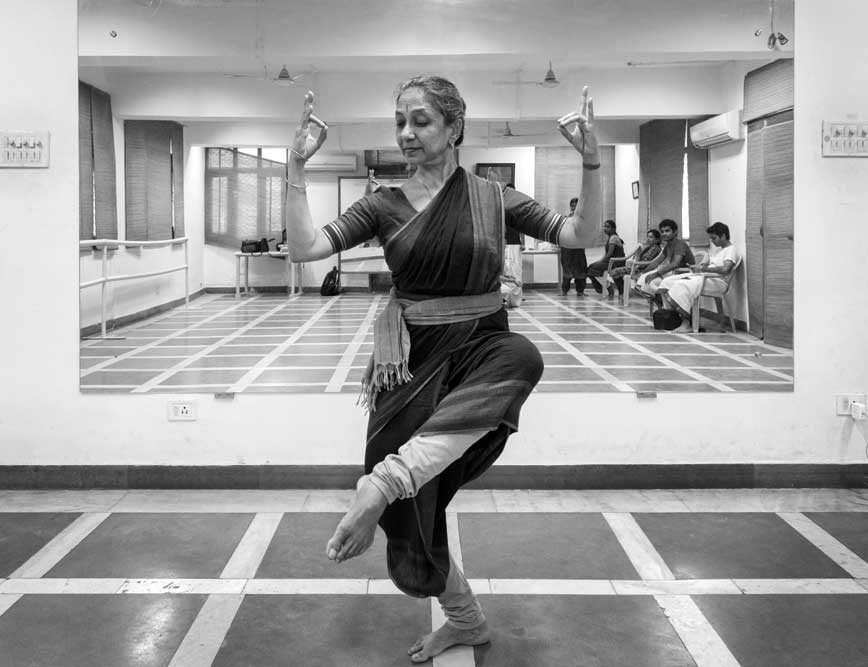 FOR THE SEVEN long years that she worked at pulling Kalakshetra out of its self-induced torpor, Bharatnatyam dancer Leela Samson stayed off the stage. It was a painful decision for a dancer in her prime and, as she points out wryly, few institutional heads bother to avoid conflict of interest. She is now 65, and back, with a hectic schedule of solo works and workshops planned across the globe. But it is Spanda, her 21-year- old dance company that is getting the most of her attentions.

“Spanda suffered the most for my absence. Pulling a group back together takes time. Except Aditi (Jaitly), the team is entirely new and from different banis (styles) which makes for an interesting mix. But to get the dynamics of a collaboration going—the different personalities, styles, attitudes—is tough,” she says.

In a practice hall at Nizamuddin East in Delhi, she has been at work with her eight dancers rehearsing the following day’s big show with some old and a few new choreographies, some traditional, some abstract. From imagining space in ‘Akasha’ to essaying Shiva’s internal dilemmas to working the architecture of a Lalgudi thillana you can see that Spanda is working to resolve the perennial stand-off between classical and contemporary.

Samson’s endless battles with authorities may make her seem like a trenchant confrontationist to those who don’t know her. But she is nothing if not a proponent of a creative middle ground, in life and in dance. “Spanda isn’t modern at the artificial level—no leotards, no strange music. But our work looks inwards and it is non- fussy unlike traditional classical dance,” she says.

Over the last five years or so there have been heated debates on where Bharatanatyam is headed with the modernists seeking complete independence and classicists digging their heels further in. But what worries Samson the most is the revivalism swamping the cultural scene, the renewed emphasis on dance dramas and mythology in Chennai’s dance circles. “When the government changes, everyone wants to please (it). All this chanting and mantras, it is all very nice but there is little progress being made in dance itself,” she says.

It is no secret that Samson is not a favourite of the current dispensation or its ideology. She had left the Central Board of Film Certification after two end-to-end political storms raised by the Sangh—the Board’s refusal to clear MSG: The Messenger directed by swinger baba Gurmeet Ram Rahim Singh and earlier, its refusal to hold back PK. Few were surprised that she quit her position as the head of Sangeet Natak Akademi three months before. Her entire stint at Kalakshetra had been marked by much gnashing of teeth over her Jewish ancestry and unconventional approaches to teaching and administration.

All three positions came to her during the UPA regime and looking back she feels that she had a problem of plenty because she was not seen as a part of any camp and was known to put her head down and work. Samson is so soft spoken you often need to lean in to hear her, but she is by no means a pushover and it is a lesson that the establishment took some time learning.

But was it wise, in peak form, taking on three big profile positions, for a while even juggling all three? “Well… maybe not Sangeet Natak Akademi. Perhaps, for an artiste it is not good to get so involved. But the others—I was not naive in my aspirations for Kalakshetra, I wanted it to grow. CBFC was a fluke but I thoroughly enjoyed the dynamics and the challenges of the place. We had the best, most talented board in place till they brought other people in,” she says.

Through all this, it is clear that the biggest hurt was the manner in which her stint at Kalakshetra ended. Samson was all of nine when she joined the school, but has talked often of the immense warmth and generosity of the legendary gurus of the time, especially its founder and her mentor Rukmini Devi Arundale, the much-loved athai of the campus. And even though over the years her dance has evolved beyond the Kalakshetra straitjacket, its ideals and ethos are an essential part of her.

Setting the institution back on its feet was a dream project for her—she was turning it over, opening its doors to other influences, bringing the outside world in. Students talk of her easy camaraderie that puts homesick young student at ease. But it was clear even then that there would be as many admirers of her swift reforms as detractors—Chennai’s conservative cabal, the institution’s old guard, the conspiracy theorists. It wasn’t long before she left, amidst a swirl of charges.

“Those were tough years. No one there wanted change. I count myself as a part of the institution and we were suffering from our deeds and attitudes of past decades. But we didn’t have to continue with it. I worked hard at inclusiveness, brought in seniors like Lakshmi Vishwanathan and Sudharani Raghupathy to examine and advise us. Can you imagine some the greats like Kalanidhi Narayanan hadn’t even stepped into Kalakshetra till then? I put aside my own preferences to bring in other banis and gurus so students could re-examine the kernels of their learning,” she says.

I have had to chase myself as much as I chased the others. There are dancers who are more talented than me but they didn’t bother to stay fit

The Kalakshetra debacle instigated a debate on arts management. Should artistes manage cultural institutions? Or should bureaucrats? Should it be someone with a handle on culture, but trained to manage? It is a debate that still rages on, with regards to the NDA government and some of its choices.

If Chennai had been tough on Samson during her second innings in the city, she didn’t have it easy when she landed in Delhi either back in the mid-70s either. The city was a cultural scrubland then, with sparse avenues for classical arts that were in the firm grip of the powerful icons of the time. Samson had been bundled off to the capital, and out of the Kalakshetra cocoon, by Rukmini Devi Arundale to teach at the Shriram Bharatiya Kala Kendra.

“There was hardly an audience for dance then, people mostly flocked only to watch the amazing Yamini Krishnamurthy. For youngsters like us, Madhavi (Mudgal), Bharati (Shivaji), Swapnasundari, Sadanam Balakrishnan, it was a huge struggle. You get one programme at Triveni and then after a year or so a performance at Ashoka. There were few dance musicians and those around had to be loyal to the stars. Slowly recognition came that there were multiple styles, young boys from Karol Bagh were emerging as the next generation of Carnatic musicians. Madhavi started programming classical arts for Doordarshan, colour TV arrived…it was a time of discovery and we learnt hard lessons,” she recalls.

Samson evolved into a distinct dancer—she was quiet and introspective but energetic and buoyant at the same time. Even her Sita in Ivar Yaaro gazing admiringly at Rama’s form was an inward-looking piece of abhinaya.

“I veer towards the abstract—more concepts, less storytelling. Even with Spanda, it is important to give space for improvisation and interpretation, watch the complexities of movement emerge as several bodies work on it,” she says.

Even her fiercest critics, and there are a few, accede one fact—Samson forges a fantastic connection with the young. She is a friend, a mentor, a confidante and is open to fresh ideas. She left entire classrooms of students heartbroken when she moved out of Delhi to drop anchor in Chennai.

Those in Delhi’s dance circuits had in those early decades been struck by her teaching methodology. Today, every dancer worth her araimandi and chakkar hits the treadmill and the yoga mat daily to stay fit outside of the rigour of dance practice. But back in the 70s, her students with their leg warmers and daily pre-class exercise routines made for an unusual sight in and around Mandi House.

“I would take them to Rajpath lawns for a run at 5am and return by 6am for the classes. Everyone talks of ‘Leela’s slim dancers’ but I have had to chase myself as much as I chased the others. There are a host of dancers who are more talented than me but they didn’t bother to stay fit,” she says.

An old school of thinking still believes that the emphasis on fitness is misplaced in Indian dance because it rises above the physical. And this infuriates Samson. “If you can’t rein in the body how can you rise above it? I’ve seen Kelucharan Mohapatra show us youngsters in his late 70s how to use the back, after he had a bypass. Watch the Kathakali masters, see how Vyjayanthimala or CV Chandrasekhar pull off entire varnams this late in their lives. We need both, the body and the spirit in the dance,” she says.

When she returned to Chennai the reception had been cool, she had become the outsider with new-fangled ideas. It took her a few years to break into the snobby sabha circuit and even then, only few were welcoming.

Even today, she maintains, neither she nor Spanda is on every sabha’s list. But the group has a fan following especially among the young dancers of Chennai and it is a staple at Karthik Fine Arts every December 31.

Spanda was set up in 1995 with the idea of trimming the Bharatanatyam of that time, through a different approach to nritta, spare costuming and fresh themes. Today its dancers are cult figures among Chennai’s young artistes—admired for their eclectic and off beat work. “We don’t conform to the dance drama format which is a staple at the sabhas and the mythologies which always gather audiences. I don’t have a problem with those but there should be alternate platforms,” says Samson.

Bharatanatyam is currently undergoing a phase of churn and change. But Samson’s team of dancers remain sanguine about their place in this world. “Spanda itself has been constantly evolving and changing, broadening its themes. Also it is a dance company where there is no focus on just one artiste, while others play accessories,” says Aditi Jaitly, among Samson’s earliest students in Delhi.

Fans, critics and detractors pack the Delhi hall for Spanda’s performance. This, Samson, tells the audience, used to be her hunting ground as a young dancer. But returning to the capital is not on her agenda. “There is great scholarship in Chennai and a shared community among dancers. And will Delhi be welcoming? I am not so sure,” she says with a laugh.