Jamini Roy: Eye of the Storm 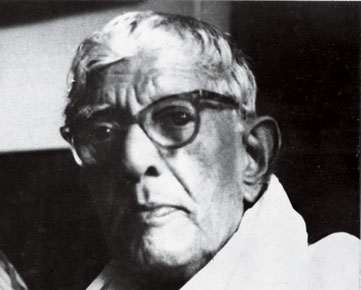 Established in 1936, Dhoomimal Gallery is arguably India’s first art gallery. During its heyday the gallery served as an adda for artists such as J Swaminathan, FN Souza, Krishen Khanna and Manu Parekh amongst others. It is not surprising then that a majority of the gallery’s collection is of modernist masters. ‘Carved Contours’ is an exhibition of about 80 works of Jamini Roy, culled from the extensive Uma and Ravi Jain Estate and curated by eminent art critic Uma Nair. It is part of a series of exhibitions of modernist masters planned by the gallery, to commemorate its 80 years in the coming year.

The works on view include Roy’s archetypal paintings from his Santhal series, Ramayana series, Byzantine- influenced Christian imagery, Alponas, Nayikas, Mother and Child paintings, as well as a series of pencil and ink drawings, which haven’t been seen in public before. These sketches offer a rare glimpse into the workings of the mind of a reclusive artist, whose expansive body of work paved the way for a new modernism in India. The exhibition offers almost an overview of the development of Roy’s aesthetic from paintings in the Orientalist wash technique, to his preoccupation with the Santhal erotic form evolving into his mastery of the folk idiom and techniques that mark his iconic oeuvre.

Jamini Roy (1887–1972) is considered a pioneer of the modernist movement. His rejection of Western and Eastern forms to develop his own lingua franca of artistic expression set him apart from other artists of the period. Trained at the Government College of Art in Calcutta, from the 1920s onwards, Roy’s work went through a series of phases, and the rejection of dominant art movements like the Bengal school, till he arrived at his iconic style exemplified by the use of indigenous materials, subjects and bold lines, brisk brush strokes, flat colours in simple compositions. Roy has been described as the father of folk renaissance in India, whose work ‘transitioned from that of a half-hearted orientalist to a robust primitivist’ as noted by art historian Partha Mitter.

In Annunciation, a gouache work on board, one sees an unusual colour palette that is a deviation from Roy’s basic colours of brick red, ochre yellow, vermillion, charcoal grey and cobalt blue. In this painting, he takes a quintessential Christian theme of the annunciation of Mary and depicts it in his typically simple, monumental style with thick outlines, flat colours and almond shaped eyes that protrude from the face. In his quest for a distinctive modernist aesthetic, Roy was influenced by several movements in art, which he also practiced and appropriated to suit his indigenous mediums and themes. His desire was to find a language that was local, pastoral, Bengali, but could be used to depict several themes including those drawn from Christianity. The Annunciation is a perfect example of this, where a Christian theme is depicted using Indian forms by maintaining the sanctity of the subject, while subverting the diktats of Western aesthetics.

There are two Mother and Child paintings on display in the exhibition. In one, perhaps made in the early part of his career, Roy depicts a bare-chested tribal woman feeding her baby, with contemplation writ on her face, set against a rural landscape that is dwarfed in comparison. The mother has been framed in the centre of the painting, monumentalising her against the vast sky leaving negative spaces on both sides of the figure. In the other Mother and Child work, one sees the unmistakable style of Jamini Roy where the figure fills up the frame and the drapery of cloth is rendered using his signature colours, brisk, clean brush strokes with little negative space. Mother and child is a beloved theme in Roy’s work and one he repeats in many modes. But despite the stylistic variations in these two compositions, both works exude the same pathos, and sensual intimacy of maternal love.

From his early body of works, there is an unusual tempera-on-paper work, a Mexican Cowgirl, that is part of the salon style display. Here, it is interesting to note that in some of his early works such as this, and the Crucifixion (also on display), the eyes of the figures have not been drawn in. This is a peculiar occurrence given the significance of eyes in Indian art, especially in Bengali folk art where the eyes are the last to be drawn as they are believed to give life, whereby the act of darshana or seeing is activated. The absence of eyes in these works allude perhaps to Roy’s own lack of clarity and his continuing search for a language and aesthetic that he could truly call his own, without which his work was incomplete.

The collection of sketches on view tells the story of an artist who was constantly practicing and honing his skills, ideas and techniques. We do not know whether these drawings were meant as sketches for paintings he made later or if he saw them as works in themselves. They do however lay testament to his ‘slow, deliberate and systematic processes’. And although there is some resonance of the compositions and figures in his painted works like the Seated Lady, it is not always the case. Certain compositions are actually quite unlike Roy’s painted works. For instance, there are sketches in which multiple figures are stacked on each other in a 4X6 format. The economy of figures and the placement that one usually sees in his other works is absent here. The sketches, which beckon more in-depth research and study, give a rare glimpse of the thinking and working processes of one of the great Indian modernists.

Throughout the exhibition there are also several works that pay homage to Roy’s preoccupation with pastiche, Byzantine scenes from the life of Christ, painted on woven palm leaves that depict a European theme, rendered in Indian colours and materials.

Roy was a believer in egalitarianism and the accessibility of art, so apart from his focus on theme, medium and technique, production and distribution also formed an important dimension of his practice. His politics lay in the belief that art had to be from and for the community. Unlike his contemporaries like Chittaprosad Bhattacharya, Roy was uncomfortable with the label ‘communist’, preferring to address his social and political concerns in his own inimitable way through his art.

For the same reasons, Roy made multiple copies of works in his ‘factory’ like workshop, evident from the number of untitled Seated Lady works on view as sketches and gouaches. According to Mitter, subverting what Walter Benjamin called the ‘aura’ of the artwork, Roy consciously did not sign or date many of his works, in some cases signing works that he didn’t make himself. This political act is plain to see throughout the exhibition where his signature is painted prominently in red in some works, while completely missing in several others.

It is rare to see a range of eclectic styles from impressionism, post-impressionism, minimalism and folk at a single exhibition, but that is the kind of artist Roy was. The exhibition captures the development of Roy’s exceptional style over decades with works that have never been shown before. Perceptively curated by Nair, the exhibition leaves one wanting only more information on how to navigate and understand the critical relationship between works, and how they played into the larger trajectory of Roy’s artistic pursuit.

Roy’s oeuvre marked a seismic shift in India’s understanding of its own visual culture, but in creating this visual identity, Roy, much like his teacher Abanindranath Tagore, portrayed women in predominantly traditional, maternal and even decorative modes, which strengthened the perception of women as mere repositories of culture with little or no agency beyond. Nonetheless, the exhibition gives us an insight into the journey of a remarkable artist who developed an iconic visual identity for the newly formed nation state. It is heartening to see that ‘national treasures’ that have been invisible for long can now be seen by the public for the very first time.

(‘Carved Contours’ is on view at Dhoomimal Gallery, Delhi, till 10 March. Preema John is an arts administrator based in Delhi)