From governor generals to lowly soldiers, India hosts many Britons who are only too glad to hang around after they have been long dead 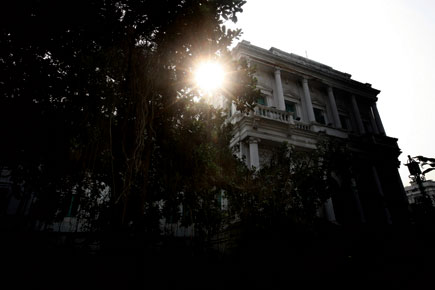 From governor generals to lowly soldiers, India hosts many Britons who are only too glad to hang around after they have been long dead


Although this was 15 years ago, Tapas Chakraborty has a clear memory of the frightened guards he would encounter after hours of study at the National Library in Kolkata on eerie, rainy nights. The sound of a raindrop falling off a leaf would be enough to arrest your stride. “Those who used to be on duty during the day would exchange tales of horror, but the night guards would refuse to tell you anything of the sort. They used to be strongly built youngsters from Rajput families of eastern Uttar Pradesh, but their faces would be petrified,” he recalls. Many of them would carry a copy of the Hanuman Chalisa as protection, and touch the tips of tridents when nervous.

They needn’t have. The campus ghost was unlikely to have been turned away by tales of Hanuman’s valour, nor would he have made much of Shiva’s three-pronged weapon. He was a British ghost—India’s most famous such, say some. Moreover, the guards needn’t have feared him, since he was not particularly keen on tormenting natives. The ghost of Warren Hastings, the first Governor General of India appointed by the British East India Company, had far more important matters to attend to at Belvedere House, his famous residence that was later turned into the National Library campus.

Hastings is still not done. His pale apparition is occasionally seen in a carriage trotting in to search—in vain—for a black bureau that was misplaced just before his return to England. The bureau contained papers that could have proved his innocence at a time when the House of Commons was gunning for him relentlessly. In his lifetime, Hastings never found those papers. Although all charges against him were dropped eventually, the frustration, the helplessness, sense of injury stuck with him forever. Or so the legend goes.

Sixty-three years after India wrested itself free of the Raj, things have come full circle. The British, original examiners of the supernatural, have now become the subject. During the Raj, many officials studied and documented native superstitions and folklore. Some even wrote great ghostly works inspired by the country, like Rudyard Kipling. ‘Coming from a land where haunted house and castles were the norm, (they) were fascinated by the wonderful variety of supernatural manifestations they found in India,’ writes Ruskin Bond, in his introduction to Ghost Stories from the Raj, a collection of spooky stories written by foot soldiers of the Raj between 1840 and 1940. Churails (witches with feet facing backwards), munjias (bachelor Brahmin ghosts), bhoots (plain old ghosts) and praits (poltergeists), all feature widely in the collection. And so do stories of disgruntled ayahs (nannies) strangling the blue-eyed baby and wronged Indians haunting their sahib in the afterlife.

Just as bhoots need a sturdy Peepal tree to sit on, the British ones thrive in their palatial mansions and dilapidated graveyards. But in a swiftly urbanising landscape, the haunted places must compete for space with tourist resorts, skyscrapers and illegal squatters. Soon, these enigmatic creatures might be homeless. And the British Council won’t even notice.

Ruskin Bond calls the ‘British race’ a phlegmatic one, and perhaps the same can be said about them in the afterlife. Unlike the melodramatic, devious Indian ghosts, they tend to stay understated and harmless. And pale, always pale. Regrets, misfortunes, secrets, even the simple nostalgia for tea and cake could hold them back to haunt the land they once ruled.

Take the case of Owen Tomkinson, a British soldier who died of cholera in 1908 in Gaya, Bihar. Speak to residents of Ekbalnagar, where he is buried in an old graveyard, and they say that the poor old Englishman stops passersby at night and dawn to ask for tea and cake. Amarnath Tewary, a journalist who covered the phenomenon for the BBC, found that locals leave behind tea, biscuits and homemade cakes on Tomkinson’s grave to placate this ‘angrez bhoot’. “The story brought international media attention to Gaya,” recalls Tewary. The locals loved the attention, and even developed a fondness for the 103-year-old English ghost and his graveyard tea party. “He is quite unlike other ghosts. He is harmless. Even if you do not serve tea and biscuits, he leaves you if you promise to get it [later],” local resident Faiyaz Ahmed told Tewary.

The Indian supernatural imagination, it seems, is far more inclusive than our rational self would like us to believe. For every over-exalted Warren Hastings, there is a modestly benevolent Pooly Sahib, worshipped in a village near Tirunelveli, or the Lady of Dagshai near Shimla, whose grave blesses women with sons.

In a village near Tirunelveli, there is a shrine called Poolypettai, dedicated to the ghost of Pooly Sahib—an Englishman who may have been called Powell, Poole or Pudding, for all we know. He was a soldier who died in 1809, injured during the wars between British forces and the kingdom of Travancore. Among the many stories surrounding his death is one about him as a heroically injured Englishman, struggling alone to make his way back to a European settlement for medical help. When the local Shanar community found him, they also found brandy and cheroots in his bag.

To the local mind, it seemed impossible that a man who lost such a grim struggle in such hostile territory would not torment the region as a restless soul. So they built him a fancy shrine reserved for the highest order of Shanar devils, replete with obelisks for the spirit to relax on (otherwise given to walking in air). To date, people leave him alcohol, cheroots and other items that would be appreciated by the English devil. Displaying great cultural sensitivity, they even sacrifice the occasional ox for the contentment of the beef-loving sahib.

Madame Blavatsky, founder of the Theosophical Society, describes the sacrifice at Poolypettai in her 1880 book From the Caves and Jungles of Hindostan—it involves singing, dancing, a scary priest covered with bangles, and a fiddle believed to be strung with human veins. At some point in the ritual, Captain Pole’s spirit enters the priest’s body, leaps in the air, and kills the ox. He drinks the hot blood and begins to dance.

While Pooly Sahib gets to dance his loneliness away, elsewhere, an unfortunate young lady loses her grave to the Indian obsession with sons. In 1909, Mary Rebecca Weston, a British officer’s wife, died while in pregnancy. Her grave, a marble structure of a lady and her baby being blessed by an elf in its lap, was brought all the way from England and placed in the cemetery of Dagshai, Himachal Pradesh. It was looked after meticulously during the Raj, when Indians were barred from the cemetery. Now we know why. A hundred years later, the grave stands in ruins—chipped away and wrecked beyond recognition. Part of the damage is courtesy a superstition among the wives of Indian soldiers posted nearby that a piece of marble from the grave would bless them with a baby boy.

When it comes to ghost stories, the stories are often more important than the ghost itself. Which is why people who have never spotted Warwick Sahib’s ghost in Jeolikot in Nainital, will still tell you about it. This Englishman was the quintessential sahib; he enjoyed drinks with his kind at the bar, participated in the British Government’s retreat from Nainital, and lived on pension thereafter, according to Bhuvan Kumari, a neighbour of Warwick Sahib’s erstwhile estate. “It was only when he went to his grave that they discovered he was actually a woman posing as a man,” she says. This secret has turned Warwick Sahib into a figure with supernatural powers, gender-bending being only one of them. Locals at one point even believed that his estate housed a weeping statue of Mary. For Bhuvan Kumari, the place remains spooky, with grottoes and other shocking secrets waiting to tumble out.

For how long will British ghosts haunt India? There’s no saying, really. Bishop Robert Caldwell, a missionary who worked in South India, used the Pooly devil’s worship as an example to show how the locals viewed their oppressors. He even defended the worship in his writing: it wasn’t horror or hatred of the dead man, but pity for the sadly grotesque death he met, away from his loved ones in the middle of a desert, that led locals to help the restless soul.

Most British ghosts are lost, lonely and harmless creatures—21st century misfits. Representative, in some way, of the mix of nostalgia, distaste and fear that forms most Raj memories. Ruskin Bond, a diligent documenter of ghosts, is also guilty of inventing a few. He takes responsibility for spreading the story about the ghost in Mussoorie’s Savoy Hotel. It was once such an empty, creaky place that it was almost a literary crime not to have a ghost live there. Bond shares a recent interaction he had with a little reader: “She was a 10-year-old and complained that my ghost stories weren’t scary enough. ‘Can you make them frightful?’ she asked me.”

In a world of vampires thirsting for schoolmates and ghosts who jump out of television sets to tug victims in, the old British ghost may be losing its grip. These anaemic apparitions, driven by their old world melancholy and compulsions, aren’t all that scary anymore. But our hill stations and bedtime stories would be incomplete without them.