‘If They Say Kiss, I Ask How Long’

Rajiv Hari Om Bhatia on being Akshay Kumar, and why some people hate him 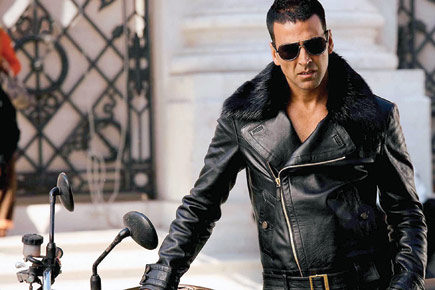 Rajiv Hari Om Bhatia on being Akshay Kumar, and why some people hate him


Rajiv Hari Om Bhatia once lived in a small house with 18 relatives in Delhi’s Chandni Chowk. He was just one of the many handsome young men then leading an unremarkable life. Until he suddenly became Akshay Kumar in what was then called Bombay. In an industry where stardom is usually a favour of the genes, Akshay Kumar somehow managed to find spectacular success. There have been murmurs that he is the highest paid star in the country. It is tempting to publish his astronomical fees, but then most Bollywood figures are unworthy of print. What is true, though, is that he is right there at the very top. Here, in a candid conversation with Open, he describes the world according to him, and why he does not think highly of critics who have panned his latest film Kambakkht Ishq. Excerpts:

Q Critics say that Kambakkht Ishq is a vulgar and cheap film. It’s making money at the box office, though. How do you see this situation?

A Let me put this as politely as possible: people who can be paid to say bad things will [say whatever they are paid to say], but at the end of the day, the audience proves us all right or wrong. Film lovers number in millions versus a handful of negative critics. In my life, never have I let someone else make my decisions for me. If a random person tells me something is bad, I’m not going to listen to him or agree with him. I’m my own person, we all have different tastes. I like tea without sugar, but my sister likes it with sugar, no problem. If we all didn’t have our own tastes, all the men in the world would be married to the same woman, wouldn’t they? Reviews have never changed my decision to want to see any movie, Indian or international. I have my own opinion and that’s enough for me and it should be for you too.

Q Was Kambakkht Ishq supposed to be your ticket to Hollywood? Sylvester Stallone, Brandon Routh and Denise Richards are in the film.

A It is nowhere near a ticket to Hollywood but by the sound of it, they [Hollywood stars] wouldn’t mind a ticket to Bollywood. We are all in love with our own industries. I’ve no agenda when I star in a film. I can’t exactly plead with my producers to spend huge amounts of money to sign great international stars just so that I can satisfy my whim to go to Hollywood. Hell, no. We just want to show that we are as big and as capable as anyone in the world in the business of cinema, and have fun in the process.

Q You’ve kissed Denise and Kareena Kapoor a lot in the film. Did the script demand it or were you inspired on your own? Denise even went on to say that she was left in no doubt that you were Bollywood’s hottest man and a great kisser.

A I had to kiss these wonderful ladies not only because my character demanded it, but also because a red-blooded, hotheaded stuntman can’t exactly be frigid now, can he? But more importantly, I’m an actor and I do what my director asks me to do. If he says ‘jump’, I ask ‘how high’, if he says ‘kiss’, I just ask him ‘for how long’. Simple. We are human beings and we have been kissing since birth. It’s strange that people are so amazed at its existence in our country. In the film, they weren’t rude kisses or anything like that. They were kisses in character and were in sync with the story line.

Q Before every film of yours is released, a slew of malicious and scandalous rumours make the rounds like the one involving your trainer Jennifer or one of your co-stars like Katrina Kaif, or about your box office collections being poor. How does that happen?

A A lot of people out there don’t like me getting a fair chance in life or my fair share in the big Bollywood pie. They get scared and possessive of their territory and react in the only human way they know—create a war to make themselves feel better. All I can say is I’m sorry you guys have to read and hear this kind of negative and false stuff. Just think of it as light entertainment. I’m glad everyone has noticed the pattern finally, the fact that there are only bad things said when I have a movie releasing. This has been happening to me for a while now. But I still stand tall and say never mind and go on with my business. Who said show business was easy anyway?

Q Which Hollywood actor or personality would you like to be associated with in a future film?

A Meryl Streep. She is an actress who sweeps clean the floor with any actor she works with. On second thoughts, maybe I’d be too scared to share a scene with her since she is so very talented and fabulous. Also, I would love to work with Quentin Tarantino as his movies are so outrageous, so radically different.

Q How has the slowdown of the economy in India affected you?

A My asking fees in the recession is half of what it was when our country’s economy was booming. We are all only what our country can give. If we run low on rice, I will have rice only once a day, if we run low on money, I can only charge what the country can afford. I have no work if there is no money in the banks. I’m not a money grabbing thief as I am painted out to be. I do have morals you know.

Q You are becoming quite a style icon, aren’t you? Your films too are creating a lot of fashion trends.

A Well, thank you very much, but I don’t think you have ever seen what I look like off screen. I deliberately make an effort to look like I don’t own a wardrobe so I can walk around looking like a tramp in the hope that no one recognises me. But on screen I try and make a huge effort to look presentable for my fans and audiences. Otherwise, my wife Tina would kill me.

Q Khatron Ke Khiladi has lured you into hosting the second season too. When does it hit the television screens?

A Ah ha. It is coming out sometime in September-October. Even I can’t wait to see what all these girls went through, again. I am still feeling sorry for them—it was that khatarnak (dangerous). If you thought the first season was crazy and had you on edge, this one has to be seen to be believed.