Anju Dodiya on ‘Imagined Immortals’, her show in Delhi that uses contrast to stunning effect 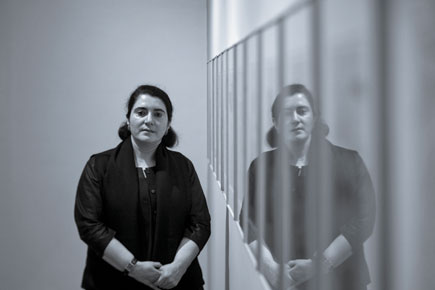 ‘Knife.’ That single word, written large over a painting, might be jarring. But at the beating heart of Anju Dodiya’s new show ‘Imagined Immortals’ (17 January to 14 February at Vadehra Art Gallery) are an exquisite clutch of collages which electrify the viewer with their marriage of sharp objects and blood with flowers and plates, human and animal heads. Seen together, they form a powerful narrative, beautiful reworkings of medical diagrams surprised with the sedition of faces—and the resultant whole transcends these many parts.

“The sharp objects have always been a part of my work. I juxtapose: for instance if I use water colour, which is transparent, I use charcoal, which is hard and dark and clouded. This has been happening in my work all the time. It is an ongoing process,” says Dodiya. ‘Imagined Immortals’, which holds several series of more traditional paintings, is an extension of her contrasts, adding up to that big story of the conflict within.

Dodiya has established herself as a major contemporary artist over the last two decades. The 37 works currently on display (24 of them mixed media) range in price from Rs 1.80 to Rs 24 lakh, according to the gallery’s director, Roshini Vadehra: “Each work has a tender, yet strong quality. Serious themes have been dealt with [using] powerful images, yet have a humorous tone to them. The technique itself is masterful.”

Quietly pretty, Dodiya is deliberate and thoughtful in responding to questions about her work, calmly correcting misapprehensions. Working out of a studio in Ghatkopar, Mumbai, where she is based, she has been preparing for this show, a big one after an interval.

“I showed ‘Necklace of Echoes’ here in 2009. In between I have been working and one changes and evolves. After so many years you see a change, but I think it is organic. At art school I was doing only collages, that was my work. A few years ago, I got interested in medical illustration, and in 2013 I did a group exhibition which Geeta Kapur curated, on the subject of death.”

Indeed the rigorous figures and haunting faces of her earlier portraits find a perfect home in these clever composites. Sometimes, a head is seen emerging from a deer, or neatly placed over the heads of birds, as seen in Twins. The art is in the mixing. The Serpent and the Spy (mixed media on printed paper, like other works) features a snake, a man with a splash of veins apparent on his face and a furry black hat, then flowers, another face and organs, little and deceptively pretty. Like Peach Blossoms, whose flowers make you shiver and smile, it shocks and delights. “I was looking a lot at these medical illustrations, and I used that imagery in my watercolours,” says Dodiya. “It happened that I came across a book of medical illustrations and decided to play with it. It responded to that approach.”

Just entering her fifties, Dodiya is at a decisive moment in her evolution as an artist, and part of this is knowing exactly where her creative energies lie. The moment when she had viewers have their way with her work at her 2012 show in Mumbai, ‘Room for Erasures’, was an unusual point in this journey. What was it like to come out of that?

“It was about renewal, and it was ritualistic. It was a dramatic, intimate gesture; to give myself to the viewer. I gave everything I have to my art and then asked the viewer to erase it. It was a kind of coming closer. It was really genuine, I felt stuck and needed an opening. I tried in my way, since it didn’t happen I said, let somebody help me. Some of those erasures were very active. I was expecting it and then I accepted it. I started interpreting it. Some people thought it was a waste, and that the drawings were fine by themselves. They did not approve of this performative art.”

The gesture was ultimately rewarding. “One started thinking about the kind of freedom a viewer can take if you allow them to,” says Dodiya. “I started thinking about how vulnerable we all are really, as people and as art objects. You throw yourself open and you never know, how far the other side will go. I am the same person, but it gave me great courage, in terms of imagery and process. I trust myself.”

Would she do it again? “I don’t know, it was a very specific moment.”

Dodiya arrived on the scene after pioneering women artists like Nalini Malani and Arpita Singh, and does not feel she faced particular challenges as a woman. On occasions such as a seminar with fellow artist Reena Saini Kallat and art critic Nancy Adajania, she has addressed the label (‘Why I Am Not a Woman Artist’, Jehangir Nicholson Art Foundation, Mumbai). Her work, very much on its own trajectory, resists trends. Dodiya has been showing her work in group exhibitions since 1986 and had her first solo show in Mumbai at Gallery Chemould in 1991, going international with a solo at Bose Pacia (2006), New York City. Exhibiting widely in India, she has shown her work at spaces including Bhodi Art in Singapore and New York City; the Chicago Cultural Centre, Chicago; the House of World Cultures, Berlin; and the Museum of Contemporary Art, Helsinki. Dodiya first learnt her craft at the Sir JJ (Jamsetjee Jeejeebhoy) School of Art in Mumbai, where she met her husband Atul, renowned artist and her opposite in terms of craft and temperament— she is seen as the classic introvert (she once described their equation saying “I am the brake and he’s the accelerator”; India Today, 2013).

Yet, within the dramatic battles represented on Dodiya’s canvas are moments of real, menacing introspection, which belie the quiet. In one, a series of eyes are spattered with black ink, a single blue-green jewel hanging from one (Viridian Nights): beautiful.

A series of four mattress paintings, making beautiful use of ink, are another strength of the show.

“These four just happened and became a sequence. I was thinking about it, all of us know this character from the Mahabharata (gestures at a painting depicting Gandhari, wife of Dhritarashtra). It’s supposed to be a gesture of compassion but I was thinking it was rather vain. I found it interesting, that someone should want to do that for her husband, take on blindness. I thought there was a possibility of looking at characters from literature or history, and to play with the absurdity of certain actions or moments. I was interested in remembering these moments in popular culture.”

How does her medium become a part of the final effect, here? “The fabric is an extension of things I have been doing earlier. I found that it responded very well to ink. These drawings on fabric, when they are stretched like a mattress, become a strong physical object by default, which I like.”

There are several more traditional paintings, and one of the most arresting perhaps features a Japanese style figure, its pen thrust at its combatants. “I have been interested in Japanese oil prints, and I have painted artists in the studio. I connect with the samurai figure of the Japanese print because I feel that art is actually a martial art, because of the rigour that we expose ourselves to. It’s an absolute life and death situation, every decision that one makes. There are heroic aspirations of wanting to do something; this shows the whole push or pull within.” Dodiya shows me two other artist figures, displaying the triptych as we walk around upstairs on the first floor.

Panic Room for Luis Buñuel is the most personal work here, she says, choosing the Spanish filmmaker as the locus of the artistic battle. “The panic room is not for Buñuel, it’s for me. I felt that this whole anxiety of being an artist, the whole battle: the domestic pull, the tug of the mundane, responsibilities of every day.”

Buñuel, in the painting, is staring at the viewer with his trademark intensity and large, baggy eyes, while a figure lays claim to him. “That detail, the figure, is from Goya, another Spanish master. She is being tugged by some sort of a dark mass, she is tugging onto Buñuel, who for me became a symbol of some sort of psychological freedom; everything is allowed, and you can juggle with heads all you want in the studio.” There are, in the upper left corner of the work, a variety of heads for just this, of course.

The leader of the surrealist movement of the 20s holds great significance for Dodiya. “He became something to grab onto, to hold onto, to aspire to. I like that stare, it’s very compelling, that gaze. He was a young man here, and he grew up and got older. This is from a photo that [American visual artist] Man Ray took of him. This one is a sort of confessional work.”

Within this arctic gallery, confessions are, fittingly, cold comfort.