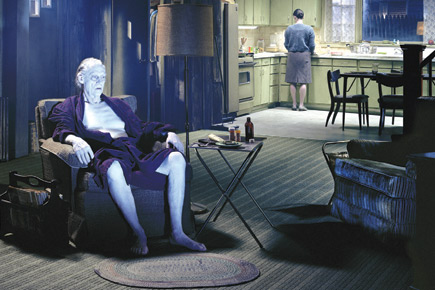 
Q Why is your show called Beneath the Roses?

A This show is my effort through the last seven years. As the work progressed, a theme developed. That of beauty and sadness in everyday life. That’s why I think I called it that.

Q What are you trying to say through the show?

A I’m very interested in the psychological mystery behind everyday life. I guess I wanted to show what’s lurking underneath our everyday life and behaviour, which we take for granted. I wanted to probe that.

A I don’t know about others. Speaking about myself, I think these are beautiful photos too. I think I’m inclined to capture psychological unease. But I don’t think that makes me unhappy as an artiste.

Q Is your function as an artiste to capture the world as it is, or is it to intervene in what you see with your vision?

A I can’t make that distinction. My focus is just to make powerful, memorable and beautiful images. To catch the unexpected theatricality of daily life.

Q You seem clearly inspired by cinema. Which artistes have influenced you?

Q These photos seems like they were taken in New England? Is that part of America always bleak?

A Yes, it is New England. A small town called Pittsfield in Massachusetts. It’s not really sad all the time.

Q Is it fashionable in the US to deal with suburban alienation?

A Not quite sure. But there is space for idiosyncrasy. My photos are quixotic.

Q You were part of a one-song wonder punk band, The Speedies. How and why the switch from music to photography?

A The Speedies happened when I was 17. I was a guitarist and after college, the band just went its different ways. Although people still remember Let Me Take Your Photo. HP bought its rights later. So, we haven’t vanished from the public imagination.

Beneath the Roses runs till 31 October at Sakshi Gallery, Mumbai. Check out our gallery for more images.