From Russia with Bolly Love 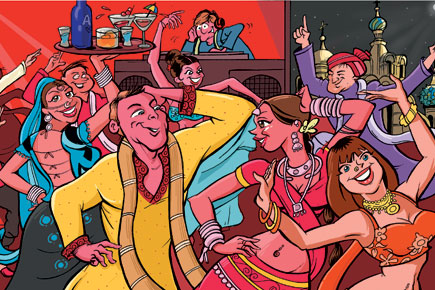 
As the elite in India slip into the grip of Spanish fever, the well-to-do of Russia turn more and more bullish on Incredible India. The craving for Levi’s, Marlboro and all things American and capitalist that defined the early post-Communist era has given way to a new obsession with all things Eastern, especially Indian, in soft focus.

Among Moscow’s upper classes, the India Experience has become a rite of passage of sorts. Almost everyone has spent a winter in Goa, and the more intrepid sort have spent months wandering its remote towns and gallis in search of ‘real’ India. Meanwhile, yoga schools, meditation centres, Goa-inspired cafés and restaurants, and Indian spice and fabric stores are opening up across Russia’s capital in a frenzy of Indianisation. Indian gurus, always on the lookout for rich patrons, have quickly tacked Moscow and St Petersburg onto their global itineraries.

I’ve been aware for a while of this Russian fascination with India, and was keen to experience it first-hand when invited to play Hindi film music as a disc jockey (DJ) at a Bollywood bash in St Petersburg for the closing of a film festival this past September. I flew in on an overcast morning to be met at the airport by a driver holding a big placard reading ‘100 Bollywood’, which set the tone for the trip. Driving to the hotel on Nevsky Prospekt, I was struck anew by the breathtaking beauty of this northern city, especially as we approached Kazan Cathedral, with its horseshoe-shaped colonnades that seem to embrace the city. Just visible down the street from the Cathedral was the fiercely beautiful Church of the Saviour On Spilt Blood, with its ribbed and multi-coloured onion domes. The city’s main artery Nevsky Prospekt was crowded that morning, and natives and tourists alike were wearing thick scarves, hats and jackets to keep warm. The setting reminded me of a novel by Dostoevsky, not hot and pulsing India, which seemed a world away.

India seemed an abstract concept at the venue, which was an old merchant’s house on the Neva, facing the spires of the Peter & Paul fortress, where many Czars are buried. The walls of the palatial house were bare, except for a few Bollywood-style posters, and the chilly, damp weather was the inverse of the tropics’. Zhu, the hyperactive organiser of the event and an old friend from my Moscow days, ran through the evening’s plan in her usual rapid-fire manner. The dots still didn’t connect.

Things began to pick up by mid-afternoon, though, as folks from a bicycle shop in the yard began putting together a DIY rickshaw from wooden planks and fabrics from Goa. Archana, a kathakali dancer from Bangalore married to a Russian, arrived a bit later, setting things in motion. She was to play Anna Karenina in a Bollywoodesque recreation of the Tolstoy classic for the party, and turned up with jewellery, dresses, mehendi, decorations and tonnes of other goodies that were pounced upon by stylists and make-up artists. Anna Karenina’s arrogant younger lover, Vronsky, was being played by a charismatic 28-year-old Indian actor-entrepreneur from Mumbai, who had been living in St Petersburg since he was 16. The ‘director’ was an Indian tabla player from Moscow, who used to work at the Indian Embassy there.

Russia has always had a kernel of an Indian community, and this bash had clearly created quite a stir among Indian expats in St Petersburg. A couple of dozen or so excited Indian students showed up closer evening to perform as extras at the party, for free food and drinks.

With Zhu’s six-syllables-a-second voice haranguing the team, things began shaping up at the speed of a revolution. In Russia, like in India, things do get done, but at the last minute, and with a lot of shouting and cajoling thrown in. Zhu’s been behind some massive events in Moscow, and she—along with her partner, Meshkin, who also worked furiously, while cradling their cat on his lap most of the time—knows what she’s doing. Even though Moscow is her city, and this was her first event in slower St Petersburg, her force of personality and will prevailed. As promised, a stage for the band materialised in the courtyard; the corridors were also sheathed in rich Indian fabrics and pictures of Ganesh and other gods. The most startling transformation was wrought by the Indian costumes, which were loaned from the state film company, Lenfilm.

With women in gorgeous saris and salwar kameezs, men in sherwanis and turbans, we instantly had a wedding atmosphere. As a troupe of young girls began practising Bollywood moves, and a video jockey projected stills from Indian movies on the walls, we had a zabardast vibe at last. All that remained was for guests to arrive and vodka to pour.

The event itself was epic, fuelled by copious amounts of vodka, of course, and remixes of Om Shanti Om hits. Resplendent in a gold sherwani, saffron turban and necklace with big jade stones, and spinning out track after track at the DJ console, I felt a bit like a Bollywood star myself. Girls gave me appreciative looks as they walked by, and lo, they certainly looked great. White women in Indian garb have always been a big turn-on, and here you had a whole 19th century house full of them. The saris revealed gorgeous bellies, even as jewels, henna and colourful fabrics lit up their pale features. Girls I had barely noticed in the afternoon now sparkled like Diwali sparklers, full of life and vivacity.

When Jonas, the other DJ, took over the turntables, I wandered downstairs, where guests took turns posing on the specially done-up rickshaw, and others waited in line for spicy chicken curry. Everywhere, the talk was about India. As one of the few ‘Indians’ at this Bollywood bash, almost every Russian I bumped into felt compelled to share an India experience with me.

One of the stage hands, now unrecognisable in kurta-pyjamas and a blue turban, told me about falling sick in a small Indian village in the Himalayas and being cared for by a family there. “It’s not like here,” he gushed, “It doesn’t matter who you are or where you’re from. People just see you as another human being.” The lead singer of a Coldplay-like band that was to play later introduced himself as ‘Rambhag’, and confided that he had a guru in West Bengal whom he visited three or four times a year: “I don’t drink or smoke anymore. India taught me to find peace within myself. If it weren’t for those times of shanti with my guru, I couldn’t survive here.”

I was struck by how earnest these Russians were about India, thoughts that were seconded by the tabla-playing ‘director’ from Moscow. While Indians back home are proud of their local Formula 1, visits by celebrities like Paris Hilton or footballer Messi, success in cricket, designer nightclubs, and any number of other symbols of success in the global arena, Russians still see it as a land of humanity and spirituality. Americans might whisper about India’s conservative attitudes towards sex, and its lack of a decent nightlife, but Russians seem too much in awe of the idea of India to criticise it for such base reasons. Their India is a spiritual, ancient land beyond reproach, one that stands in reassuring contrast to their individualist, vodka-fuelled, materialistic culture eroded by almost a century of Communism.

High on vodka and chicken curry, and tiring of ‘goodie goodie’ Russians, I was relieved to join a conversation among some dudes about the Indian Anna Karenina’s hands. “She has the most gorgeous hands,” said one in wonder. “They’re so delicate and refined, nothing like those of our Russian girls. I’d love to be able to link them with mine for a bit.” I made the mistake of saying something along the lines of “That’s cool but do you guys know she’s married?” and one of the guys turned on me: “This has nothing to do with sex. I have a girlfriend. It’s aesthetics.”

Seeking an escape from such bursts of karmic energy, I made a beeline for the bar; but even there, there was no respite from all the yogic vibes. A pretty blonde barmaid I’d noticed earlier, all gorgeous in a green salwar kameez, confided that she had been reading the Mahabharata. “Do you remember the scene about the meaning of life and the lake with Yudhishtra?” she quizzed me. How did Ganesh become Ganesh? Did Shiva really chop off his head in a lover’s fit of rage? Was Krishna as wise as they said he was?

I was glad to return to the DJ console and get the crowd pumping to some Disco Dancer beats. At least Bollywood wasn’t going to get all spiritual and meditative on me. It was the music of the senses, masala for the ears, a smorgasbord of sounds best played at wedding processions in provincial India. The crowd loved the music and we had a groove going that persisted until the wee hours of the morning, when the party finally ended. Everyone then gathered in a tiny bar, and a session of drinking, Russian-style, began in earnest. At this, the Russians were still Russians, for all their supposed love of Indian spirituality. The barmaid poured me Tequila shots and asked me more questions about Sanskrit and nirvana, questions that I didn’t mind answering anymore. At some point, a group of us stumbled back to the hotel, past the grand buildings of the Winter Palace and the square where the Bolshevik Revolution had begun, and the partying continued till morning.

When I awoke around noon, some were still drinking beer in the common dining area. Since everyone was starving, somebody went out on a food run and returned with some greasy McDonald’s burgers. We all raised a toast with our Baltika beer, and India again seemed very far away.