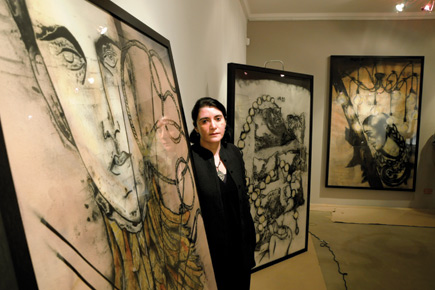 
The necklace is an overpowering and almost macabre motif in Anju Dodiya’s ‘fictional self images’.

Artist Anju Dodiya insists her paintings are not exactly self portraits. “They are fictional self images of a performer who pantomimes suffering,” she says. This is a path she has followed since she held her first solo exhibition in Mumbai in 1991.

Nearly 20 years later has come the exhibition Necklace of Echoes. The paintings follow the same depiction of the self, but this time the character is adorned by, or is in the act of wearing, a necklace. Depicted are functions of the necklace that would defy the conventional bib, the choker, the dog collar or the rope. Instead, we have an orthopaedic brace, torn bits of an email that spurned a lover, a protective arm comforting a bleeding soul, the city of Mumbai dangling around the neck as an enclosure, or a gruesome garland of bleeding fingers from the legend of Angulimala. The necklace, through Dodiya’s density of watercolour and charcoal, becomes macabre.

“It [the necklace] is both armour and noose,” says the 45-year-old artist, who bears an uncanny resemblance to artist Frida Kahlo—in art and in life. Though Dodiya declares she wasn’t aware of the Mexican great till very late into her own career, both have at least a couple of commonalities. Both married artists of fame. Kahlo was married to the famous Mexican muralist Diego Rivera and Dodiya to Indian painter Atul Dodiya. And Kahlo, too, has a work famously titled Self-portrait with Thorn Necklace and Hummingbird (1940).

“There are huge differences in our work,” says Dodiya. “Kahlo’s was extreme and exhibitionistic. Mine is very subtle and withdrawn. And unlike hers, my life is not that tragic.”

Inspired by French artist Sophie Calle’s creative project called Take Care of Yourself, undertaken after Calle gets a break-up email from her lover. Not knowing how to respond, Calle gives the email to 107 women and asks them to respond. This painting is Dodiya’s response. Here, she tears up the letter and wears it as a necklace—symbolic of destroying the relationship as well as keeping the memory.

The artist came across a Tibetan Buddhist version of Angulimala’s tale, an aristocrat’s son who was made to believe that he would achieve divinity if he killed a thousand people and wore a necklace made from their fingers. In Dodiya’s version, Angulimala could be an artist making an inventory of all the little suicides involved in sending art-works into the world, the self mortgaged to fame. Or he could be a contemporary terrorist, lured with the promise of paradise into killing innocent people.

The necklace is both armour and noose. In this work, the poisons of avarice and aggression are released through a ritual bloodletting, with the artist’s doppelganger restraining her with a neck-lock. The arm going around the neck is a protective gesture. The saviour here has deep concern for the soul beset with violence and helplessness.

Necklace of Echoes will show at Vadehra Art Gallery, New Delhi till 20 February.