For the Fun of It

So goes Vikas Bahl’s mantra, whether he is chasing scripts or making movies under his own banner. As he awaits the release of Shaandaar, the filmmaker explains why 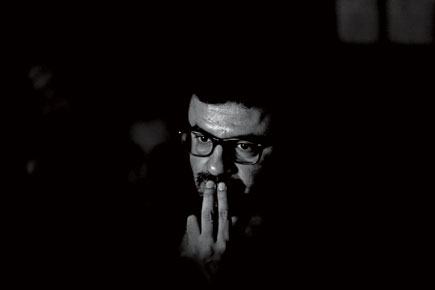 It wasn’t until 2007 that filmmaker and producer Vikas Bahl had his first tryst with the movie business. As executive vice-president of UTV, Bahl was brought on board to lead the studio’s alternative motion picture division, UTV Spotboy. The initial days at work, he says, were spent furiously doodling at his desk to fool passersby of his glass-walled cabin into thinking that he knew what he was doing. The ruse may have worked. Ronnie Screwvala, founder of UTV and the man who’d hired Bahl, has a different version to tell. “I found his storytelling ability at a very high level. He knew how to inspire people and spot good scripts and talent,” he says. “Also, when you’re a development executive creating content that will impact millions of viewers, I think the quality of empathy is an important one and I spotted that in him,” adds Screwvala.

Eight years on, Bahl continues to shape new voices in filmmaking, except now as the owner of his own production company, Phantom Films, which he runs along with his partners Anurag Kashyap, Vikramaditya Motwane and Madhu Mantena. Bahl has directed two National Award- winning films, Chillar Party and Queen, and is about to release his third, Shaandaar. With his latest film due to hit screens in October, Bahl is understandably a very busy man. “I think I’ll have to release the film only till the interval,” he jokes, as he settles into his brick-walled cabin at Phantom Film’s Andheri office for a quick chat. The early rushes of the film, starring Shahid Kapoor and Alia Bhatt, suggest that it has been produced on a scale far grander than the film that made him famous as a director, Queen.

“This is more a fun film. I wanted to do a film with big songs and large shots. I always enjoy watching something like that,” he says, aware that the unprecedented success of Queen meant that what he had to offer next would attract keen interest. He appears to be defusing some of that pressure by going out of his way to undersell his abilities as a filmmaker. “It’s just a fun film, a simple love story. There’s nothing much in it,” he says with a smile that hints otherwise.

The word ‘fun’ features frequently in Bahl’s vocabulary. His co-writer Chaitally Parmar says the word best describes Bahl’s style of work. “We travelled to 11 countries to write Queen,” she says, “Vikas loves to go away, meet new people and enjoy different experiences. A lot of this became a part of the script.” Parmar read the initial draft of that movie when she was working in the story development team of UTV with Bahl. At the time, it was one of the many ideas they were weighing. “I thought the concept was great, but I had a few disagreements with the script,” she recounts, “At first, all my suggestions were thrown out of the window, but slowly Vikas started hearing me out. We spent two years writing and developing just this story.”

Bahl’s debut film, Chillar Party (2011), a simple story about a gang of street kids, was born out of his doodling sessions in the UTV office. Given that he had no experience of film direction, he figured the best way to get by was to hire an excellent support team. “Even in the first two-three days of Queen, I was dying. I thought I should pack my bags and go home. By then I had forgotten where to put the camera and what shots to take. But all my assistant directors knew better filmmaking than me, so I figured it out,” he says.

“Not much has changed,” observes Parmar, who has co-written the story of Shaandaar as well. “But sometimes he really surprises you by saying something technical at a music session, and you think, ‘Wow, where did that come from?’”

At UTV Spotboy, which has shut down since, Bahl sniffed out the potential in some great scripts like Aamir, Welcome to Sajjanpur, Paan Singh Tomar and Dev D that broke new ground in storytelling. “But all that came much later,” he says. “To begin with, I didn’t have the phone number of any director or actor. I knew only one person from my days in advertising who had by then become a big-shot in Bollywood, and that was Prasoon Joshi. Then I remembered after many weeks that I knew Tigmanshu Dhulia. So I called him and he came and met me with this small chit, where he had written about Paan Singh Tomar and I loved it,” he recalls.

One script that Bahl had backed against all odds, even when the rest of the team was non-committal on its merits, was Dev D. “No one liked the script, including my wife. But I somehow loved it,” he says. The film also marked the beginning of his friendship with filmmaker and now business partner Anurag Kashyap. “We first discussed Phantom Films the day UTV refused to make Gangs of Wasseypur. I think that was the trigger point,” says Bahl. In 2011, Bahl gave up his fancy designation and even fancier salary to start Phantom Films. “When four friends are together, it doesn’t matter. All of us gave up something, but then we got back something much more,” he says.

Screwvala says he was sad to see Bahl leave, but it was clear by then that it was in both their interests that he moved on. “The studio model that we were creating was one where we needed creative catalysts—people who develop ideas but not impose their [own] creativity. You’ve got to spot, nurture, inspire talent, and then let them be. By the time he had finished his run at UTV and directed Chillar Party, it was very clear that he would be best suited to do his own work,” says Bahl’s former boss.

As a student, Bahl had left the environs of Lajpat Nagar in Delhi, where he was raised, to pursue a corporate life in Mumbai. Before winding up in the film industry, he juggled a few well-paid jobs in the advertising and media industries, but studiously kept away from the creative end of things. After graduating a gold-medalist from the Narsee Monjee Institute of Management Studies, he worked in Ogilvy & Mather’s client serving department and later moved to Radio Mirchi as the channel’s marketing head. His first taste of a creative job was at Sab TV, where after he joined as head of programming, the channel leapt several positions to fourth place on the ratings chart. While scouting for good projects and directing films is a shared responsibility of all of Phantom’s founders, marketing is an area that only Bahl understands. He’s also probably the only one who enjoys it. Filmmaker Navdeep Singh’s NH10, released earlier this year by Phantom, was handled as a production by Motwane, but when it came to its promotional strategy, it was Bahl who took the major calls right from the get go. “I guess because of his background, he has greater marketing acumen than the rest. He definitely understands it better than Anurag [Kashyap], who just goes by his gut and is not always audience-friendly,” says Singh.

“It’s just so much fun,” says Bahl, “I love to market and produce Vikram and Anurag’s films. When we do films like Hasee Toh Phasee, Masaan and Udta Punjab, the directors push you to think because it is not my skill set to be able to make films like those. Those movies are innovative and the marketing also has to be innovative.” As his own film enters the final stretch of its promotional campaign, Bahl knows he’ll have to face questions about being burdened by the success of his previous film. To that, he has an answer ready. “Now I can make anything. I don’t care. I think I should be allowed to make at least 10 mistakes,” he signs off.