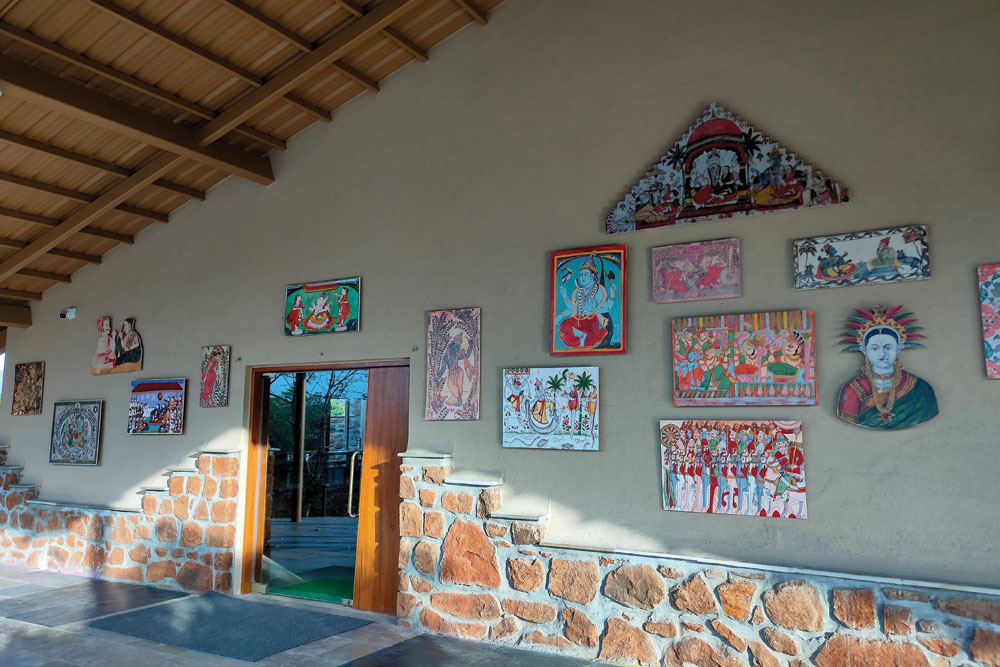 The entrance of Zapurza


The best kind of personal obsessions are those that benefit a community. These are passions that start off as personal pursuits but then grow into a force of good. A new museum of art and culture was recently inaugurated, 25 km from the heart of Pune. Named Zapurza and founded by Ajit Gadgil of PNG Sons, one of the city’s oldest jewellers, this new art facility is spread over eight acres, and boasts of eight galleries, a 195-seater auditorium, an amphitheatre located by the banks of a lake, studio spaces for art, dance, printing, a café and a museum shop. All of the paintings and artefacts at the museum belong to jeweller Gadgil’s personal collection, which he has built over the last 20-25 years. The museum, all done in earthy tones, has been designed by Kolhapur-based architect Shirish Beri (known for landmark buildings in Dharwad, Panchgani, etc.) and construct­ed over four years. Zapurza is located in Kudje and set by the Khadakwasla lake, a favourite for day-trippers. As the galleries of Zapurza overlook the waters of Peacock Bay and Sinhagad Fort, viewers can now glimpse art, offset by nature.

Pune-based artist Raju Sutar, who has helped Gadgil create this museum, recently accompanied me on a walk­through of the space. Most galleries and museums across the world strut high walls, tall gates and steep stairs. Their façade intimidates rather than wel­comes. Zapurza, on the other hand, is wonderfully situated at ground level, its gates are open to all, and till June 30 entry is free. This ensures that Zapurza has the buzz and hustle of a haat rather than the sterile silence of posh galleries. People from the neighbouring villages walk in on a whim and a fancy.

This inclusive and all-embracing approach to the audience—which the Indian art scene so desperately needs— also translates into the exhibits at the galleries. As Zapurza is entirely drawn from Gadgil’s personal collection, it is both brilliant and eccentric. The galler­ies showcase a range of art and artefacts, from originals by the Progressive Artists’ Group like SH Raza, MF Husain, KH Ara to paintings by Atul Dodiya to Amrita Sher-Gil to Prabhakar Barwe to Nasreen Mohamedi to lanterns from ships to silver betel leaf boxes to Paithani sarees to oleographs from the Ravi Varma Press. The variety, often randomness, of the collection can boggle the mind. Does anything old merit being in a museum? Should archaic light switches, tin boxes, fading postcards, matchboxes be preserved in glass cabinets? It is best to see Zapurza not through the lens of museum curatorship, rather it needs to be seen as one man’s passion project.


Speaking in Hindi, Gadgil says, hail­ing from a jeweller family, he was always surrounded by art. His mother had a good hand for embroidery and painting. His father could even play the organ. As a young man, he would catch all the art shows at Bal Gandharva Ranga Mandir in Pune and the Jehangir Art Gallery in Mumbai. As the family was in the jewel­lery business, people would often bring precious heirlooms to them to melt, in exchange for money. Gadgil says he often didn’t have the heart to melt these items as he knew they were no longer being made. Given his personal interest in the arts and the family’s background, he started collecting objects that he found precious. If he has bought an untitled illustrated poem of Rabindranath Tagore from a Christie’s auction in 2014, he has also bought numerous items from Mumbai’s Juna Bazaar. His search for collectibles takes him to auction houses, antique bazaars, ancestral homes, even dilapidated industries. As Gadgil’s homes and offices filled up with objects, his wife would often scold him and tell him to stop bringing new items to the house. He says, “Mujhe laga sirf mein anand le raha hu, baaki logo ko bhi lena chaiye (I felt only I am taking pleasure in these things, other people should enjoy them also).”

Sutar, who joined Gadgil in 2012, says the only advice he has given him is—only buy what you like. As what is on view is only 20-30 per cent of Gadgil’s entire collection, the exhibits will change every few months. Walking through the current exhibitions, one realises Gadgil is a man of ceaseless and varied tastes. Gallery one, curated by Sutar, showcases The Collection. On enter­ing, one is greeted by an oil-on-canvas of a nude woman with her back to the viewer by KH Ara. In the same gallery one can see Jamini Roy’s tempera on fabric Sita’s Agnipariksha of muted terra­cotta hues and almond eyes. An untitled Jamini Roy painting surprises as unlike Sita’s Agnipariksha, which is so typical of Roy’s style, this shows a cross-legged widow with prayer beads. It is these juxtapositions that elevate The Collection. The most recent work at The Collection is a sheet metal sculpture by Dhruv Mistry, that was bought at the India Art Fair in Delhi, early this year.

With eight ongoing exhibitions, it is expected that some are more stellar than others. The standout ones are certainly The Collection, Print & Imprint and Maharashtra School—Art & Thought. These are distinguished by both the high-quality works and the attempt to tell an art story. For Gadgil and Sutar, Zapurza is a venue to showcase the best of Indian art, and to highlight work from the state. The exhibition Maharashtra School—Art & Thought, for example, brings together artists who belong to the state and many who have studied at Sir JJ School of Art, which was founded back in 1857. Sutar says, “I am trying to say, when you say ‘Maharashtra,’ it is not just the land, it is the thought behind—the huge Bhakti movement, industry, great reformers. There were few things that happened that were pioneering. Every­thing reflected directly, indirectly into the art. JJ School of Art happened. There was the Bombay Revivalist Movement, which was talking about the Indian style of painting, just like Bengal School. But there is a difference. Bengal school rejected everything Western, but here we tried to adopt.”

With eight ongoing exhibitions, it is expected that some are more stellar than others. The standout ones are certainly the collection, print & imprint and Maharashtra School—Art & Thought. These are distinguished by both the high-quality works and the attempt to tell an art story

At Maharashtra School—Art & Thought, viewers can see works by artists of The Bombay School, such as SL Haldankar who was known for his water colours and Abalal Rahiman, who was instrumental in establishing the Kolhapur School of European Naturalism. He was also the court paint­er of Shahu Maharaj, in the princely state of Kolhapur. MV Dhurandhar is said to have been a popular teacher at JJ School of Art who painted myths and legends as well as historical incidents. Zapurza has an interesting museum story behind a Dhurandhar painting. A woman, with a saree pallu over her head, holds three spherical fruits and stares out of the frame. The work was initially credited to Baburao Painter, a well-known artist, and one of the earliest filmmakers. However, at the in-house conservation lab, when the varnish was cleaned, the signature of MV Dhurandhar was revealed. It is these discoveries that excite both the art histo­rian and the regular visitor.

WHEN ASKED WHAT his favourite works are from the collection, Gadgil politely refuses to give an answer. However, he does admit being partial to the Rabindranath poem that hung in his bedroom and a striking acrylic on canvas by K Laxma Goud of a rural scene that was initially mounted in his house. Gadgil’s interest in Ravi Varma’s oleographs is also evident at Zapurza. Ravi Varma used oleographs to “mass-produce” paintings of Hindu gods and goddesses in scenes adapted mainly from the epics. At Zapurza, viewers can actually see the century-old stone blocks that were used at the Ravi Varma Press to produce oleographs. Oleographs, as described by encyclopaedia Britannica, “are produced by preparing a separate stone by hand for each colour to be used and printing one colour in register over another.” At the Ravi Varma Press, often 70-75 stones were used for a single print. This technique was employed widely until the end of the 19th century to produce colour prints. Sutar describes Ravi Varma as the “Warhol of India,” and rightly so, given his popularity and ubiquitous presence. But to see the series of stones that were used to create a single painting at the press is to realise the labour and attention that went into creating a Shakuntala or a Lakshmi or a Ganpati, which hung in so many Indian homes.

At Zapurza, an entire gallery is dedi­cated to Paithani sarees, dating to roughly the 18th century. Preserved behind glass, these sarees even today impress with their rich colours and intricate borders. Gadgil says that he started collecting these sarees as people would come to their shop to melt the gold from the zari borders.

Everyone who hears about Zapurza, first asks about the roots of the name. Gadgil says he and his cousin Dilip Joshi (who is also a curator) found the word in a poem by Marathi poet Keshavasuta. A made-up word, it means the artist’s state of mind when he/she is creating. It is an apt word for a space that is a museum but not just a museum, as it is borne from one man’s love for interesting and beautiful objects. It is an art and culture space that aims to include the locals rather than focussing only on the art elite. A recent Sunday saw a footfall of 1,500 people as the free entry encourages people, across the spectrum, to visit. An art facility is a true success if it creates a new generation of viewers and crea­tors and moves beyond India’s gentry. Zapurza is an important step towards bridging the gap between Indian art and India’s people.