Sooraj Subramaniam: The World at His Feet

Sooraj Subramaniam is one of the most sought after freelance dancers in the world today. He tells Malini Nair how he bends and blends genres 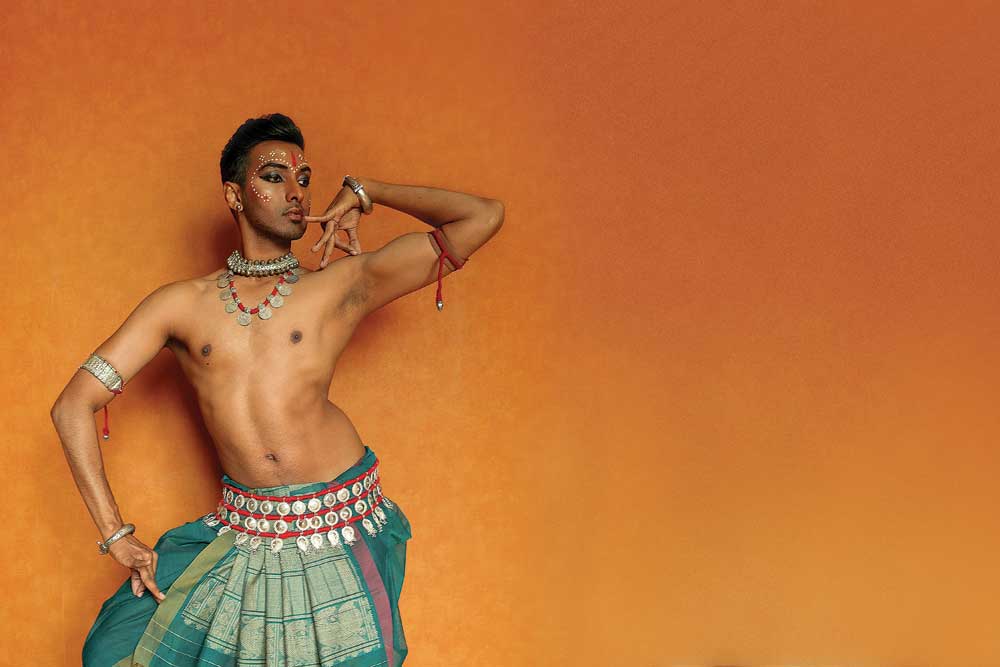 YOU COULD GO into the analytics of his strong chauk (wide-legged squat) or his eloquent hastas (hand gestures), but there is only one way to say this: watching Sooraj Subramaniam dance is pure pleasure. At a performance at Drishtikon, dancer Aditi Mangaldas’ cosy studio in Delhi, he effortlessly genre-bends between Odissi and Bharatanatyam. He is fluid and curvilinear in the former, and all angular vivacity in the latter. He didn’t do it, but he could’ve pulled off Kathak, ballet and contemporary dance as well.

At 38, Subramaniam is an unusually multifaceted dancer, his artistry so polished that he is one of the most sought after freelancers in contemporary dance companies of Europe, especially those that seek to converse with classical forms. Now based in Ghent, Belgium, Subramaniam has worked with the biggest names in London, such as Shobana Jeyasingh Dance, Srishti and the Balbir Singh Dance Company.

A testimony to his talent and creativity is his outstanding piece Nocturne, where he turns a sleepless night into a dance performance. All the mundane acts-—including that midnight pee, flushing and washing of hands—are translated into an intelligent, humorous and compassionate choreography with hand gestures, positions, and stepping in and out of Bharatanatyam, Odissi and Kathak.

“I keep going back to the classical vocabulary and use it to tell my own story and I find it liberating. I don’t worry about where it belongs. I danced in pyjamas in Nocturne and said what I wanted to say,” he says.

The demands made on a dancer’s body and sensibilities are different for classical and contemporary, but Subramaniam seems to manage an easy continuum. Aditi Mangaldas, who has watched him perform at the 80th birthday celebrations of her guru, the indomitable Kumudini Lakhia, says perfection and beauty underlined with intelligence mark all that he does. “I always think of him as a poet. And his body is totally tuned so it produces music in dance,” she says.

In India, the striking dancer with an expressive face and a lean, supple form, is visible only in frustratingly small snatches, so when he performs, the buzz is understandable. ‘There is this dancer you must watch…’ But why aren’t we getting to watch more of Subramaniam? And why isn’t the famed Chennai season yet to wake up to his artistry?

“There are people you need to meet, places you need to be at for that,” he says with his trademark self-deprecatory laugh. “I have ambitions, but I am not ambitious, or pushy. I haven’t set my eyes on a goal yet.”

For an artist who straddles many worlds, his idea of happiness is quite remarkable—being in a dance class. “I love to perform, but I would like to be an eternal student. What to do?”

When I talk of classical Indian dance, at times I feel like a snake oil peddler. So it is a great responsibility to stay true to what I have learnt

In Delhi, he is attending Odissi guru Madhavi Mudgal’s classes for a while, perfecting a gloriously complex Pallavi in raga Chhayanat, which she has choreographed. He has also worked on his dance at Lakhia’s Kadamb school of dance, and polished his abhinaya skills with Bragha Bessell in Chennai.

Bharatanatyam dancer Rama Vaidyanathan says it is this unassuming and open-minded approach to dance that sets him apart. “He dances to feel happy and I just love that. He chooses to keep a low profile, but he does fantastic work, silent work. I have watched him put the talam (beat) for someone’s varnam (Carnatic song) in Chennai, play manjira for someone dancing Odissi, perform a contemporary work in the US, all with equal ease and sensitivity. This comes from his exposure to multiple cultures and thoughts,” she says.

Subramaniam, born in Malaysia, is among a growing number of Indian classical dancers whose artistry has been nurtured almost entirely outside India. His grandparents—he is part Malayalee and part Telugu—had moved to Malaysia in the War era and stayed on.

His maternal grandmother, by all accounts a determined matriarch, made sure that the children learnt Bharatanatyam and Carnatic music. The local temple precinct and teacher’s home in Kuala Lumpur also doubled up as cultural centres for south Indians. Subramaniam recalls getting his early dance lessons from Mrs Aiyappan, a cousin of the Travancore trio, and performing at the local Raja Rajeshwari temple.

But the turning point came in 1989 when the siblings enrolled at Sutra Foundation, guru Ramli Ibrahim’s dance school in Kuala Lumpur. The two would be sent off on weekends for classes with basketfuls of sandwiches and idlis to sustain them through nearly eight hours of practice and 50 km of commuting.

“The ten years that were spent there were a huge part of our lives. Dance became serious and we acquired a huge appetite for not just dance, but all arts because Ramli had a very broad vision for art. He was constantly pushing boundaries and asking us to do so too,” says Subramaniam.

Dance under Ibrahim’s tutelage was eclectic. It meant exposure to Odissi, fitness and warm-up practices and even some ballet. “It was all part of a routine. You did everything,” Subramaniam recalls. A large part of his cultural sensibilities come from his guru. “If he taught us a Dikshitar composition on Devi, he would devote the first half of the class to the feminine principle. For him, everything is art. ‘If your art is serious it will nurture your humanity,’ he would say. He gave us no sense of fear, just confidence to own what we do,” he says.

Once school was over, there was the Indian dilemma of staying on with art or opting for a ‘professional’ course. “My mother was a vet, so I chose a five-year veterinary science course in Australia. It wasn’t like there was a great conflict or anything. And, anyway summer vacations were spent entirely at Sutra,” he recalls.

I keep going back to classical vocabulary and find it liberating. I danced in pyjamas in Nocturne and said what I wanted to say

What pushed Subramaniam to pick dance over a life as a vet was the death of his ammamma (grandmother). “We were very close, she was a big part of our life. And suddenly dance loomed like a wonderful thing to turn to, to deal with the loss,” he says.

Subramaniam’s first brush with India as a dancer was a disappointment and perhaps determined the shape of his career. Kalakshetra, the revered temple of arts in Chennai, refused his application, because he was deemed ‘too old to join the course’.

Australia, on the other hand, offered interesting opportunities. He picked up an advanced diploma in ballet. And with a cousin based in Perth, Premala Sangarananda, he set up a dance company, Mudra, teaching and performing Odissi and Bharatanatyam across western Australia.

In 2007, he moved to London, the city that is fast emerging as a centre for what he calls “cross-cultural dance conversations”. He taught middle school students biology to support himself, but continued dancing. The critical break came when Nina Rajarani’s dance company, Srishti, was looking for a male dancer with Bharatanatyam and non-traditional skills. The company’s work Quick! drew attention to Subramaniam’s work. With its vigorous, award-winning choreography, it had male Bharatanatyam dancers in suits mime the mania of the corporate world.

He also picked up enough skills in Kathak to perform for the Balbir Singh Dance Company. For Jeyasingh, a cerebral dancer and choreographer known for her cutting edge works, he has performed pieces such as Bayadere: The Ninth Life.

“Over the last decade or so, the really versatile dance companies have acquired a resilience for contemporary with classical vocabulary. But there are only about ten of them,” says Subramaniam.

Pure classical solo dance has limited avenues in Europe, with few options other than community recitals and the few curated festivals. Government funding does not extend to pure classical dance, as it is seen to have limited outreach.

Belgium, where Subramaniam now lives, still deals with classical Indian dance as exotica. “When I talk of classical Indian dance, I sometimes feel like a snake oil peddler. So it is an even bigger responsibility to stay true to what I have learnt, not the fairy tale version of it,” he says.

At a time when younger classical dancers in India are struggling to break free of the traditional margam (repertoire), Subramaniam, a strong contemporary dancer as well, is raring to get closer to it. “I have a craving to indulge in the narrative curve of the margam now. I truly believe that it is the best way forward for a soloist, especially my style. It develops your emotional arc as an artist,” he says.

He believes the forms he has learnt, complement each other, adding, “Change happens all the time, but you need to know where your roots are.”

India is becoming a more hospitable place for male classical dancers today. Isn’t it a better place to fulfil his ambitions? “Is it?” he asks. Well, perhaps not. There are still debates over what male dance should be about. Should they pick the pieces that feature men, a hard task since classical dances are nayika-centric? Should they emulate the feminine? Should it not matter?

Subramaniam, who had the audience in raptures at Drishtikon, playing the sarcastic jilted lover pretending to not care in Aduvum Solluval and a reluctant Radha in an Ashtapadi, says he has no problems playing the woman. “I see no conflict there. I am fine with playing the nayika,” he says.

Madhavi Mudgal points to the fact that dance was dominated by male gurus who switched gender roles fluidly, without creating separate repertoires for men and women. “Kelucharan Mohapatra would ask, ‘What is purush ang (the male role)’? He could transform into the 16-year-old Shodashi (goddess) with ease. But yes, it is tougher for male dancers to enter classical dance as a profession,” she says. But Subramaniam, she says, has what many young dancers lack—a distinct vision of what he wants to do.

In the classical world —notorious for its conservatism, whether it is social, sexual or personal mores —Subramaniam is openly gay. “I am straightforward about it, there is no drama around the issue,” he says. “That is a part of me but it has no bearing on my abilities or relations with other artists.”