A new band of superheroes mixes adventure with social compassion 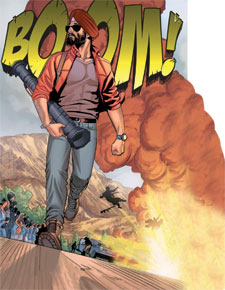 She wears a burkha and she’s a superhero. Covered from head to toe, her abaya spread out wide, she can fly like Batman. But, unlike Bruce Wayne, she is no billionaire philanthropist. The concerns of the Burka Avenger are a lot more prosaic: education and female empowerment. She is the kind of superhero you never thought was a possibility. She throws a book at a locked door of a girls’ school, and the doors open— letting the girls enter a world of their dreams, a step into the future. That’s how she fights the social evils that exist around her, empowering individuals and making wrongdoers realise their crime. Burka Avenger is the alter ego of a sprightly school teacher called Jiya, who also practises takht kabaddi—a martial art form that’s all about the control and use of reflexes, and her weapons of choice are pens and books.

This new breed of desi superheroes fights crimes and injustices that we read about in newspapers, watch on television, and sometimes even see with our own eyes. They fight for gender equality, the education of girls, and raise their voices against the Taliban, and help people deal with real issues that need to be tackled in real time.

Burka Avenger’s Indian sister could be Priya of Priya’s Shakti. Ram Devineni is a documentary filmmaker and the man behind this character who fights gender-based violence. Priya, who was abandoned and ostracised by all and sundry because she was raped, was faced with social idiocy—‘Why did you go there?’ ‘Why were you alone?’ ‘It’s all your fault’—before she decided to empower herself and take a stand against injustice. Devineni interviewed some rape survivors, too, before he went ahead with his venture. “We need to stand with and identify with survivors of rape and gender-based violence—so they feel comfortable seeking justice and begin the process of healing, and challenge deeply rooted patriarchal views,” he says. Given that women are seldom able to escape the inequities of patriarchy, it’s this ‘epidemic’ that Devineni is trying to expose. His success can be gauged by the tremendous response to his debut venture. The illustration style is heavily influenced by the Amar Chitra Katha series, and the protagonist is a believer who gains her inner strength—and motivation to conquer her fears and face her demons—from her faith in Goddess Parvati.

Priya’s power is the strength to be compassionate, to forgive, and to persuade people. What Devineni also wants to convey through his character, is that there’ll be no god-like figure that will come to your rescue. “Priya does not solve anyone’s problems… rather, she challenges us all to solve them,” he says. And that’s exactly what an everyday situation is like. In reality, as people experience it, there is no magic wand to drive away one’s fears. So, it’s encouraging to see a comic book with a protagonist who is not equipped with superhuman strength.

A similar thought guided San Francisco-based Supreet Manchanda and Oakland-based Eileen Alden, who met on the professional networking site LinkedIn, in their quest for creating a ‘turbaned’ superhero— Super Sikh. The discrimination many Sikhs faced in the aftermath of 9/11 motivated them to portray Sikhs in a different light. “It is also the coming of age of not just a hero in a turban, but others that are a reflection of the multicultural makeup of the globe. You have new superheroes in all kinds of flavours. The Marvel character Kamala Khan and Burka Avenger, for instance. So why not a Sikh?” says Manchanda. He and Alden created the comic book, which is illustrated by award-winning artist Amit Tayal. Super Sikh is the alter ego of Deep Singh, an everyday guy who loves Elvis Presley and hates bad guys. The creators both happen to be Elvis fans and believe that because the singer is an American icon, this association makes it easier for people to identify with the superhero and think warmly of him.

Deep Singh is suave and sexy. He wears a crisp turban, sports aviators, and dresses smartly—he’s every bit of the urban, hip guy you can imagine, someone with a multicultural upbringing. “Many Sikhs are macho and fun-loving. We thought it’s important to have that spirit, as well as being a ‘badass’,” says Manchanda. In the debut comic book, Singh is seen taking on a Taliban commander who predictably does not want girls to be educated. Made possible with the help of a Kickstarter (a crowd-funding website) campaign, Manchanda explains our fascination with superheroes and secret agents thus: “Essentially all humans want to believe in the goodness of humanity, and so it’s normal that we support the good fight. In many cases, the underdog winning is still a case of hope.” The protagonist uses his guile, apart from strong ethics and values—things that are fast vanishing from daily life— to win people over. Says Manchanda, “This [enables] children to become [like] him and know that nothing is impossible as it’s not his superpowers but his knowledge and everyday actions that make him a hero.”

In addition to empowering people, Devineni wanted to break free of the masculine superhero fascination most of us have. “My main concern is that most superheroes are masculine, with very passive female characters. Priya’s Shakti is an attempt to create an alternative narrative and focus— Priya is a modern-day superhero,” says Devineni.

He’s not alone. Burka Avenger or Jiya, the lovable school teacher, is the perfect foil for all the patriarchy that exists across the world. Ever since her debut, she’s become a force to reckon with, and is someone children look up to. She is known to have fought the evil local leader Baba Bandook, who wanted to shut down a girls’ school because, you know, educated girls are dangerous. She also spreads awareness of polio and encourages people to realise their strengths and use them. While Burka Avenger is not technically a ‘comic book’ character— she’s an Urdu-speaking animated character—her existence is something that makes you want to believe that change can indeed happen, or is waiting to happen. In fact, Burka Avenger has become so popular we will soon see the series make its debut on Indian television. As of now, one can catch videos on YouTube, which could easily have you bingeing on one episode after another. The award- winning show is the first ever animated superhero series made in Pakistan. The show, which has featured popular Pakistani artistes such as Ali Zafar and Haroon, is also regarded well for its musical score.

In India, Raj Comics superheroes like Doga, Nagraj and Shakti have been here for a long time. A new entrant is Fenil Comics, which has created several heroes who fight corruption, terror, environmental problems and the mafia. Surat-based Fenil Sherdiwala, a readymade garments businessman, is passionate about comics, and decided to branch into comic-book publishing to share his passion with other fans. “I want to encourage the young to help people, and eventually, our country,” he says. Fenil Comics is made for a Hindi-speaking audience, which is clear from the names Sherdiwala has given his characters—Secret Agent Om, Faulaad, Bajarangi, and Stunt Girl. The Hindi comics are currently being translated into English for Android and Apple devices. Sherdiwala will release paperback versions of the English translations too. Fenil Comics has a fan following on Facebook as well.

Independent filmmaker and creative consultant Alok Sharma started as a comic book illustrator in the early 2000s, and has recently written some comics for Raj Comics. He is currently producing and directing a documentary called Chitrakatha, which deals with the evolution of Indian sequential art and comics. Talking about traditional heroes like Doga, Nagraj, Shakti and the influence they have on readers, Sharma says that because they’re all fighting social evils and face personal crises like everybody else, they’re more grounded in reality. Thus, they’ll never go out of fashion. Moreover, at a time where everyone needs a role model, there’s nothing like comic book superheroes to fill that gap. However, Sharma doesn’t seem too confident about their relevance. “When you create a hero with a singular agenda or topic, you have already limited your reach—not only in terms of readership or content, but you also make it very time-bound. A topical superhero/ heroine can never be timeless. It can garner good publicity for the time being, but will it be immortal? I don’t think so.” Despite this, he does appreciate the artwork of Super Sikh, which he describes as ‘awesome’.

The longevity of these superheroes may well be contested, but none of them promotes the idea of a helpless person in dire need of a saviour. The superhero of today wants you to stand up for yourself and choose the evils you wish to fight. That’s half the battle won.