This exhibition may waver in its portraits of people, but it excels in hinting at stories 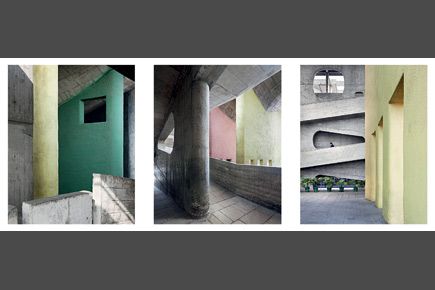 This exhibition may waver in its portraits of people, but it excels in hinting at stories


According to British parliamentarian Benjamin Disraeli, a great city, whose image dwells in the memory of man, is like some great idea. For him, Rome represents conquest; Faith hovers over the towers of Jerusalem; and Athens embodies that pre-eminent quality of the antique world, art. While walking around PhotoInk, I’m thinking about the Indian cities that the gallery has showcased over the past year. Pablo Bartholomew’s Mumbai, or, since the images were from the 1970s, a place still called Bombay. What trembles invisibly over that city? Dreams, perhaps, or resilience. Then, it held an exhibition of Madan Mahatta’s sparse, eloquent photographs of Delhi, which specifically focused on its architectural landscape. How the capital’s buildings embodied the Nehruvian-socialist desires of a newly formed nation. Above these symbols of administrative and governmental power lingered the delicate trappings of hope. Chandigarh, a city (and union territory) that serves as the capital of two states, Haryana and Punjab, is a solid, sleek extension of Nehru’s modernist ambitions, freed from the shackles of history. It was to be Independent India’s first planned metropolis, and, in 1949, Nehru bestowed the honour of planning it on Swiss-French architect Le Corbusier, a famous pioneer of ‘modern’ architecture. His experiments at Chandigarh spurred a multitude of reactions, from awe and admiration to outrage and heated debate over whether a Western eye was in any way better qualified to design and create a space to which he would undeniably be an outsider. Manuel Bougot’s photographs in Chandigarh: Portrait of a City trace the legacy that Le Corbusier and a cluster of other architects such as Pierre Jeanneret, Sharma/Dethe and J Chowdhury left behind.

For Bougot—a Paris-based photographer experienced in fashion photography, advertising and cinema—an interest in Le Corbusier began in the 1980s when he worked with Caroline Maniaque, author of Le Corbusier et les Maisons Jaoul, and was rekindled in 2006 when he started attending talks on Chandigarh and photographed the only building the architect ever built for himself—a cabanon (summer cabin) in Roquebrune-Cap Martin, France. Capturing Chandigarh seemed to be the next natural step. In his artist note, Bougot says that while the tradition in architectural photography has been to eliminate all traces of human occupation or presence, he wanted to present the human element in Le Corbusier’s buildings. To focus on architecture as well as the people who lived in and worked around it. To a point, Bougot succeeds in weaving the lives of people into indifferent concrete spaces. A picture of a room in the High Court shows shelves of dusty, leather-bound law books, grey and dull with age, above which are pasted images of Hindu gods and goddesses, multifarious and vibrantly coloured. At the bottom left of the frame are the tops of plastic tiffin carriers—somebody’s lunch. In an image of a balcony in the Civil Secretariat stands a broken, solitary chair with the sweep of vast countryside behind it. Next to a sculpture at the College of Art is balanced a higgledy pile of bicycles; a shelf of well-thumbed picture books tumble on a shelf at St John’s High School. Bougot is skilled too at capturing people unawares, while they work at their desks or guard a lonely corridor—the group of workers at Punjab University’s Post Office could be playing a scene out of a Beckett play; three men with their backs to the viewer stand in front of a carved out wall in the High Court. Where Bougot’s work wavers is his portraits of people—upfront and formal, they appear ill at ease rather than a natural part of the composition. The blue-turbaned man in Chandigarh Central Post Office; the grey-suited figure at the Government Press Office; the two students in a classroom in Punjab University; the stiffly standing uniformed guard in front of the Legislative Assembly. Their gaze is flat and uninviting, closed off to the viewer.

Where Bougot excels is hinting at stories. Which is why the photographs of private homes in Chandigarh carry a warmth and texture that is absent from the rest. In one image we are treated to the clear expanse of a blue wall, with an arrangement of flowers above a bed, and a painting. In another, a tiny prayer nook with the hint of lace on a chair, an untidy wrap of newspapers. His pictures capture shelves of family photos and heirlooms, and offer a peek into an intimate arrangement of rooms and lives. There are echoes of Dayanita Singh’s Privacy in these photographs even if the interiors explore the effects of Le Corbusier’s style on personal homes rather than opulent luxury. Try as he might though, architecture still forms the primary focus of his images—the clean sweep of lines, the strong curve of a staircase, the elegant arc of a ceiling, the marvellous symmetry of a space. He is unafraid too of showing the debilitating effects of time and climate on something as strong and solid as concrete. Which explains why, at the end, you are left with a sense of disjunction, of how things—nations, people, cities, ideas—start out and where they end up, always somehow less and not enough. What is it that hangs over Chandigarh? Indifference? Defiance?

The exhibition allows you to decide for yourself.

Chandigarh: Portrait of a City is showing at PhotoInk, Delhi, till 27 October 2012