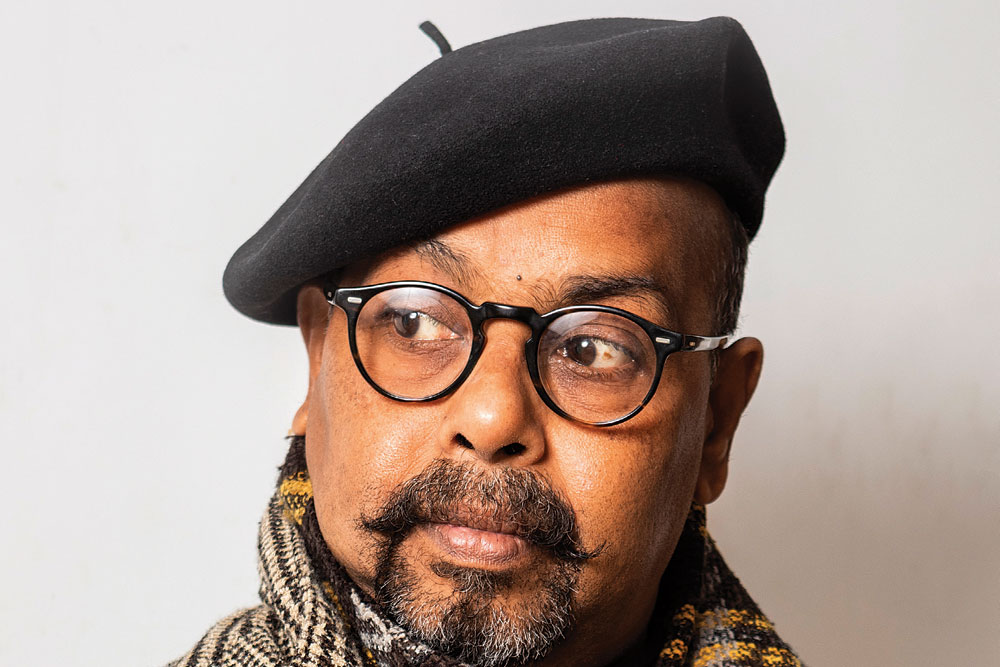 
WHERE PARESH MAITY’S paintings appear muted and controlled, his sculptural art exudes ambition and exuberance. He favours a soft aesthetic on the canvas and a scrappy, industrial exterior for his installations. Nearly five decades into his experiments with art, the Padma Shri-awardee’s work is being presented in two parallel, almost oppositional exhibitions of watercolour and sculpture in Kolkata. To understand Maity’s immersion in both mediums, one must start with the story of a town 85 km outside Kolkata, with fewer than 70,000 residents.

Maity’s hometown, Tamluk, is a place lush with natural water. “The first thing I ever painted was a boat,” he tells me over the phone as he exits the din that pervades his sculpture workshop in Noida. It was in Tamluk that he discovered an affinity for water. “Water is life itself,” he muses, “I grew up surrounded by lakes, ponds, rivers. So, as a child, I realised that water is in me. I love any place that has water in it.” The artist’s obsession with the element was furthered by the “multidimensional feeling” it brought to a scene through surface reflections and shadows in its depths—layers that Maity’s quiet strokes depict with deceptive simplicity.

Noise of Many Waters brings together 125 of his paintings, landscapes from across the country and the world, made over the decades. There’s a stillness in these paintings that appears to come from the fact that Maity is familiar with the places he paints, visiting many of them multiple times, which seemingly gives him the ability to capture their shifting moods and fragile essence. There’s an acknowledgment in these works that the light is always warping the nature of what we see, effecting the depth, clarity and distance of our gaze over the expanse of an ocean, the snaking lines of a river and a mountain nested in a range.


“I grew up surrounded by lakes, ponds, rivers. So, as a child, I realised that water is in me. I love any place that has water in it,” says Paresh Maity, artist

As a painter, he is drawn to how we respond to nature. It was in Tamluk that he first saw how people seek out the banks of a river or lake for comfort, peace, even a cool breeze. He says, “You see Marine Drive in the monsoon, you see how it creates beauty. People love to get wet in that rain. Similarly, people love to see a cloud or the reflection of Kolkata’s Victoria Memorial on the water.” As both a painter and a sculptor, Maity has produced straightforward art, which draws heavily from everyday experiences and sights. The complex processes and techniques he uses to arrive at his art remain hidden beneath this simple façade.

Rakhi Sarkar, director and curator at CIMA Art, where the watercolour retrospective will be shown, shares that she first heard of Maity early in his career, “In the late ’80s or late ’90s, my aunt, Amala Sarkar, who was a professor at the Government College of Art and Craft in Kolkata asked my husband and me to keep an eye on him as he was extremely talented.” CIMA opened in 1993; Sarkar met Maity around 1995 and recognising his talent, she began showing his work regularly. “We started with his first solo in 1997 titled Paresh Maity: The Formative Years. I am in love with some of his earliest works,” she says, “Stunning! Minimalist and extremely profound! He has evolved dramatically over the years.”

Winning the Padma Shri in 2014 made him realise that he wanted to give back, to bring people joy and solace, and this retrospective of his paintings demands attention be directed to the fragile beauty of natural ecosystems and the people who populate spaces that are increasingly bearing the brunt of the climate crisis.

Tamluk’s populace has long been associated with the making of terracotta idols for festivals. Maity was seven when he began to mould birds, toys and idols to sell at the local fair after learning the craft by observing idol makers at work in the months leading up to Durga Puja. The money he earned for his wares helped sustain him and his early interest in art. Now, he works in a space resembling a factory with tools, ladders and equipment in every corner, and expert welders and cutters working alongside him. “A sculpture can sometimes weigh three tonnes,” he says, needing a crane and a small army of people to transport it. Every Sunday, dodging the weekday traffic, he travels to Noida to cut, cast and create.

Showing at Birla Academy of Art & Culture Lawns, CAST will showcase several larger-than-life sculptures Maity has worked on after decades of concentrating on watercolours. Somak Mitra, director of Gallery Art Exposure, which is co-presenting CAST, recalls seeing a Maity sculpture, a lifesize bell house, for the first time in 2014 at a Cartier show in St Moritz, Switzerland. He recalls, “For me seeing this structure amidst other art forms from across the world was very arresting and, in a way, emotional. It spoke of a strong Indian essence that represented solidity, rootedness and ethnicity [that is] so characteristic [of], almost elemental to Paresh Maity’s creations.” It was when he discovered that the artist who had made his name in painting had actually started out as a sculptor that he began to encourage Maity to put together a sculpture exhibition which would include his past works as well as six installations created for the show. “No one has featured his sculptures on this scale,” says Mitra.

“Eighteen years ago, I felt sculpture bubbling up in me again,” Maity explains, “Sculpture is wonderfully multi-dimensional—you can create air spaces, pockets of light. There is a lot of scope for play.” The exhibition features metal sculptures that are first shaped in mud and later cased in metal. The focus of these artworks is everyday sights, travel being essential to his life and artistic practice. Explaining the origin of his sculpture titled Spice Route, he says, “When one is driving on the highways of this country, especially away from the larger cities, one will see tempos carrying beautiful red chillis.” Bearing in mind that, he adds, “Spice is integral to our life. We can’t imagine our cuisine without spice,” he created a work that instantly brings to mind the farmers of this country, interstate dependence and the paradoxical neglect of an industry this country is so reliant on.

He collected and dismantled approximately a hundred old Royal Enfield motorbikes, and combined their parts with old ceiling fan blades, to create a swarm of 50 giant metal honeybees. Inspired by the increasingly critically endangered species, he sought to show their “consistent, productive, disciplined and united” nature. Another striking piece in the exhibition is modelled after a common avenue tree—the laburnum. On his morning walks, in the months between March and June, Maity would admire the flowering tree. But it was in the season after the flowers had fallen and the tree hung full of reed-like seedpods that he found the tree truly striking—it looked like a “living sculpture” to him.

In contrast to the communal nature of sculpture and the bustle of his workshop, he describes his art studio in Delhi as his temple. Only his art and he occupy that space—“I need loneliness and uninterrupted peace.” Despite living intermittently in Delhi for the last 30-plus years, Maity says, he doesn’t really have a base. He often paints and sketches wherever he is—whether in Banaras or Japan—carrying his brushes and colours with him. His paint works are up to three ft when he travels while larger works must be done back home. Sometimes, he will go to Santiniketan or a place in Rajasthan with his material and is able to paint large canvases. “You have to know what you’re doing and do it in one sitting. I paint wet-on-wet, which has the softest effect, so the work must be done in a single sitting. If done in another sitting, the water will have dried, and you won’t be able to match the previous coat,” he explains. Watercolour remains an unpopular medium for artists because of this limitation. But Maity remains charmed by the medium he’s been engrossed in since school, marvelling at how just a few drops of water combined with paint can create a powerful piece of art.

The inescapable precariousness of the process means that some works simply do not work out. A single stray drop of water or a stroke not applied before the water dries out can ruin a painting. Maity holds on to these paintings, pulling some out after many years. “I take out the paper or the painting, I see something different [after time has passed] and it turns into a different painting. After 50 years, you come up with your own R&D about how to transform it into a new artwork. For example, I do a day painting of Banaras, but some little bit has gone wrong. I convert that into a twilight painting where diyas are coming out for the day.”

Though he photographs and sketches while he travels, he considers those pursuits valuable for their own sake. The works he creates in his studio are aided by memory rather than created by referring to these. “I have been going to Banaras for 36 years. I have memorised everything, what which ghat is like, how it looks in the morning, how it looks in the evening. I sketch for the sketch itself. I never transform that into a painting. Painting is something that comes spontaneously on the spot,” he clarifies.

“I paint wet-on-wet, which has the softest effect, so the work must be done in a single sitting. If done in another sitting, the water will have dried, and you won’t be able to match the previous coat,” says Paresh Maity

One of the ways in which Maity has kept evolving is by playing with scale. He explains that the larger a painting or an installation, the greater the struggle as things are no longer at eye level and proportions are harder to ascertain. But he finds this pursuit rewarding because it sometimes leads to breakthroughs—innovations that make the piece work. There are completed sculptures that occupy around 400 sq ft, and there are paintings that extend to eight ft.

Standing in front of his paintings in Kolkata as they’re readied for the exhibition he says, “Sometimes, I wonder, ‘Is it really true?’ The childhood dream has come here. There are paintings here that I did in school. And then there are paintings I have done recently which are huge. Not just that. There are paintings from London, Venice, Kerala, Bombay.” The awe in his voice isn’t feigned as he surveys the surreal journey his art has taken over the decades.

(Noise of Many Waters by Paresh Maity runs till December 11th at CIMA Gallery, Kolkata, and CAST runs from November 13th till December 16th at Birla Academy of Art & Culture Lawns, Kolkata)