Can Carnatic Music be de-Brahminised?

The caste of sound 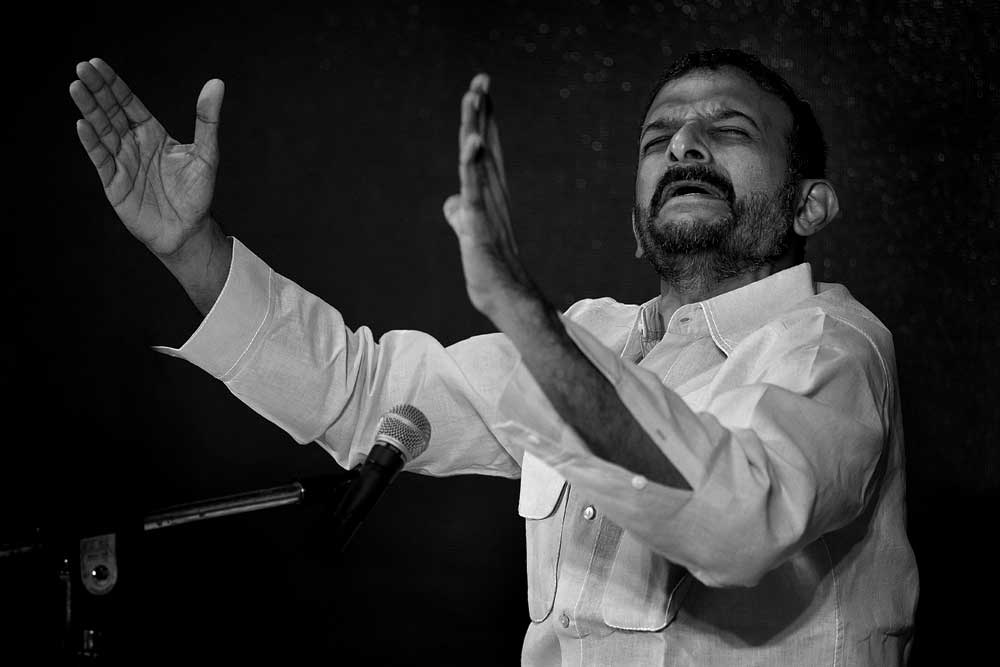 SOCIAL AND CULTURAL markers are drafted into every art form’s internal structure. In every aspect of art, from learning to performing, they are passed on from generation to generation. Control systems are not external pressures; they are devised into the art and, through stories, images, presentations and performances, internalised by everyone who belongs.

Let me speak from personal experience. I am Brahmin and therefore a lot of what I received in music class, at Carnatic concerts and in conversations was only an extension of what I believed to be ‘normal’ culture. It was only in retrospect that I identified these as methods of indoctrination. Those who propagate these beliefs are not conniving or manipulating; they are just convinced that this is how it should be.

A Carnatic music class is not a place for musical exchange alone. It is a cultural space, a caste-specific cultural space. From the way students are expected to dress to the pictures that decorate the walls, the environment informs you of what is the norm. Girls almost always had to be dressed in salwar- kameez or what we call pavadai-davani (half-saree) in south India. There was no question of any other attire as far as girls were concerned but teenage boys could, of course, get away with jeans or even shorts. I also know of some (rare) teachers who insist that boys too have to be dressed in dhotis. The pottu (bindi) is an absolute must. If not worn, the girl may be handed one by a friend or the music class would be converted to an ‘our culture’ class. This is exactly how Hindu boys and girls are expected to dress when they enter temples. Now, all this has very little to do with music but is bundled in as a show of respect for the music. Carnatic music is, in their minds, Hindu—Brahmin—music! The classroom walls will not only have pictures of the great composers, but important Hindu deities too keep watch over us. I have never seen Hindu gods or goddesses such as Mariamman (a non-upper caste goddess) find a place in a Carnatic music classroom.

As we learn compositions, the teachers explain the meaning of the lyrics. Since most of Carnatic music is Hindu in content, we are also learning mythology. But it does not stop there. The composers are deified (avatar purushas), and folktales about their magical deeds are shared. At the end of a few years, we are convinced that they were superhumans who composed through divine benediction. Absolutely everything about them is perfect, morally correct and spiritually elevated. Missteps, if any, were only tests conducted by the divine overseer. A lesson for all of us!

This does not stop with the class. Attend a music concert and the stage, the homogeneity of the upper-caste audience, the nature of conversations, the introductions by the impresarios and the appearance of the musicians will make you feel like you are attending a Brahmin congregation. Whenever Carnatic musicians speak about their art, they invariably invoke deities and present themselves as priests or Vedic scholars. A few musicians have gone to the extent of distributing vibhuti to their fellow artists on stage. Musicians will, more often than not, speak of the composer’s bhakti and the infallibility of these great souls.

If the repertoire of Carnatic music could be expanded to bring in compositions that gave us very different ideas of living voices from across the social spectrum, instantaneously the conversation would be enlarged

A closer peek at the dais and up on the platform will reveal the entire pantheon of Hindu gods. I do not mean to criticize faith but the undeniable conflation of religion, caste and art comes to light when we pay attention to these habits. It is not just about praying to the gods for a successful concert. This merger on a concert stage makes everyone conflate art and faith, making art entirely dependent on belief.

We refuse to accept the music as just art. In fact, saying such a thing is blasphemous and hence musicians have to create the impression of being moral, pious creatures even if they are not. Or, maybe, like all of us, they compartmentalize their various selves. Even today, women musicians feel the need to de-sexualize themselves and radiate piousness. This is taken as a sign of their seriousness towards the art form. The less skin you reveal, the more divine your music. All this is bulldozed upon them in the name of appropriateness.

The presentation of a Carnatic concert is a representation of Brahminical culture. The modern structure of performance came into being in the early twentieth century and was propagated by vocalist Ariyakudi Ramanuja Iyengar. Reasons attributed to this restructuring include reduced concert length, shift of concerts to urban proscenium stages and introduction of microphones. But, beyond these external needs, the structure was deeply influenced by the religious and moral values of the upper- caste Brahmin.

It is not just the performance; discussions and lectures on Carnatic music also hover, more often than not, around deities, rituals, Brahmin festivals, tantric practices and the sainthood of the great vaggeyakaras (composers). Listening to a Carnatic concert is not mere exposure to the music; it is a complete Brahmin brainwashing package. The Tyagaraja aradhana—an annual festival that pays homage to the eighteenth-century composer Tyagaraja, held in Thiruvaiyaru, and now in every remote town across the globe that has a sizeable Carnatic- interested Brahmin population—is a classic example of how claustrophobic an art form can make itself.

A note of caution to my Hindustani and other ‘classical’ counterparts in case they begin patting themselves on the back about the openness of their art form. Let me make it clear, every art form is opaque and sullied by human social organization. Just dig a little deeper into your self, and you will find a similar mess. I cannot elaborate on every art form’s inner working here; it is up to people engaged in each to search with earnestness…

This inquiry cannot stop here. All these abstract thoughts have to be connected to what we are and what we do. Otherwise they are, as the critics would say, just emotional ruminations.

The Tyagaraja Aradhana, an annual festival that pays homage to the composer Tyagaraja, is a classical example of how claustrophobic an art form can make itself

Why was the music not enabling many more such experiences? We were enjoying the music and heading home happy but nothing more was happening through the art. As I began probing my engagement with the art, I realized that everything that was built around the art—the scaffolding, paraphernalia, social constructions—were barricades. As a Carnatic singer I had to role-play, act as an interlocutor between my community and its moral, religious and cultural moorings. Every time I rendered kirtanas, expounded ragas or cracked arithmetic patterns, I was holding up my community flag and waving it with gusto. The entire environment participated in this celebration. There is no doubt that the music was beautiful but that it was constricted is also true.

THIS LED ME to a long journey into the archives of Carnatic music, its musicology, practice and social history. I was troubled by the thought that the music might collapse if I were to remove all its social anchors. I was seeking proof of a musical core, the actual components of the form that give life to this art—those elements that make it what it is and will remain irrespective of everything else that it may shed or acquire. I had to also be prepared for the possibility that there is no such truth. In which case, all these experiences would mean nothing.

But I did find something. Carnatic music depends only on three cardinal elements—raga, tala and the text. Art happens when the musicians and the audience remain drenched in the aesthetic charge that emerges from this tripartite correspondence. I know I have simplified what is a far more complex interplay but, in the context of this discussion, this ought to do. I speak of the art I know but every art form has an elemental self. Everything else has been organized to suit the people who assemble, perform and consume the art. In the need to satisfy community needs, aspects of music have been given slipshod treatment. So the glittering paint that covers the art not only reflects ornateness, it also hides the art’s sanctum sanctorum. If any artist is willing to shake off all those exteriors, delve into the art, rediscover its marvels and bring back to the fore its aesthetic strengths, then suddenly the art is rejuvenated and its secret vault revealed.

You could ask if this means discarding Tyagaraja or Muttusvami Dikshitar. It is not a question of disposing of the past. There is no denying that there are many aspects on which I am at loggerheads with them. Tyagaraja was an extraordinary composer, yet amidst the musical genius is his Brahminical import. He was a product of his social boundaries and we need to understand that. The problem arises from the fact that his understanding is accepted as the gospel truth by the insiders, requiring everyone to be in agreement with his thinking. The art’s protectors believe that other viewpoints do not have a space here and that their very presence is polluting. This is one of the problems even with the spiritual—it can be casteist and doctrinaire!

What I sought was contestation. Can Carnatic music become a platform for social, cultural and political views that put Tyagaraja’s thoughts in the dock? If the repertoire of Carnatic music could be expanded to bring in compositions that gave us very different ideas of living—voices from across the social spectrum—instantaneously the conversation would be enlarged. It was not just about newer voices; we also had to retrieve lost voices. The erotic compositions sung by the Devadasis and other Carnatic compositions that were not rooted in bhakti have to be brought back to centre stage and the structure of performance needs to questioned. This churning is still respectful of raga, tala and text but creates discomfort and vulnerability. The homogeneous upper-caste followers of Carnatic music may reject, disregard, criticize these attempts but they will provoke discussion. That is the first step.

There are some who wonder whether an artist has to be loud and open about art’s divisiveness. ‘Can we not just do this quietly, in the way we make art and not announce it to the world?’ Yes! It is distinctly possible, but the danger in this hide-and-seek is that the art world has an instinctive ability to snatch from undeclared counter- movements its energy of questioning. Before we know it, the silent artistic protest will be turned into a proclamation of the art’s perfectness and the artist will have become a champion of the art’s impartiality.

I apologize for this personal foray but any social change begins with personal conflicts and I had to bring to the table my own uncertainty before we looked at the larger picture.

TM Krishna
TM Krishna is a Carnatic vocalist, the author of A Southern Music, and a writer on contemporary issues