The much-hyped Kolkata Book Fair has turned from a cerebral showcase to an annual fair of binging on a variety of food. 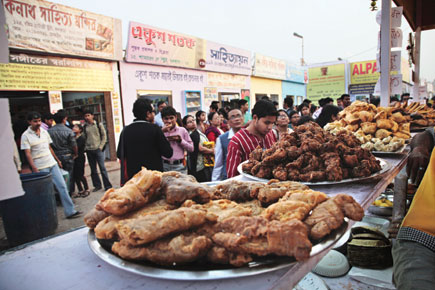 The much-hyped Kolkata Book Fair has turned from a cerebral showcase to an annual fair of binging on a variety of food.


The much-hyped Kolkata Book Fair has turned from a cerebral showcase to an annual fair of binging on a variety of food.

Boi dakche boi… (Books are beckoning…) Thus starts the theme song of the Kolkata Book Fair, said to be the world’s largest non-trade book fair, thanks to the 125,000 footfalls that the 12-day fair registers daily. The Publishers & Booksellers Guild, organisers of the fair, and all Bengali bhadralok from Chief Minister Buddhadeb Bhattacharjee to the man on Kolkata’s dirty streets cite the footfalls at the fair to buttress Bengal’s claim to pre-eminence in matters intellectual.

But that’s all bunkum. Fact is, an overwhelming majority of those who throng the book fair end up eating food rather than purchasing books. It’s the food, and not books, that beckon most to this annual, much-hyped fair. The 20-odd food stalls at the fair do more business everyday than most of the 650-odd stalls set up by publishers and booksellers. In fact, the ten larger food outlets register a higher turnover than the ten top publishers put together. A bit of figure crunching proves this: the 650 bookstalls posted a Rs 1.7 crore turnover at last year’s fair. The combined turnover of the 20 food stalls, on the other hand, was nearly Rs 85 lakh. Thus, on an average, a bookstall sold books worth a little over Rs 26,000 at last year’s fair, while a food stall did business of Rs 4 lakh during the 12-day stretch.According to some members of the Guild, many of the smaller publishers and sellers barely meet their expenses at the fair. None of the food outlets have any unsold items at the end of each day. No bookstall can boast of serpentine queues; on weekends, visitors have to wait at least 30 minutes to place their orders at any food stall.

A reality check at the sprawling 600,000 sq ft bookfair grounds at Milon Mela backs up the statistics. Arambagh’s, a popular food chain, has an ambitious daily sales target of Rs 1 lakh. The large stall it has set up sells chicken dishes and snacks ranging from chicken burger and tandoori chicken to spring rolls and kathi kebabs. Wildly popular, this stall attracted about 1,200 customers on Sunday, more than double the number of those who bought books from even the larger publishers like Rupa & Co or Standard Literature Co. “We are sure of achieving our daily target by the time this week draws to a close,” says the manager of the stall, where customers were seen waiting for at least 20 minutes to purchase food coupons on a weekday evening. “The waiting time is more than 30 minutes on weekends,” the manager adds.

At Benfish, a food chain selling primarily fish preparations and run by the state fisheries directorate, Kolkata’s fish-loving foodies gorged on snacks worth more than Rs 60,000 last Sunday. The array of snacks on offer is mouth-watering indeed: fish fry and fish finger to cutlets, rolls, prawn pickle and even dry fish. Benfish does more than double the business a day than a stall by another state-run body, the West Bengal State Book Board does during the entire duration of the Kolkata Book Fair.

“We could have sold much more had we got a stall at a better place. We’re located at one corner of the grounds and many visitors can’t find us,” laments Benfish stall manager Sushanto Mondal. This is a grouse nursed by all other stall owners and managers. “The food stalls are too dispersed. We should be allotted space at a prominent spot preferably in the middle of the fair grounds, where tired and hungry visitors would have no problem finding us,” complains Arambagh’s manager. They’re all planning to ask the Guild to allocate better space to them next year. Given that they’re such mega draws, the Guild may well be compelled to grant their wishes. Because the Kolkata Book Fair minus the food may just become a tepid event.
The sheer variety of food at the stalls would put any food fair or food court in any upscale mall to shame. Royale Confectioners has a delectable range of pastries, patties, pizzas and burgers, Poush Parbon sells thalis of khichdi, fried eggplant, ghee and chutney, pulao, fried rice, Chinese dishes and momos. Annapurna Caterers takes the cake with everything from South Indian snacks and chicken pakoras to kachoris, puli pitha (a Bengali festive delicacy) and pav bhaji. “We’re selling food of about Rs 50,000 on an average everyday. None of our food is unsold and we have closed down much before the fair ended at 8 pm on Saturday and Sunday,” says Sambhu Das, the manager at the Annapurna stall. Then there’s Ali Baba selling Moghlai dishes, KC Das with its signature Bengali sweets, Haldiram’s with its snacks, sweets and namkeens, cookies and boletos, Grub Club with its exotic and hugely popular Mexican fare (this stall did much more business and got many more visitors than the attractive pavilion set up by Mexico, the theme country at this year’s fair), and a lot more.

Guild members admit that barely 6-7 per cent of the visitors, or less than 11,000 people (going by last year’s total of 1.5 million visitors), end up purchasing books at the fair. And if the sales figure of Rs 1.7 crore is considered, the average sale of books per buyer was a modest Rs 1,500. “Actually, the sales per head on an average is much less, maybe about Rs 300 to 400 generally, since institutions like libraries and some wealthy book-lovers account for more than 40 per cent of the sales,” says an accountant at Dey’s Publishing, one of the bigger participants. But none of the visitors leave the book fair without eating, or at least having a beverage, says a prominent member of the Guild who doesn’t want to be named. Most of the visitors, he adds, visit some of the prominent stalls in a perfunctory manner. “Of the total number of visitors we get, about 12 to 15 per cent browse through the books on display seriously. Most go in for paperbacks anyway. Serious book-lovers are few and far between,” observes an employee at the UBS Publishers & Distributors.

While food stall owners would scale down their sales figures for obvious reasons (many don’t issue proper receipts), a rough calculation based on the figures they give out shows that each stall caters to an average of 1,500 customers every day. Thus, about 30,000 people buy food from the food stall every day, while just a little over a third of this number bought books during the entire duration of the fair last year!
By the time the ongoing 34th edition of the Kolkata Book Fair ends on 7 February, over 360,000 people would have eaten at the food stalls, and about 3 per cent of this figure would have bought books. Another sizeable section—the young and nubile—finds the fair grounds a good place to romance, as is evident to any visitor. It’s high time, thus, that the bhadralok drop their pretensions and admit that the Kolkata Book Fair is actually a food fair where books are also sold.

And the theme song could be: “Boi dakche boi, chalo khete jai…” (Books are beckoning, let’s go to eat…).