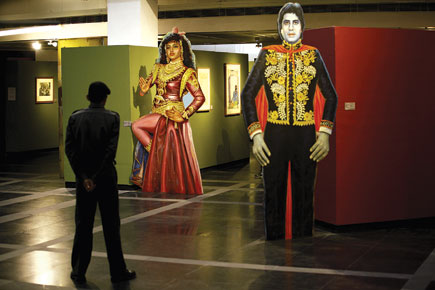 The Bhupen Khakhar exhibition at Delhi’s National Gallery of Modern Art (NGMA), which runs until the end of March, is not as exhaustive as it might have been. It is, however, well timed. Khakhar, as even this limited selection of his work makes clear, was a remarkable artist— a self-taught painter with little fear of formal experimentation and a playful approach to artistic traditions. But he will always be especially remembered for being the first Indian painter to openly express his gayness.

On 2 February this year, the Supreme Court of India referred a curative petition about Section 377 to a five-judge bench, setting the stage for a potential rethink of the 1860 law barring ‘carnal intercourse against the order of nature’ that turns consenting homosexual adults into criminals. Other than a brief window between July 2009, when the Delhi High Court read down Section 377 (rendering it ineffective), and December 2013, when the Supreme Court over- turned that judgment, homosexuality has been illegal in independent India. It was in this India that Bhupen Khakhar, born in 1934, came of age, lived and loved. The youngest child of a not-very- well-off Gujarati family in what was then Bombay, Khakhar’s father died when he was four, and he was brought up by his mother, a housewife. He studied Economics, and qualified as a chartered accountant in 1956. Four years after that, in 1960, he started to attend evening classes at the JJ School of Art. Although he had already begun to paint seriously and was friends with several artists, most significantly fellow- Gujarati Ghulam Mohammed Sheikh, it was a huge decision for Khakhar to leave the hard-earned financial security of his job. He finally moved to Baroda in 1964, enrolling for a Masters at MS University. But he specialised in Art Criticism, thus remaining strictly self-taught as an artist.

At a symposium held just before the NGMA show opened, the artist Nilima Sheikh —married to Ghulam Sheikh and a close friend of Khakhar’s —spoke of how he turned his limited drawing abilities around to create “one of the most unique figurations in modern Indian art”. The artist Nalini Malani, also a good friend, agreed that Khakhar was painfully conscious that he didn’t quite have the craft down pat: “In order to learn, Bhupen drew from life all the time—the people he met, the clothes they wore, the food they ate…”

But Khakhar’s self-taught-ness, it seems to me, revealed itself not so much in his almost naïve human figures, but in his openness to experimentation. The NGMA exhibition includes etchings, lino-cuts, watercolours and oil paintings— and you can see the immense variety of registers he tried out, from the realistic to the quixotically surreal, from small-scale sketches in black-and-white to giant canvases in unapologetically brilliant hues. The artist was also a collector, and the NGMA show puts on display two sections of this personal archive, which reveal the eclecticism of his engagement with existing visual culture: painted Hindi film posters from the 60s to the 80s, and paintings from the Nathdwara tradition, depicting Krishna as Shrinathji. Though primarily a painter, he made joyful forays into all sorts of forms: the NGMA show itself has samples of his work in ceramic, two upholstered chairs he painted on, two giant cutouts of Amitabh Bachchan and Rekha with Khakhar’s art on the reverse, and a proto-installation called Paan Beedi Shop. This last is a life-size model of a streetside shop stocked with cigarette and tobacco packets. One outer wall is covered with a painting of two men puffing away in companionable silence: one wears a kurta-pyjama, the other a baniaan and dhoti. The delightful caption—for that seems the appropriate word—reads: ‘Smoke Gets in Your Eyes’.

Paan Beedi Shop also points us to two of Khakhar’s preoccupations. One is stylistic, the other thematic. The stylistic device I speak of is his use of text to annotate, underline, or playfully subvert his visuals. Among the early untitled etchings at the NGMA is one of a face with protruding teeth, caught in a web of Gujarati text. Sometimes words serve as signage, like in his portrait of an auto driver: a Gujarati road sign locates the auto somewhere between Vadodara and Ahmedabad. Another etching plays cheekily on the calendar print: a god-like being holding a sudarshan chakra and a sword, surrounded by phrases like ‘Shubh’ and ‘Jai Bharat’, is rivalled by a pair of clocks. Other etchings use English. In one, two men wearing identical clothes sit together on a sofa, tender and dreamy-eyed. The handwritten scrawl below them reads, ‘They loved each other so much that they wore the suit boot of the same design’. Khakhar’s later works didn’t use text as much, but his tongue-in-cheek, free-form, Indian idiom began to appear in titles—the iconic You Can’t Please All, or Good Taste Can Be Very Killing.

The thematic preoccupation that Paan Beedi Shop underlines is the life of the Indian street. As illustrated by some of his most famous paintings, such A View From the Tea Shop (1972), Khakhar was a ceaseless observer of our urban spaces, of those who inhabit them and make them habitable for others—tailors, barbers, sweetsellers, auto-drivers, wandering sadhus. Several works at the NGMA show share this theme. In one untitled pen-and-ink sketch, a man gets a haircut from a roadside barber. Sadhu with Red Towel focuses our attention on the specifically Indian ways in which nakedness is made unremarkable. Several works portray places of commensality: teashops, streetside eateries, cigarette stalls. In one lovely etching, two men share a mound of food, one of them leaning back with an air of contentment even as a server seems to approach with more. In one large sketch called Celebration of Guru Jayanti (the NGMA curators should have clarified that this is an outline study for Khakhar’s 1980 oil painting of the same name), men occupy the streetscape in groups—chatting, smoking, eating, resting in companionable silence.

Khakhar’s exploration of this male homosociality—for this is the Indian street, of course, and women rarely lay claim to it—seems to me organically linked to his depictions of the homoerotic. Some of these latter images are oblique: consider one pale watercolour image of a pair of men—one half-hidden under a car, the other standing atop it with a hose in his hand. Or the celebrated oil painting Sewa, also on show here, in which a younger man presses the legs of an older one, in the manner of a devoted shishya for his guru. Set in a magical garden setting, Sewa glows with a certain beatitude. It also captures something of Khakhar’s attachment to the figure of the older man: a relationship of love, but also of care.

Khakhar’s own long-term relationships were with older men, usually Gujarati men from the lower middle class: figures often enshrined in his painting. Portrait of Shri Shankarbhai V Patel near the Red Fort is one such early work, on view at the NGMA show. Large, flat areas of colour alternate with precisely rendered trees, the fort’s wall marks the skyline. The bespectacled Shankarbhai is thus inserted into a miniature setting, looking in the direction of a temptingly laid out dish of fruit. At the symposium, the artist Vivan Sundaram spoke of Ranchhodbhai, who ran a teashop next to Khakhar’s house, and was the subject of Ranchhodbhai Relaxing in Bed (1975). Not on view at NGMA, it is a painting that the artist Atul Dodiya remembers making a huge impact on him when he saw it at Bombay’s Jehangir Art Gallery as an art student in 1979. “I felt,‘Wow, I know three Ranchhodbhais in the chawl where I live. And all three look the same.’ I thought, ‘I have never seen anything like this before—the white space, the little colour, the subject.’ This was a Gujarati painting.”

Khakhar’s resistance to the usual social barriers was integral to his everyday life. The doctor Harsha Hegde, one of his much younger friends who is now part of the trust from which Khakhar’s work is on loan, remembers how the artist actually preferred to work surrounded by people: “He would be helping the children— the neighbours’, or those of his cook— solve mathematical problems, while also painting explicitly gay paintings in the same space. Dinner [at his house] could include me, an artist,and also a gardener, or a gentleman who was serving tea.” He lived what was, to the outward eye, an ordinary middle-class Gujarati life. The refusal to compartmentalise the different parts of his experience extended to his art. He may have fallen in with a crowd of modernist artists, but he retained a profound interest in the religious. This remarkable openness led him both to visual traditions—Nathdwara miniatures, or pilgrimage maps, like the one of Junagarh in which he painted the saint-poet Narsi Mehta—and to lived experience. One of his lovers was a Radhasoami follower, and Khakhar accompanied him to Agra to attend the sect’s gatherings. For Khakhar, sexuality could not, would not, be divorced from other aspects of his being.

Towards the end of his life, Khakhar battled cancer, the motif of suffering entered his work. The exhibition has examples of this theme: the stunning Blind Babubhai (2001), its bright yellows mottled with red; the placid but bloody Injured Head of Raju (2001); the massive diptych Beauty is Skin Deep Only (2000), which opens up the skin’s surface to show us the nerves and tendons beneath; and Bullet Shoot, perhaps the largest frame on show, in which one figure shoots at another, spilling a mass of guts and blood. Perhaps these are mirror images of each other? The shooter, too, has injuries: the body is destroying itself. Even on the verge of breakdown, the self is multiple.