Bards of the Desert 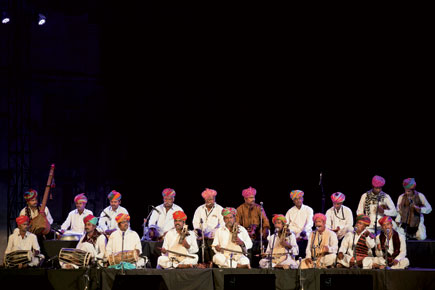 Almost 30 musicians of various ages fill the stage at Jodhpur’s Mehrangarh Fort, instruments aloft and hands extended as they build to that grand crescendo particular to every great song. The various wind and string implements of the Manganiyar community throb—the dholak, dhol, khartal, morchang, murli, shehnai—and the audience appears to approach Sufi-worthy ecstasies. World music writ large, literally; superimposed over the fort’s crenellated walls are the faces of some of these same beturbanned men, the voices of popular music event Rajasthan International Folk Festival (RIFF, the acronym by which it is popularly referred to).

“I have done this since I was a child,” says folk singer Kheta Khan Manganiyar. “This is all we know how to do. If we were businessmen we would do that I suppose. Where the music is good for my work, I will go.”

He will play first with members of his troupe, and later with Shooglenifty, themselves a contemporary Celtic folk band, in one of the traditional jugalbandis RIFF encourages. The Manganiyars, a community of court musicians who converted from Islam hundreds of years ago, are practitioners right from the beginning, passing their trade from one generation to the next, through songs that form an oral history. There are old stalwarts like 75-year-old singer Hazi Khan Bhutika, from Jaisalmer’s Bodana village, among the most knowledgeable artists of the Manganiyar community, with a large repertoire that includes jaangda, Sufi kalaam and Sindhi poetry—unable to accept countless invitations to perform abroad as he is afraid of flying. And 71-year-old Hasam Khan Manganiyar from nearby Betina, who plays the kamaycha and loves Raga Sorath, another wizened virtuoso who helps make up the knowledge bank of their profession.

And how they have travelled. “We have played in Japan, France, everywhere. We have many fans, our names are written big on posters all over Europe,” says Kheta. “And we enjoy playing with all kinds of musicians; all of it is about making music.”

Kheta is a commanding druid of a singer, possessed of a powerful voice and considerable stage presence. Part of one of Rajasthan’s most contagious cultural exports, he is at once manager, musician and cultural curator, as well as the current leader of the Manganiyars. Combining influences ranging from Persia to Punjab, they are rustic yet infectiously accessible— and highly marketable. Hailing from Jodhpur, Barmer and Jaisalmer, that haunting last frontier of the desert, they are spoken of in the language of cultural curation as a tradition that needs to be preserved—yet they persist in the mainstream through forums like global music festivals; Royston Abel’s The Manganiyar Seduction, an international touring theatre performance featuring 40 Manganiyars; and Amarrass Records, a Delhi-based world music label which leans heavily on the Manganiyars. In fact, Abel’s new The Manganiyar Classroom has already moved the focus on to the next generation, featuring children who are musicians.

‘The Manganiyar splits notes into improbable fractions, keeps beat with his eyes, shifts tempo as suddenly and effortlessly as a gust of desert wind moves a dune,’ says the Amarrass site, described as the effort of two city-dwelling 30-somethings who wanted ‘to make traditional folk music cool enough for India’s urbane’ (Motherland). The patrons have indeed changed, from old royals to young hipsters around the world; moved from durbars to auditoriums. The stars of festivals like RIFF, run by Jaipur Virasat Foundation (JVF), a charitable trust which works with traditional artists, these folk musicians are the laal maas (a local Rajasthani mutton dish) which accompanies every other offering; last year, they gave a virtuoso joint performance, almost spontaneous, with the Gypsy Allstars, musicians who are part of the renowned musical group the Gipsy Kings. Several Desert Music Festivals (run by Amarrass since 2011), RIFFs and many international performances later, what do we make of the presence of Manganiyars in the world music scene?

“Not all Manganiyars are at the same level as, say, Gazi Khan, Gewar or Kutle Khan—these guys are still the exceptions, yet their successes lift up the reputation of the whole community,” says Georgie Pope, press officer for the Glastonbury Festival and an acoustic harp player who takes tourists around Rajasthan’s musical landscape through her travel company, Sound Travels. She has known the Manganiyars for years, and curated little concerts at nightclubs and private gatherings—importantly, taken groups of travellers directly to the musicians’ hometowns. “‘Modern’ audiences love them. The Manganiyars, as well as Langas, Naths, Bhils, and various other communities who are reaching out to new, non-traditional patrons, have been clever. They foreground rhythm for ears not accustomed to Rajasthani melodies; they extend alaaps and show vocal dexterity for ears that don’t understand the language. Musicians have always had to adapt their music to suit changing patronage, and the Manganiyars have been particularly successful in doing so.”

Part of this is moving with the trend. “You didn’t have Sufi festivals earlier, or Coke Studio. Whatever else is going on, the changes we have had; you see the same changes mapped along with the Manganiyars. Records have been released for 30 odd years, going back to the early 80s,” says ethnomusicologist Shubha Chaudhuri of the American Institute of Indian Studies (AIIS), whose Archives and Research Centre for Ethnomusicology has recorded radio programmes with the Manganiyars on community radio and produced a research-based series around them. “Only a fraction of that community, however, performs on the global stage. Traditional music is still threatened, in local spaces and amongst other musical communities in India.”

This, of course, makes them valuable to festivals and cultural platforms. “They are a big part of RIFF. Every year they are an essential part of programming,” says Divya Bhatia, RIFF’s festival director, who speaks of Rajasthani collaborations with Celtic Connections in Scotland, the Forde Festival in Norway during the Commonwealth Games, at WOMEX in Spain later this year. Chief among the local artists, of course, are the Manganiyars. Their formula has found success into the festival’s eighth edition. Maharaja Gaj Singh II of Jodhpur-Marwar, one of the RIFF patrons along with rockstar Mick Jagger, welcomed festival attendees this year with a statement that ended: “Roots, folk and world music are becoming hip.” Even the former patrons have given their charges over to the world.

Concertgoers are a mix of laypeople and devoted fans who attend the festival’s Living Legends sessions at sunset and stay up all night till sunrise to hear these indigenous musicians in prime slots. Even late at night, when the more contemporary music is usually played, you will find Darra Khan Manganiyar and Kachara Khan Manganiyar singing the exquisite compositions of poets like Bulleh Shah in a trendy-sounding session called ‘Desert Lounge’.

Some are wary of easy packaging, others acknowledge it as part of the show. “I think there are a lot of different things happening now. Kutle Khan has gone all sexy and MTV-ish, Abel is still putting musicians in boxes, Kheta Khan and the Hamira Manganiyars are presenting themselves in huge orchestras, beautifully dressed and musically coordinated, and some Manganiyars are still struggling away playing away on the floor of roadside hotels,” says Pope, calling their performances ‘Mozart moments’. “I just tell people they are about to see the most amazing musicians alive on the planet.” She describes a collaboration she worked on last year with the Manganiyar musician Lakha Khan, French cellist Vincent Ségal and a group of Hamira Manganiyars: “World-famous Vincent was standing ready with his electric cello, and Lakha began to demonstrate a raag on the sarangi. Vincent didn’t play a note until Lakha had finished. He was spellbound, but of course Lakha was totally unfazed by all our admiration. He’d played more international venues than I’ve had hot dinners. It took much longer for Vincent to elicit a (deserved) ‘wah’ of approval from Lakha!” The incorporation of indigenous music into mainstream commercial music is usually fortuitous and also inevitable, for physical survival. “Now we can eat, survive, which is what we struggled to do,” says Kheta. “Our children have a future. We would not have been able to keep playing or living like this.”

At first glance, the classic simple folk musician Kheta is deceptively canny about the business. Well-travelled and knowledgeable about music, he breaks into French and discusses parallels between Rajasthani gypsy music and Spanish flamenco. What did he make of The Manganiyar Seduction, wherein 43 musicians perform individually in a grid of cubicles, curtained and lighting up as the corresponding musician plays—likened to ‘the visual seduction of Amsterdam’s Red Light District’ (the University of Michigan) and ‘a gospel Mass or a slow-building rave’ (the Irish Independent)? “It was something new. Everyone sees something differently,” says Kheta. “But there was no connection between the idea of us playing and the idea of a market in Amsterdam. We don’t have any idea about that, we are just performing our music.” (Abel had not responded at the time this article went to press.)

Now, the musicians take the next step every modern artist seems bound to take: self-directed self-promotion. Kheta plans a new cultural institution opposite Jaisalmer’s Sam, a music village where visitors will come to hear Manganiyars play—a living museum of sorts which will commemorate their talents. “I will call the programme ‘Manganiyar Traditional Music’ and people will come to us for concerts,” he says. “There are hundreds of musicians living there and we will play twice a week.” Remarkably, despite the necessity of patronage from various modern patrons, it looks like the packaging, this time round, will be the province of its subject. One point for agency over legacy, within the complicated power dynamics of global music.