The biggest bromance in contemporary literary history comes full circle at JLF, as VS Naipaul and Paul Theroux drive out together 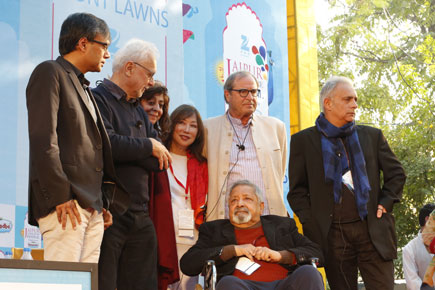 Has literary giant VS Naipaul actually made up with frenemy and former protégé Paul Theroux? The biggest question doing the circuit at the 2015 Zee Jaipur Literature Festival. The wives of the great writers stayed back when the two former foes, who have recently been drawing closer (the beginning of the thaw came after close to two decades with the famous handshake at the Hay festival in 2011; reportedly, Naipaul asked for Theroux to be invited this year, before their even more public reconciliation, reported below), went out alone to spend time with each other yesterday, close friends of the Naipauls told Open. Driven in a car, they rode out together like in the good old days; “Only the narrow roads forced them back to the hotel,” said a friend. “They couldn’t drive for as long as they had planned.”

On Wednesday, the Trinidad-born Nobel Laureate appeared on stage with writers Hanif Kureishi, Farrukh Dhondy, Amit Chaudhuri and, of course, Theroux. Listening to them talk about his A House for Mr Biswas, the Booker prize-winning author of more than 30 books was moved to tears. Theroux, full of praise, was eloquent on Naipaul’s beloved classic about a Trinidadian man who seeks success as a writer, A House for Mr Biswas. “What I was reading was a book which described an entire world,” he said. “A family on an island where nothing was left out, every cultural artefact, the food, the way of speaking, the weather and houses, everything was there. It was the most complete novel I had read since, I suppose, Dickens.”

“Thank you all very much. I want to thank the speakers, who have been very generous,” Naipaul managed, in what was clearly an emotional moment; he is reported to have said, “My life has come full circle”, later. By his side and finishing what he was saying for the audience, stood his feisty second wife of 18 years, former Pakistani journalist Nadira, wiping his eyes—and, for all practical purposes, the loudest voice 82-year-old Naipaul, now in a wheelchair, has today. Theroux has blamed Nadira for his rift with her husband—slighted by seeing his signed books sold at an auction, he was further put off by a in the past, but it appears she is at one with the current mood of reconciliation, calling him their friend and enabling their meeting.

When at last I met the big, bad godfather of Indian fiction—we were intended to meet several times, but this did not come about—we were unable to exchange more than a few words. For, JLF 2015’s biggest star, has, ironically, been its most absent one; once formidable, Naipaul has finally come to Jaipur at a time when he can’t and won’t speak much. We joined him after dinner at the Rambagh Palace where he sat with Nadira and a nephew; he shook my hand slowly, looking just like he did in portraits, only a tad less real. (Perhaps this is part of meeting every face we know already through over-exposure.)

As we awaited dessert, which he ate slowly, Nadira spoke of everything and everyone with a contagious energy, appearing to enjoy the festival and being back, at the centre of everything. Naipaul, who has a suite named after him at the ITC Maurya, is used to the highest honours and affections from the country he has loved to hate. This time, we were talking about him even while he was in the room, with us, and it seemed to be in the natural order of things. The great man was silent as we discussed how the world was reacting to him; he has already said the greatest things he has had to say.

Naipaul, anointed as Conrad’s heir by the Nobel Prize Committee in 2001, has been celebrated as being ‘grounded in the memory of what others have forgotten’. It looks like Sir Vidia, increasingly reticent and most comfortable with old friends, has decided this old friend and that old bond, is worth remembering. That a literature festival should effect this final step in a very public friendship, is only fitting.