From the colonial plantations of India to the ubiquitous pair of blue jeans, indigo has a fascinating story. And artists Laura Kina and Shelly Jyoti are telling it through their show. 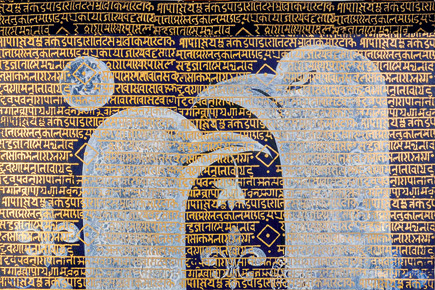 Indigo has a fascinating story. And artists Laura Kina and Shelly Jyoti are telling it through their show.


Q What’s the point of your show?

A Shelly Jyoti (SJ): I am exploring the presence of indigo through Indian history, narratives of immigration and transnational economic interchanges.

Laura Kina (LK): For me, the show was about starting a dialogue between two women of different cultures (and generations), Indian and American, around a common theme. Shelly Jyoti and I shared indigo as a point of departure. Our individual bodies of work, Indigo Narratives and Devon Avenue Sampler, reflect our distinct geographic locations – Gujarat and Chicago. While Shelly’s Indigo Narratives are inspired by the accounts of the tyranny of British colonial indigo planters on native farmers of Champaran and Mahatma Gandhi’s subsequent intervention in Bihar 1917-18, my Devon Avenue Sampler series is a contemporary portrait of the South Asian/Jewish neighborhood that I live in Chicago. It’s a diverse immigrant neighborhood where Jews, Hindus, Muslims and Christians all live side by side. I wanted to create works that reflect this polycultural society. I was curious to see how my pop-culture images, drawn from street signs and imagery from Devon, would translate back into an Indian context. The works have been hand crafted by artisans from Market Place: Handwork of India, a fair trade women’s organization.

My works also explore outsourcing and sampling. The use of the word sampler in the series title Devon Avenue Sampler thus refers to both embroidery samplers and sampling as in cultural appropriation or even in the way a DJ samples sound.  Outsourcing is a touchy subject both in the US and in India, although it is becoming less so in the US. I have chosen to employ artisans from MarketPlace: Handwork of India, “an innovative fair trade, not-for-profit organisation increasing economic opportunities for low-income women in India and empowering them to bring about changes in their lives, their families and communities”.

Outsourcing, which in the US typically connotes employing cheap labour from a Third-World country in order to save both time and money for a capitalist agenda has now been turned on its head. How can I, as an artist working in the US, make a responsible difference to improve other women’s lives? My artwork is just one small part of this larger agenda. My hope is that viewers can make a connection between the contemporary fair trade movement and Mahatma Gandhi’s economic strategies in the Champaran movement.

Q Why indigo? What drew you to it?

A SJ: I work as an interdisplinary artist. Being a designer, indigo as a colour/dye has been very fascinating. Secondly and most importantly, the champaran movement/Mahatma Gandhi’s first satyagrah in India is an important landmark in Indian history.

To me, textiles created for artwork are a great visual medium for documentation. My work challenges me to apply this vision of traditional block patterns and color in the context of socially and environmentally responsible design practices.

LK: Shelly and I met in 2008 through a mutual friend Shelly Bahl, a New York/Canadian artist. I went to see Shelly Jyoti’s solo show, Beyond Mathila: Exploring the Decorative, at Women Made Gallery and she came to hear a lecture I was delivering at Northwestern University on my recent Aloha Dreams show (Diana Lowenstein Fine Arts, Miami, FL 2007). We both saw a connection in our mutual interest in textiles.

Aloha Dreams was about Hawai’i and my own family’s history as sugar cane plantation workers. I had made a painting of a woman wearing an indigo kasuri fabric shirt. This is a very typical fabric for kimonos in Okinawa. My family is of Okinawan descent. (Okinawa is now owned by Japan). Shelly immediately noticed that the fabric was actually Indian. I thought this was interesting that something that I so closely associated with my own cultural heritage actually came from India. So this led us to talk about kasuri/ikat at first and then this developed into a discussion of indigo.

What was of further interest to me regarding the color blue and indigo specifically, is that it is also a color associated with Judaism. I converted to Judaism (my husband is Jewish) and we live in a Jewish neighborhood. I wanted to capture this aspect in my work as well.

Q Laura, you talk about your ancestors working in sugarcane plantations. What plantations were these?

Q Tell us about the use of indigo in Japanese culture.

A Japan’s blue-and-white cotton textiles are associated with its traditional, rural culture yet the hand-loomed, hand-dyed indigo cloth was first used by Japanese city dwellers in the mid-18th century. The widespread use of indigo  cotton by farmers came later, taking hold around the early- to mid-19th century.

Q Shelly, you worked with Azrak artisans from Gujarat. What was that like?

A ‘Azrak’ is a derivative of the Arabic word for blue. They use a technique called resist printing, using gathered and cultivated plants as dyes and transferring their colour to cloth with traditional dyeing techniques honed over centuries. This technique varies from context to context, so the one in India is different than what began in the Sindh area of Punjab. The use of azrak printing on khadi in my work looks at immigrants and the indigo technique that came along with them.

Q You have worked with the Azrak artisans in Bhuj and women from Mumbai. Does this kind of division of labour in art make you uneasy? Does it make you feel divorced from the process of creation?

A SJ: Art is process of creation and in this creation, we, as responsible artists, can support artisans and give them a new direction by giving them better means of livelihood and a global look and acceptance to their work.

LK: There is a very long history in contemporary art of using outside labour to make your work (think of Warhol’s Factory or contemporary artists like Kehinde Wiley who hire studio assistants to paint his paintings). Going back further in history, you see in the Renaissance artists working for workshops to produce work for a master artist. What was important to me was that the labour of the artisans at MarketPlace: Handwork of India was fair trade. This is part of the concept.

My choice to work with fair trade artisans meant that most of my labour time was spent writing grants to generate the money which I could then turn around to use to pay them fair wages. It was a political statement about labour.

There is no point in trying to say that our labour is equal though. I’m in a privileged position as an art professor in the United States. I may take for granted that I have relatively easy access to funding to produce my work and space in which to create it. Working with artisans from economically-challenged positions in India simply meant that I had to be considerate of the methods of how we were going to communicate. Would they easily have access to e-mail, printers etc?

But I did not feel “divorced or alienated from the process of creation” at all. There is one work, Devon Avenue Sampler, that I created by myself… I sewed the background quilt and hand-painted the imagery in white paint.

Indigo: New Works by Shelly Jyoti and Laura Kina will show at the Open Palm Court Gallery in India Habitat Centre, New Delhi, from 23–28 December and at the Nehru Art Centre in Mumbai from 12–18 January 2010.