And Roles for All

Inviting the audience to perform, a Bengal theatre group has galvanised activism in Indian villages. And engineered the scrapping of a Reliance SEZ in Maharashtra 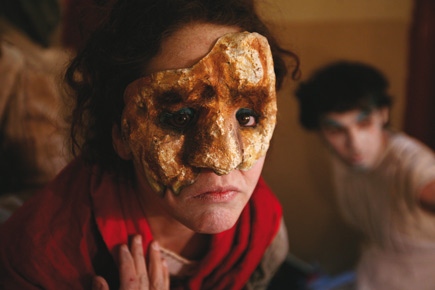 Inviting the audience to perform, a Bengal theatre group has galvanised activism in Indian villages. And engineered the scrapping of a Reliance SEZ in Maharashtra


These plays don’t have a script. The audience is part of the cast. And performances are about finding wholesome, lasting and consensual solutions to problems of the day. This is what ‘theatre of the oppressed’, of which the Bengal theatre group Jana Sanskriti is the leading exponent in the world today, is about. This form of theatre, conceived by Brazilian theatre-director, writer and politician Augusto Boal in the mid-1970s, seeks to transform ‘spectators’ (Boal’s coinage) into active participants in the theatrical experience.

But Jana Sanskriti is much more than just your ticket to meaningful entertainment; this theatre group has successfully taken on the mighty Reliance group and succeeded in getting their prized SEZ project in Raigad district of Maharashtra scrapped. “We staged such performances repeatedly in scores of villages across the district, and could thus build up a people’s movement against the SEZ project,” says Ulka Mahajan, a member of the group.

THE LEGACY OF AUGUSTO BOAL

The technique, based on the ‘pedagogy of the oppressed’, was introduced by Boal when he was exiled to Argentina by the then military regime in Brazil. It gradually grew into a major movement across South America, travelling even to parts of Europe, before it was brought to India by Jana Sanskriti in the early 1990s. Today, the troupe and its founder-director Sanjoy Ganguly can claim to be among the prime inheritors of Boal’s legacy, zealously taking this form of theatre, which is also called ‘forum theatre’, to other parts of the world.

A ringside view of this form of theatre makes for a fascinating experience. Jana Sanskriti recently organised a theatre festival in Kolkata that saw
participation from 23 countries and Jana Sanskriti’s own affiliate teams from across this country. Plays took up a variety of issues, ranging from land acquisition for industrial projects in Maharashtra to human rights violations in Iran and women’s empowerment in Latin America.

Here’s how it works. In a production based on the land acquisition issue, a few actors from Maharashtrian group  Sarvahara Jan Andolan go on stage as government officials working to acquire farmland for an industrial project. Another couple of actors essay farmers whose land is sought. An argument breaks out between the two groups, and an arbitrator—‘joker’ in forum theatre parlance—invites spectators to come on stage. A few do, and the debate intensifies with issues like compensation, rehabilitation and related concerns cropping up. Ultimately, the farmers reject the compensation as too meagre and ask the ‘authorities’ to come up with a better offer.  “The whole idea is to throw open an important issue to the people and get them to debate its pros and cons. By participating in the play, spectators appreciate all aspects of the particular issue. It is self-empowerment of sorts,” says Mahajan.

There’s a crucial difference between this and other traditional forms of theatre that focus on similar issues. “Other forms of theatre that deal with social and political issues aim at creating awareness. I strongly object to this creating or spreading ‘awareness’ since it presumes that I am superior. Actual awareness is self-realisation, which arises out of the internal conflict experienced by the audience in our theatre between the information that they have and the information they receive from the stage,” Sanjoy Ganguly tells Open. “When a man who beats up his wife at home watches an actor performing the same on stage, he realises the brutality he subjects his wife to, as well as the realities of the present patriarchal form of society that drive him to this brutality. He is then a ‘spectator’ of his own actions.” The main aim, Ganguly explains, is to “help every individual be a spectator to his reality”. When one sees his own reality, when every play is a link between him and his reality, the roles of the oppressor and the oppressed within that person become identifiable, and this knowledge helps the person deal with the oppressor within himself, says Ganguly.

The effectiveness of ‘forum theatre’ lies in the practice of staging a play on an issue repeatedly in the same village or area. Ganguly explains: “Take illicit liquor, which is a major issue in rural areas. The first time a play on this subject is staged in a village and the negative effects of illicit liquor on their health, economy and social harmony get highlighted, villagers ask for immediate and drastic action—like demolishing liquor dens and punishing those who brew the killer liquor. The first time this play is staged, most villagers avoid coming up. The second time, however, more villagers agree to come up on stage. Their suggestion is usually to involve the local panchayat to tackle the issue. The third time, they talk about rehabilitating those involved in brewing and selling liquor, and about counselling and treatment for addicts. This is the stage when people who face such problems in their daily life display mature, reasonable and effective reactions, and the actions that emanate are similarly balanced, viable and harmonious.”

Ganguly, 51, was an active member of the CPM’s student wing, the SFI, during his college and university days. Ironically, his brush with Marxism is what led him to break away from the party and what he terms “communism’s cultural monologue”. Says he, “I started feeling oppressed and suffocated in the party. There was total lack of inner-party democracy and I wanted to do something really meaningful for the poor and oppressed.”

By then, he had completed his Masters in political science and got a job with a private firm in Kolkata. Ganguly started working among slum dwellers in south Kolkata who were facing eviction. “Most of the people in that slum were from Dahakanda in the Sunderbans, and they suggested that I go to their village if I really wanted to do something for them. I started going to Dahakanda periodically, and over time, my visits got longer. I ultimately made that village my home. I had a few friends with me, and together we realised that theatre could be a powerful weapon to transform society and humanise the prevailing oppressive order. We started with the traditional form of theatre and faced a lot of opposition from the established order. Jana Sanskriti was formed in 1985 with 18 of us—all are still part of the group—and out first play was an episodic one called Gayer Panchali. I had by then been introduced to Bengali folk theatre, and marvelled at the democratic relationship between actors and spectators in folk theatre. I realised that the prevailing political culture doesn’t recognise the intellect of common people. In 1991, I met Boal and that changed my perspective of theatre. Jana Sanskriti then moved away from the propaganda form to the interactive form of theatre, which includes spectators in debates and discussions,” says Ganguly. This involvement of ‘spectators’ sparks an internal revolution—by which, Ganguly clarifies, he means transformation. The action on stage by ‘spectators’ drives them to being activists off-stage, and they, in Ganguly’s long experience, become role models for their fellow villagers.

Jana Sanskriti, which celebrated its 25th year recently, now has 25 satellite groups in West Bengal and affiliates in ten states of the country. It is also aligned with Medha Patkar’s National Alliance of Peoples’ Movements, and Patkar is keen on using this form of theatre to build opposition to big dams and other environmental threats.

“Our actors are all village folk who pursue other vocations. No one gets paid and everyone performs only twice a month,” says Ganguly.

But the road has not always been a smooth one—the principal opposition, ironically, came from the CPM. “We have been attacked a few times by CPM cadres and many hurdles were put up by the party. But we have mostly prevailed, and the reason is solely the participative form of theatre that we use to build a movement on an issue,” he adds. Jana Sanskriti has a ‘Spectators’ Forum’ with more than 10,000 members and an affiliate human rights body (Manab Adhikar Suraksha Committee) with more than 40,000 members. Jana Sanskriti played a pivotal role in the formation of Federation of Theatre of the Oppressed, an umbrella body with 29 major activist movements across India as members, in 2006.

For the first 15 years, Ganguly and his team had to struggle a lot. “Funds were meagre and we managed somehow. Some friends used to help with donations,” recalls Ganguly. But as the reputation of the group spread beyond India, many institutions and groups from various parts of the world started inviting Ganguly and Jana Sanskriti to deliver lectures and conduct workshops on this form of theatre. “Such lectures and workshops are the major revenue earners for us now. In five years, we will be totally independent financially and won’t need donations and grants,” says Ganguly.

But with finances no longer a concern, he’s worried about the course of development that India is charting. “Development has already been defined unilaterally by the corporate sector and government, without any dialogue with the people. This is  polluting India’s democracy. There is no difference between what I saw in the Soviet Union earlier, where development was imposed on people, and what is happening in India now. The definition and contours of development have to be discussed and debated very democratically. But since that is not happening, revolts and resistance have become commonplace,” he says. And that, he feels, makes ‘theatre of the oppressed’ ever more relevant by the day.