An exhibition built around words, their trickery and playfulness, their horrifying power to harm and maim, and their magical ability to conjure imaginative worlds 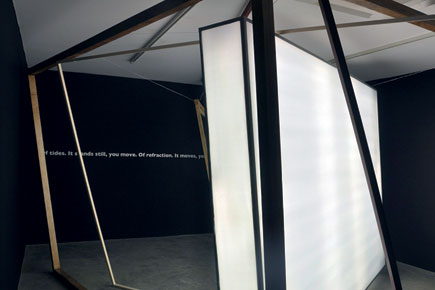 An exhibition built around words, their trickery and playfulness, their horrifying power to harm and maim, and their magical ability to conjure imaginative worlds


Imagine you’re playing Hangman, a simple game where one person thinks of a word and another tries to guess it by suggesting letters. What would be your first guess? Probably ‘e’. After all, it’s the most common (or highest-frequency) letter of the alphabet used in English as well as several other European languages including French. Consider Georges Perec’s achievement then in writing his novel La Disparition (A Void) as a lipogram without using the letter ‘e’. Yes, not even once.

Perec was part of the French Oulipo group, founded in 1960, which sought to create works using patterns and constrained writing techniques usually based on mathematical models, believing that they triggered ideas and inspiration. Perec’s best-known work Life: A User’s Manual, interwoven stories about characters living in a fictional Parisian apartment block, is written within a complex system of constraints—lists of items, objects and references that each chapter must allude to—and serves as inspiration for the title of an exhibition, Words: A User’s Manual, held in Delhi recently. What curator Himali Singh Soin is interested in is how Perec’s books “render you, the reader, the protagonist of these stories”, doing so through their inbuilt puzzles and clever clues. Hence, the exhibition is built around words—their trickery and playfulness, their horrifying power to harm and maim, their magical ability to conjure imaginative worlds—and includes works by contemporary artists Hanif Kureishi, Prayas Abhinav, Sachin George Sebastian, Sarnath Banerjee, Raqs Media Collective, Vibha Galhotra, and Zuleikha Chaudhari.

A poignant place to start is The Philosophy of the Namak Haraam, a large-scale photo print by Raqs Media Collective that shows an untidy, colourful row of hardback books. Their spines, facing the viewer, are empty and unnamed, subverting their very function of informing. The artist note speaks of namak-haraams, ‘defaulters to the debt of  purloined knowledge,’ the debts we owe all we read. If this is the library of the namak-haraam lined with books waiting to be filled, it is one of infinite possibilities. While the focus here is on the blank page, Sebastian’s work Multi-Story brims with the printed word. His installation comprises piles of newspapers compressed to resemble tall apartment blocks. The stacks are uncomfortably close together, some threatening to topple over, and an empty broken teacup on the table seems to signal a disaster that has emptied the city suddenly. There’s a sense of desolation amidst all the stories—both in print and surrounding the inhabitants of the ‘apartments’.

Chaudhari also plays with spatial dislocation but on a larger scale—her work Re Locate is a ‘metal frame containing space, or space containing a metal frame’ (depending on how you look at it). It plays with lines and splices the room into angles much like American artist Fred Sandback’s minimalist yarn sculptures. It has instruction-like sentences printed on the wall and an installation that also reads the same aloud.

On a more playful note is Abhinav’s video game The Decay of Meaning, where the viewer is encouraged to participate by pressing a large red button to make the onscreen character (styled after old Mario game graphics) jump to swallow ‘good’ words. The object is to run faster than your evil doppelganger and avoid the ‘bad’ words. Except, it gets more complicated because the positive words often morph into negative ones. Meaning, the artist seems to say, is fluid, flexible and subjective.

Kureishi’s installation Flux also deals with constantly changing words. Four letters are hung on a wall and automatically flip to create new random combinations; each letter in turn is made up of four-letter words, multiplying the levels at which the installation works.

In Sarnath Banerjee’s I lost my wedding ring behind Harrod’s, text, submitted by people from across the world, is used to conjure images. The words and sketches form an index of lost spaces, memories, personal items: Erin Schreiner, a librarian of rare books, writes of lost stories; Prashant Keshavmurthy, a professor of literature, of his lost head; Julia Beth Hurvich, a musician, of New York. Banerjee’s sketches, picking at the spaces between the words, are in turn poignant, clever and amusing.

In striking colourful opposition is Galhotra’s metallic red line of Hindi words ‘Asuvidha Ke Liye Khed Hai’ (Inconvenience is Regretted)—a phrase that is used conveniently to conceal more than reveal any information. It hints at the power of words to manipulate, as politicians, the press, the Government and advertisements often do, and is hung on the wall more as a warning than an apology.

Soin’s own literary input takes the form of poetic, as opposed to formal informational, plaques beside each work; on the ceiling, mostly hidden from view, she has scribbled words that look from afar like a line of ants. While the principles of Perec and the Oulipo group aren’t really explored in much depth, this is still an important show for several reasons—it is unusual, absorbing and challenging. Words may be used in infinite complex contraptions, and still, as we see even in A Void, which is part of the display, hold us in thrall.