All These Paintings I Do for My Kids

MF Husain, on self-imposed exile in Dubai, is doing well, thank you. Yes, he is still painting, but you are not in the picture. The canvases are for him and his children 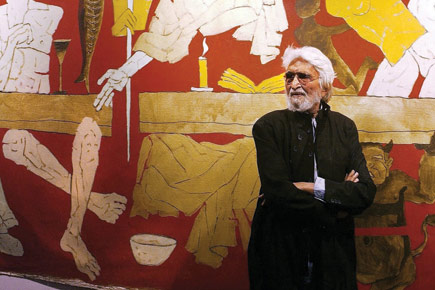 MF Husain, on self-imposed exile in Dubai, is still painting, but you are not in the picture

The artist, who divides time between London and Dubai, is in the midst of creating a swirl of canvases that he says are meant for three museums dedicated to, who else, MF Husain. The paintings are part of many projects commissioned by government schemes in the UAE and Qatar. He says they will be run by a private foundation manned by his children, and are not meant to be the property of any government.

Along with earlier works from his collection, the museums will hold new works-in-progress like a series on Arab history, and another on Hindi cinema, both of which are high-volume projects he plans to finish by next year. “I don’t do single canvases anymore,” says Husain. “I paint novels, a life-long commitment on a scale which only a museum can undertake.”

The so-called Husain museums have been planned for three cities: Abu Dhabi, Dubai and Doha. Husain went into permanent self-exile in Dubai in 2006 after a non-bailable arrest warrant was issued in a case against his Bharat Mata painting. Since then, he’s become a person of interest in the Gulf region’s growing arts and culture scene. There is a large clutch of serious buyers in the area, and a city like Abu Dhabi, for instance, is in the midst of remodelling itself from an oil bowl to the cultural centre of the region. Chasing that dream, the city has poured millions of dollars into buying art and building museums, including a version of the Louvre and the Guggenheim. Thanks to Husain’s productivity and his newfound benefactors, these ongoing projects are estimated to have thousands of his works, all of which he says are entrusted to his family. “I don’t need to give anything to the public anymore. There are thousands of my works in circulation, that is enough for now.”

And he’s right on the money. Though the artist hasn’t sold works through a gallery in almost a decade, there are so many Husain paintings in circulation that there’s nary a Modern auction without the tried-and-tested Master. At the latest Sotheby’s Indian auction in London, older canvases from the 1960s and 1970s sold for five times their estimated value. Husain is at the head of the charge of Modernists whose prices have beaten the recessionary art slump. But critics point out that the demand is only for his pre-Gulf, even pre-1980s works. Perhaps there wouldn’t be as much interest in his millennial horses and Arabesques even if they weren’t interred in a museum somewhere. Anyway, he says, he doesn’t care. “God gave me good health and a long life, and I’m creating…”