The man who doesn’t have a sofa in his home is still coming to terms with becoming a big-time director after Dabangg. 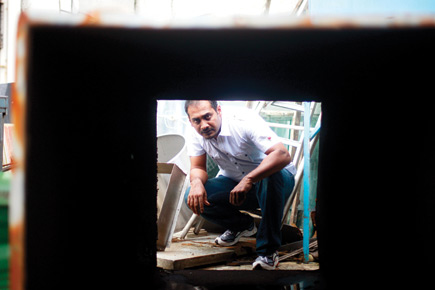 The man who doesn’t have a sofa in his home is still coming to terms with becoming a big-time director after Dabangg.


On the weekend that sees two festivals in Mumbai—Eid and Ganesh Chaturthi—Chandan cinema, a downmarket single-screen theatre in Juhu, is running houseful. It’s Dabangg’s opening weekend. While an upper stall ticket costing60 is selling in black for200, balcony tickets are available over the counter hours before the show. The stalls are where all the action is. People are dressed in their Eid best; young men in kurtas with gold and silver embroidery, as colourful as the ladies. The crowd is hooting and jeering even before the film has begun. When the Ganesh logo of Ashtavinayak Films flashes on screen, the audience erupts in a collective “Ganpati Bappa Morya”. Above, in the balcony seats, families are comparatively sober. But here too, whistles erupt intermittently. The maximum seetis are not for the best dialogues, not for the action sequences, and not even for the item number. They are when Salman does nothing—when he strides into the frame in the tightest cop uniform seen on celluloid, or when he gets up from his cot in a vest. It doesn’t matter that Salman in a lungi walks like David Hasselhorf in Baywatch. His audience loves him. When he jumps into a song to join Malaika Arora in her gyrations, they go crazy. Abhinav Sinha Kashyap did 13–14 revisions of the script of Dabangg. Sitting in Chandan Cinema, the natural question is: why did he bother? A crowd like this would have swallowed anything with Salman Khan.

Abhinav was to see the first film he directed at Chandan cinema. He was planning to do a “random survey” of how the movie has gone down with the audience by the number of seetis filling the hall. “It has a good mix of viewers. The balcony has the corporate Gujjus and Juhu crowd. Stalls have the rickshaw wallahs.” But he didn’t go. Instead, once the movie released, he preferred to spend time with his father who’d come visiting from Banaras. The father is a proud man today. It has only been a couple of years since his other son Anurag Kashyap, after an almost unbelievable run of bad luck, finally made a name for himself as a director, and that too making the kind of movies he wanted (which in Bollywood is almost a death wish). And now Abhinav, who has been in the industry for over a decade, has hit big time. “I have bought three new sets of clothes, nice shirts. I know I’m supposed to look good and happy and everything,” he says.

At the time of this interview, which took place a day before the film’s release, he was juggling half a dozen phone interviews and an online live webchat session. Fame has finally come home, but it sits uneasy. “If you don’t recognise me on the streets,” he says, “I will not help you recognise me.”

His barber and panwallah still think he works in the Railways—an impression he’s deliberately cultivated because a government job is the most boring one can have, and the persona helps him get neighbourhood gossip and story ideas. “I hardly have any hair. I enjoy my barber’s company, which is why I go there. He tells me who’s getting drunk, who’s wife is sleeping with whom, who’s beating whom, and I get a lot of voyeuristic pleasure.”

Abhinav doesn’t invite anyone to his home because he doesn’t have a sofa for guests to sit on. That space is kept empty for his children to play. His elder daughter, who is ten years old, is as unsure about his new-found status as he is. “Earlier, my daughter, who plays with my brother Anurag’s and [director] Imtiaz Ali’s daughters, would ask me ‘Why isn’t your picture in the papers?’ Now that my picture is in the papers, she hasn’t told anyone I am the director of Dabangg. She thinks they will look at her differently.”

One of the reasons why he was so happy shooting Dabangg was he could still find time for his wife and children—he had been virtually ordered by Salman Khan to not work too much. The star had made it clear that he was coming to the sets to enjoy himself, and so “don’t make it a punishment”. What he meant was: don’t shoot for more than eight hours a day. Now that the movie is over, Abhinav is figuring out how to deal with dumb questions. “When people ask me how the idea of Dabangg, of Robinhood Pandey came to me, I keep the answer constant. I was walking on the road and God dropped it on my head. How do you answer such things?”

With a dumb, clichéd answer, of course. All the famous people of Bollywood know that, but Abhinav Kashyap is still to get the hang of it.