A Day with Imran Khan

And all that it reveals of the man behind the star 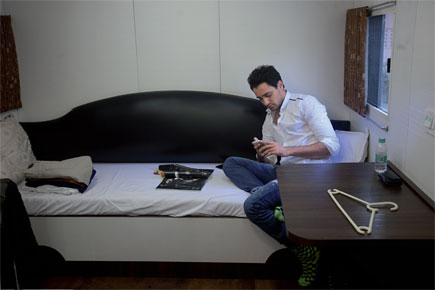 And all that it reveals of the man behind the star


The phone rings and it is Imran Khan on the line. He’s just calling to ask when I’d prefer to shadow him for an entire day—a day full of TV interviews or one with a cover shoot for a film glossy. This is not normal. Usually, a request to interview a star is mediated by an all-mighty public relations professional who will offer 20 minutes and expect the story on the cover. I pick the first day on offer. It turns out to be the cover shoot.

We meet two days after the phone call. I sit in his newly-renovated home in Mumbai’s Pali Hill area. It has an indoor pool. As I play with his Labrador Emma, eyeing the pool and cursing my menial job and modest pay packet, Imran Khan walks in dot on time and says ‘Hi’. He looks taller in real life, much younger, and definitely better looking. He’s clean cut, with light eyes and a complexion a girl would kill for. As I hand him a copy of Open, he quips, “I have read you guys online. You never say good things about me.”

I flash him my best smile. “Really… wonder who…?”

He grins. “I get weekly reports on what is written about me, but that’s cool.”

We get into his Porsche Cayenne, and even though he sits in the front seat, each time he answers my questions, he turns and looks me in the eye. Now and then he picks up the phone and you know it’s his wife Avantika calling when he says, “Hi baby.” They have a housewarming party planned two days later, so it seems a busy time. He also has promotions lined up of his latest movie, Vishal Bhardwaj’s Matru ki Bijlee ka Mandola, in which he plays a Jat boy opposite Anushka Sharma. And then there’s the schedule for Once Upon A Time in Mumbai Again, in which he plays a gangster.

“I like things ‘just so’. Every estimate everyone gives you is wrong. ‘Sir, aaj shaam tak ho jayega’, and two days later, it’s not done. I want things done exactly on time and exactly the way I want it,” he says as the SUV weaves its way through traffic. Now and then, it stops at a signal— to cries of recognition (“Oh, it’s Imran in the car”). Kids crowd around. He smiles, waves and we’re off again.

Imran Khan is excited about Matru… and as he talks about the movie, his knowledge of cinema as a craft is a bit surprising. “When you shoot a scene, there are two people talking across a table. I have my mark, the others, their mark. There’s a camera behind them, one behind me. To shoot a scene, you need the basic five angles. That’s what I am used to. But Vishal will say ‘How do you want to shoot the scene?’ And he’ll never give you a mark. It’s all very dicey. If I turn here, my face could be in shadow. Or I would be out of focus. But he would say, ‘Go and do what you want to do, and I will make sure I capture it.’ It’s scary, and it forces you to get your stuff together. If I said I needed to think, he would say, ‘No, do something, I trust you.’ What does that even mean? How can he trust me when I bungled the last two tries? But it happened a third time. I have never come out of a film feeling so confident.”

Imran Khan is a thinking actor of the method school of acting. Danish Aslam, who worked with him on Break Ke Baad, first met him at a party where they spent the whole evening discussing

Aaron Sorkin. “As an actor, he likes to prepare and needs to know why he is doing what he is doing. He likes to rehearse and his best take comes after a few tries.”

In selecting a movie, he says, he takes three criteria into account—the script, the director and the producer. He reads at least four or five scripts a month. “I actually get scripts written in crayon.

Actually, everyone has a script. Who can tell someone ‘You should not be writing a script’? Everyone has that one original idea.” When not reading scripts, he reads books that teach him “how things work”. He also likes mystery books, and we soon find ourselves talking about Agatha Christie and Hercule Poirot. “Christie had a unique way of writing,” he says, “In the beginning, words and sentences are longer. But as you get to the end, the sentences start getting shorter, in staccato form. So the pace gets faster. That’s why it’s a page turner.”

There is classic rock playing in the Cayenne and that’s because he has strong musical preferences. “I can’t stand hip- hop. Hip-hop is just so shallow.”

I object and say some people consider hip-hop artistes poets. “No, that’s rap,” he says, “Hip-hop has no value.”

“But what about musical value?” I ask.

We are almost at the Versova venue of the photo shoot. A light lunch of salad and a chicken burger is ordered from a nearby restaurant. There is pizza too. We enter Imran Khan’s vanity van and it’s straight to work getting his make-up done. He is surrounded by friends who work with him. His hairstylist Ayesha DeVitre is there and so is his stylist Neha Bhatnagar, with plenty of banter in the air. Ayesha says, “That pool you saw? Imran rarely ever sits in it. He’s the good boy running around asking people ‘Do you need anything?’”

The actor strips down to his underwear to change into his outfit and I turn around. He chats over his burger 10 minutes later, apparently unaware of my reaction. He has just rejected the salad because it had onions and feta. He talks about his favourite food. “Pizza. It has to be pizza. I once ate a slice in New York from a small little hole in the wall, and once I finished, I was like ‘I am never going to like anything else now’.”

In the studio, I hear hip-hop playing and wonder how Imran will react. He walks in and strikes a pose as soon as the camera gets going. He has leggy Anushka by his side, and they need to look romantic. He looks into her eyes and smiles, and then moves her hair off her neck and places his lips there. It all looks rather intimate… till they crack up and he makes a funny face. But, two seconds later, it’s back to the same intensity.

“I don’t even notice these things anymore. The intimacy just happens—it’s work after all,” he says later as he changes into another outfit. Almost two hours and a few shots later, we are done. Imran Khan is walking off the set when a fan comes and says ‘Hi’. He smiles and asks, “Did you like the last shot? I think we nailed it.” She looks astonished at being asked for her opinion—and blushes.

In the SUV, now stuck in traffic at Juhu Circle, I ask him, “So the way you were with that girl—making conversation— are you really like that?”

“No,” he admits, “I have worked on that. It’s part of the persona. You will see me in the middle of a huge crowd and wonder, ‘Why is he even there?’ But even though I may not care about what you think, I want to know at least. I need to know how people think. Most people don’t even want to know. I want to know people—it’s an anthropological thing.”

Wasim Khan, his executive producer and a friend who has known him for 16 odd years, says he is called ‘Imikipedia’ in their circle. He just knows so much. “Just message him anything that has you stuck,” says Wasim, “and he’ll tell you what it means.” As a friend, Wasim swears by him. “I was in trouble once and didn’t even know of the trouble’s existence,” he says, “I got to know later that Imran [knew of it] and had sorted everything out through his wife Avantika [Malik].”

I ask Imran Khan something I have often wondered about. Do actors ever make friends once they become stars? “No, I have no new friends,” he says. “It’s hard. That’s because no one ever says anything bad to me. No one will ever question me. No one will say, ‘Imran, that’s wrong.’ Only my old friends say that. I mean, every hairstylist who has ever touched my hair has said, ‘You have the best hair.’ And I’m like, ‘Really?’”

Since he’s being so honest, I take the chance to ask him a question I am pretty sure he won’t answer. “Is young Bollywood doing drugs?” He laughs. “Isn’t everyone doing drugs? Everyone is living that life, so why only Bollywood? I myself keep away, though.”

Imran Khan shut down his Twitter account a few years ago despite having a huge following. He is glad he did. “Some idiot out there would think he could say anything to me. Why should I give him that access? I don’t care if you don’t like me. Keep your opinions to yourself.”

I ask him about his fascination with comics and movie trivia. He loves this topic. “When Batman Rises came out, I was watching it from a very different perspective. It’s a mix of so many comics. And I knew each one. I was invested in the Nolan Batman series. I prayed hard that the director would be Christopher Nolan, and that came true. I prayed again that Christian Bale was chosen, and that happened. It was great.”

As we near his home, he gets quieter. He answers a question on his marriage with a matter-of-fact air. “I have been with Avantika now for ten years,” he says, “Nothing has changed. It’s all good.”

We reach his residence. Even though he invites me in, I decide it’s time to leave. I thank him and express surprise over the time he has spared.

He grins. “I wanted people to know me,” he says, “And I thought if I needed to do that, you needed to spend some time with me. I am a hard one to like. I need to grow on you.”