A Bid For History 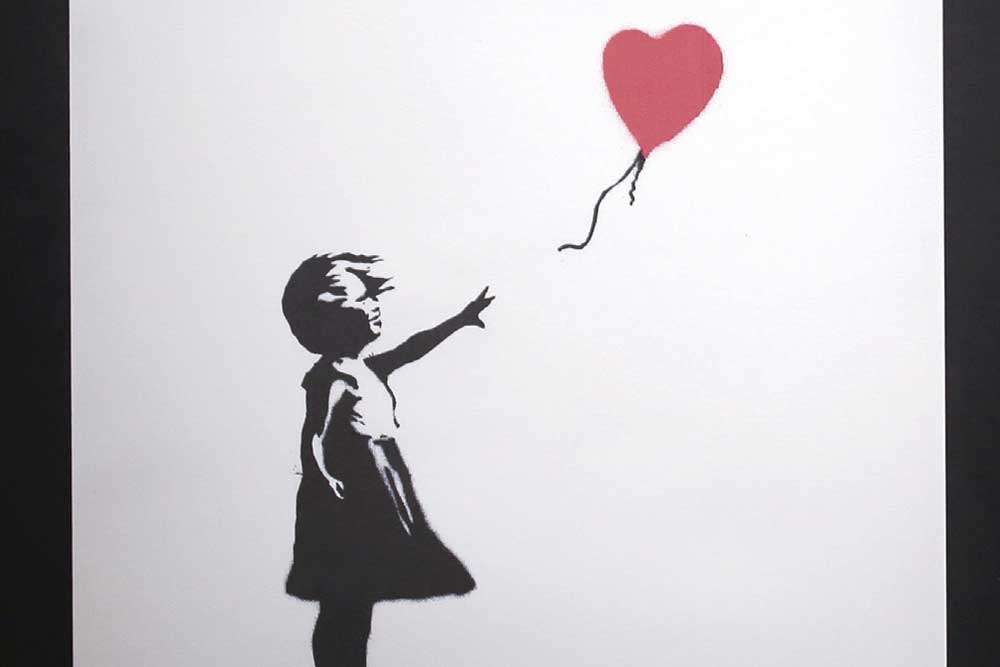 ‘GOING, GOING, gone…’ Banksy, the notorious, anonymous, anti-establishment street artist, thus audaciously captioned his Instagram post on October 6th, 2018. The accompanying photograph captured an iconic moment. It was art history in the making. The object in the spotlight— lot 67—was a print of his stencilled work, Girl with Balloon, originally a 2002 mural by Banksy on Waterloo Bridge in South Bank, showing a young girl letting go of a red heart- shaped balloon. The content was re-appropriated by the artist in 2014 in his campaign supporting Syrian refuges, with another variant used later in 2017 by him as a controversial reward in the form of free prints to voters in the 2017 UK general election to gain momentum against the Conservative party. In 2017, the work had ranked as the UK’s number one favourite artwork by a Samsung poll.

This was not Girl with Balloon’s first foray at an auction. In November 2015, a print of the painting was auctioned for £56,250, more than twice its estimated value. However, this recent Sotheby’s auction marked a coup. The artist, who chose to use a heavily gilded Victorian-style frame around the print, had inserted within it a shredder. The instant the auctioneer’s gavel went down on the final amount of $1.4 million, more than half the print slipped through an opening at the bottom of frame and was sliced with precision to the accompanying sound of beeping, the kind you hear in some museums when you venture too close to a painting. A follow-up post by Banksy on his Instagram account offered proof of the hidden device. ‘The urge to destroy is also a creative urge,’ read his caption, a quote he attributes to Picasso, but is in fact credited to Mikhail Bakunin. ‘A few years ago I secretly built a shredder into a painting,’ reads the text at the beginning of the video. ‘In case it was ever put up for auction,’ it continues after footage of a hooded figure assembling the contraption, followed by a replay of what transpired at the auction; the painting self-destructing almost instantly after it was sold.

It’s not every day that we get to witness an artist delighting in the destruction of his or her artwork, especially within the context of an international auction, the secondary market staple known for having marginal to zero profit margins for the artists who produced the work being sold. Auctions are known for primarily rewarding collectors or buyers who had the prescience to purchase work when its price was low, or when an artist was relatively unknown. The buyer’s premium that triples in value if a work has appreciated over time is like a bonus a collector is perceived to have rightfully deserved for holding out for as long as she or he did. The bottomline that gets reinforced is always the same: art is indeed an investment, and sometimes the pay-offs are extreme. Banksy’s prank demanded that the secondary market ask itself some difficult questions. Can an artist still exercise agency over an artwork once it has been sold? How is value approximated? How do you arrive at an assessment? What happens if the nature of the artwork alters within seconds after it has changed hands? Does the new owner see the destroyed artwork as an asset or an unforeseen liability?

Sotheby’s, like most successful auction houses, cleverly construed the event as a precedent. ‘It appears we just got Banksy-ed,’ Alex Branczik, Sotheby’s senior director of contemporary art said in the news release. He added the auction house ‘was pleased to confirm the sale of the artist’s newly-titled Love Is in the Bin, the first artwork in history to have been created live during an auction.’ Was Sotheby’s in on the prank all along? A company spokesperson said it had received express instructions from the artist’s studio against removing the work from its frame during the cataloguing process; “We were told that the frame, which was glued, was integral to the work; breaking it would damage the work, and negatively impact its artistic value.” A spokesperson for Banksy similarly denied rumours of collusion; “The painting had 27 confirmed bidders on the night. A reputable auction house would never encourage their valued clients to bid on something they knew would be destroyed, their credibility would never recover.” Sotheby’s head of contemporary art said: “I took it for what it was, a coup on the art world.”

The speculation as to whether the anonymous female European collector who had made the winning bid would still continue with the purchase was put to rest when she categorically defended her claim to it: “At first I was shocked, but I realised I would end up with my own piece of art history.”

Pest Control, a firm acting on Banksy’s behalf, fittingly titled the new piece, Love Is in the Bin. The question then remains that for a guerrilla street artist like Banksy, whose previous pranks have targeted the Louvre, Tate Britain, British Museum, the Museum of Modern Art, the Metropolitan Museum of Art and the Natural History Museum, was this a coup or a sell out? Or was it, as some have insightfully pointed out, evidence of performance art? If art is in the intention and if the intention was to shock and scandalise, Banksy was successful on every front. If the intention was to provoke a larger debate about how art is evaluated in the secondary market, once again a box can be said to have been ticked off. If the intention was to question an authorial agency in terms of material and medium once a work has been consigned to an auction house, Banksy managed that too. His prank was fool proof. It was designed by him to be. The only casualty at this point is one owner of a Banksy artwork, who rendered his $81,000 print worthless after he tried to shred it in what has been dubbed a ‘copycat attempt to double its value’. The owner contacted art experts with the hopes of selling the print of the very same work, Girl with Balloon.

For an artist who has made a career out of strategically making anti-establishment moves by fully exploiting all that his carefully preserved anonymity affords him, this recent manoeuvre is nothing short of brilliant. Admittedly, it is incapable of proposing or propagating any real change in how auction houses operate or make much of a dent in the ongoing debate about artist royalties for secondary market purchases. But for a brief moment, it tapped into what critic Elena Martinique terms ‘the economy of spectacle’ commanding the world’s attention while implicating the market’s complicity in furthering the cause of art as a consumerist activity that divorces it from the artist’s original intent.

Guardian art critic Jonathan Jones reminded readers of the artist’s inimitable sense of timing. ‘For Banksy put his artwork through the shredder at the climax of the busiest week in the London art market, when international collectors fly in for the Frieze art fair and its satellite parties, private views and purchases,’ he writes in his column. ‘What happened at Sotheby’s is Banksy’s greatest work,’ Jones asserts, ‘He has said something that needed to be said: art is being choked to death by money. The market turns imagination into an investment and protest into décor for some oligarch’s house. The only rebellion left is for works of art to destroy themselves the moment they are sold.’

While there are many artists who are quietly subverting the demands of the art market, like our very own Benitha Perciyal who makes sculptures with organic ingredients that are consciously biodegradable, thus resisting the temptation towards permanent value; or Rehaan Engineer, who will only let you buy his artwork if you pay him 30 per cent of whatever you earned the month before, Banksy’s stunt, because it was embedded in the chaos of spectacle, had a wider, more significant reach. It harks back to George Berkeley’s philosophical thought experiment: if a tree falls in a forest and no one is around to hear it, does it make a sound? Banksy waited for his work to arrive at the point of his thesis— ‘If it ever came up for auction’— and somehow, at precisely that instant, when all eyes were watching, triggered its self-destruction, compelling it to transcend its form, irrevocably altering its value. The balloon drifted further away and the girl’s form got mutilated. The gap between subject and object in his print was never this unbridgeable. Love is in the bin indeed. We would be remiss to think of this solely as an artwork. It was a self-fulfilling prophecy.