Raghavendra, Bhimsen Joshi’s eldest and neglected son, pens a tell-all book on his bitter-sweet relationship with his father 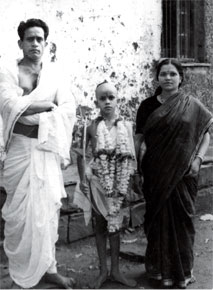 Raghavendra, Bhimsen Joshi’s eldest and neglected son, pens a tell-all book on his bitter-sweet relationship with his father

When Raghavendra Bhimsen Joshi sings, his face contorts into various grimaces. His eyes become wild, his hands sway and cut through the air, his sinews come alive, and his mouth twists. He does none of this in imitation, nor in an affected manner. And when he pauses briefly, he says, “For music, even your body has to become an instrument.” As he continues singing, my gaze climbs above him and over a crayon-scribbled wall, and rests on a framed photograph of a man singing. I cannot help but realise how closely Raghavendra while singing resembles the man in the photograph, his illustrious late father, Pandit Bhimsen Joshi.

To an untrained ear, Raghavendra’s voice appears rich and mellifluous. Yet, he was able to sing to his father on only two occasions, once when Bhimsen Joshi was bedridden after he had fractured a leg, and another time during his last dying days. Otherwise, such intimacy was never encouraged.

Raghavendra is Pandit Bhimsen Joshi’s eldest son, born of his first and neglected wife, Sunanda Hunagund. His mother bore three more children, Usha, Sumangala and Anand. When he was around five years old, Bhimsen Joshi got married a second time—to Vatsala Mudholkar, with whom he had three children. After a brief attempt to stay together, Bhimsen Joshi moved in with his second wife and family. “History is always written by conquerors,” Raghavendra says. “And in the war over our father, we lost.”

Now at 69, two years after the death of Bhimsen Joshi, Raghavendra is making a claim to his father and his memories of him. He has written a book detailing his relationship with his father. Titled Ganaaryache Por (Singer’s Son), it will first be published in Marathi and then translated into Kannada later this year. “Some people ask why I have written this tell-all book.” he says. “But this is not about speaking ill of my father. It is about providing a true and complete picture of him. About providing our story with him,” he says, ‘our’ being Sunanda and her children.

Raghavendra lives on the outskirts of Pune in a two-storey house with his wife, two sons and three grandchildren. After spending about 15 years working as a supervisor in a government arms factory, he set up a bore-well drilling company from which he retired a few years ago.

Raghavendra’s is a story about neglect and abandonment. After his father eloped with his second wife, whom he had met during a Kannada play, the two wives and their children tried living together. Arguments between the two wives would break out constantly, and according to Raghavendra, the second wife ill-treated them. He claims that within a few months, he and his mother were asked to leave and live separately. On his second wife’s insistence, Bhimsen Joshi provided them only a meagre allowance of about Rs 200 every month, and she let him visit them only occasionally.

“When people wrote articles or books on my father and his personal life, we would never be mentioned [even] in a single line. It was extremely hurtful. Here was this star, a public figure growing in stature, and here we were, neglected and alone,” Raghavendra says.

Many years later, when Gulzar’s documentary on Bhimsen Joshi was aired on Doordarshan, Raghavendra gathered his family to watch it. “It was supposed to be an intimate look at Pandit Bhimsen Joshi, but we were not [mentioned] even once. But what hurt the most was that one instance in the film when [my father] remarks how every time he travels, he now has to get something for his grandson,” Raghavendra says. Bhimsen Joshi was referring to the grandson at his home with his second wife, while Raghavendra himself had a son of similar age.

Raghavendra refers to his father as ‘Bhim-anna’, having picked up the name from the manner in which other musicians referred to him. When he was around six, he recalls watching a performance of his father at an open-air concert. There was a slight drizzle. He shut his eyes while his father sang, and for the first time, he felt as though he was walking with his father in a beautiful garden. “I realised what an incredible man he was,” he says, “And I wanted to be a singer just like him.” He would ask his father to train him, visit his father’s performances and practice on his own, imitating whatever riyaaz he had seen his father do, but he was never trained. A few years later, when his mother started living separately from her husband, she encouraged him to sing and got him a guru. However, the arrangement did not work out, and Raghavendra soon had to concentrate on his education so he could support the family. Later, when he started working, he tried to undergo vocal training again. But that did not work out either, as he found himself too tired after work to pursue music classes.

Unlike his siblings, Raghavendra was deeply influenced by his father’s music. He had, after all, spent plenty of time with his father before he moved away. Raghavendra would try to attend all his performances in Pune and nearby cities like Mumbai. On many occasions, his second wife and children would be invited on stage for photographs, while Raghavendra would look on from the front row. After performances, Raghavendra would walk home, while his father would drive on as though he hadn’t seen him. “But I don’t grudge him those moments. I understand he was under pressure,” he says.

However, despite objections, Bhimsen Joshi continued to visit his first wife and family. And in 1962, about a decade after he remarried, Sunanda gave birth to her youngest son, Anand Bhimsen Joshi.

Bhimsen Joshi was an incorrigible alcoholic, which Raghavendra blames on the pressures of having two families. Tales of his drunken antics include stumbling on stage sodden with alcohol. Once in the 1950s, he boarded a flight at Mumbai Airport drunk and took a seat reserved for Morarji Desai, Chief Minister of the then Bombay state. The city was under prohibition at the time. Desai took another seat instead. But during the flight, the CM realised that the singer was drunk and pointed out that liquor was not allowed in the city. “Prohibition is for the ground,” replied the singer, “Not the skies.”

Bhimsen Joshi’s biography, Bhimsen Joshi: A Passion for Music, tells of another hilarious account. In early 1976, when India was under the Emergency, Bhimsen Joshi was travelling to Delhi with a friend, TA Pai, a banker. Pai was expected to become the Union’s next Finance minister, but got the Commerce portfolio instead. Later, during a performance in the capital that Pai was attending, a drunken Bhimsen Joshi started delivering a speech on how Indira Gandhi was erring by not letting Pai run the Finance Ministry. Afraid of the consequences, Pai waded through the audience, landed on stage and tried to wrest the mike out of his hands, even as Bhimsen Joshi kept up his harangue.

Raghavendra laughs as he recalls these episodes. Some of his earliest memories are of sitting in the passenger seat of his father’s Fiat with his inebriated father—in undershorts, a vest and pair of Ray-Ban sunglasses—and the windows rolled down, driving from Pune to Kolkata to reach a venue for a performance. On one occasion, he visited his first family slightly drunk, and, Raghavendra recalls shyly, planted a kiss on his mother’s cheek in front of the children.

As the years went by, and as the guilt perhaps over neglecting his wife and children increased, Bhimsen Joshi started drinking more. Later, there were times when he would disappear for days at a stretch, with neither wife aware of his whereabouts. Vatsala, his second wife, would call Raghavendra on such occasions, asking him for help. As the eldest son, his father often listened to him. Bhimsen Joshi was once located in Mumbai after about two days of being missing, and since he was refusing to return home, Raghavendra along with a half brother were sent to fetch him. They all returned to Pune by air, also Raghavendra’s first ever flight. Bhimsen Joshi, with his late arrival and people’s requests for pictures, managed to delay the aircraft by about half an hour. When they reached Pune, the singer refused to go to either house. Instead, he took the two sons to a rich friend’s house for lunch and “a few light drinks”. Hearing his father’s stories, the host said, “What a rich life you lead, Panditji.” “This episode has always stuck with me.”

Raghavendra says, “Here was this rich man, with an elaborate feast and a number of servants, and he was calling my father rich.”

Despite being ignored so badly, Raghavendra would always seek out his father. He got his father to attend his wedding, his son’s naming ceremony (where Bhimsen Joshi showered flowers made of gold on the child), and when he bought his first vehicle, a Maruti car, he asked his father to take the first drive home from the showroom.

When Sunanda died, Bhimsen Joshi was in Mumbai for a performance. Raghavendra called him, but his father asked him to go ahead with the funeral as he would not be able to attend it. In a rare instance of losing his temper on his father, Raghavendra cut the line off, saying he did not expect any better. Bhimsen Joshi apologised later and made it to the funeral.

Raghavendra himself tried to be part of his father’s life, often going out of his way to do so. He was beside his ailing father when he was conferred the Bharat Ratna, despite not having been invited. He paid daily visits to his father when he was in hospital dying. When he died, it was a hospital doctor, and not any of his step-siblings, who informed Raghavendra.

A few years before his death, when Bhimsen Joshi was bedridden with a fractured leg, Raghavendra had asked him why he had neglected them. “You could so effortlessly move people to tears with your voice,” he asked, “How could you be so cruel to your own family?”

This was a rare instance, since he’d never questioned his father. His father began to cry then. Raghavendra’s biggest disappointment remains of not having followed his father’s footsteps and become a musician. He never had the courage to express this disappointment to his father, or even the gumption to ask him for his opinion on his talent. That evening, as he sat by his father’s bedside, his father moved to tears by his question, Raghavendra asked him one more thing. For the first time, he asked if he could sing to him. Bhimsen Joshi agreed and after listening to him, cried some more but did not say anything.

Raghavendra sang to him once more, a few years later, as his father lay on his deathbed, with no one but a nurse in attendance. This time, after the end of his song, when he opened his eyes to look at his father, Bhimsen Joshi had turned to the nurse. Too weak to speak, he was gesticulating to her with his eyebrows what a fine singer he was.