﻿﻿﻿Illness as a Metaphor 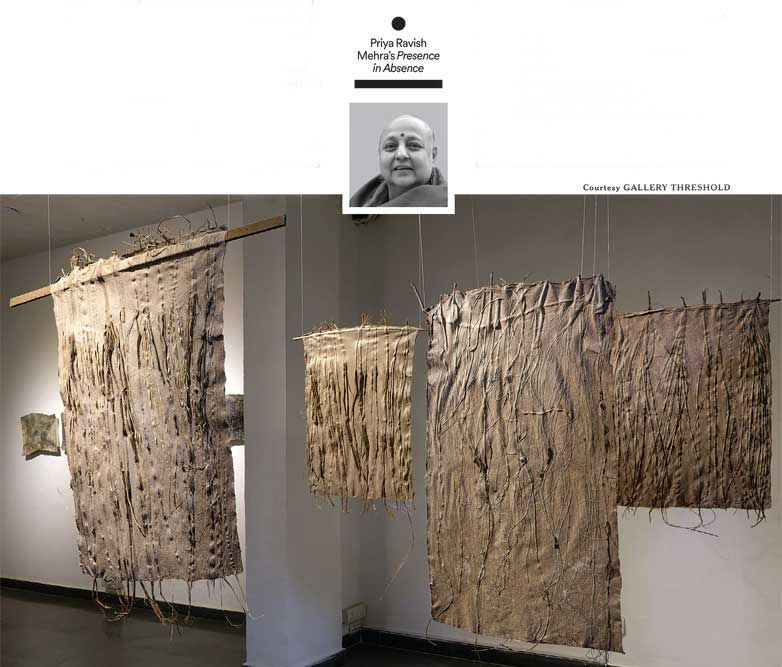 THEY SAY THAT adversity is the mother of all invention. This is perhaps truest for artists whose work triumphs despite great physical challenges. It is speculated that had it not been for Claude Monet’s astigmatism, he may never have painted Impression, Sunrise —the painting that was, at first, criticised by naysayers but then went on to become the talisman of the Impressionists. Another artist who immediately comes to mind is Mexican painter Frida Kahlo, who turned her debilitating accident into her muse and painted most of her self-portraits from her four-poster bed. In India, similarly, many artists have used their physical disabilities to interpret the world in new and different ways.

Cloth and paper pulp have never looked so beautiful together. An installation featuring diaphanous strands of paper made of daphne pulp and palm bark trail down like the skin shed by an animal when it is molting. In another work, ramie cotton fiber and a discarded sari border have an intimate conversation, while in a third, gauze and indigo coalesce with a discarded kantha fabric. These are some of the art works by Priya Ravish Mehra that are part of her solo on at Gallery Threshold in Delhi, curated by Tunty Chauhan and titled Presence in Absence.

Mehra does not adhere to terms like ‘crossover’ artist since her textile is a high art form and she does not make any distinction between easel painting and using materials such as cloth and paper pulp to express herself. She studied textile at Visva Bharti University, Santiniketan and then at Royal College of Art in London. She has been passionate about textile since her childhood, and her book on the rafoogars (darners) of Najibabad in Uttar Pradesh will hit the stands soon. “I chose the topic since I believe that rafoogiri is an art of preservation that is invisible and yet holds garments together when they have passed their use-by date. Besides preserving heritage garments like old pashmina shawls, it facilitates repair of the wear and tear of mundane clothes… Similarly, we do a daily rafoogiri to our body as well. I found that work and life come together,” says Mehra, who is fighting cancer.

While one would not want to focus on her illness, Mehra’s work demonstrates her engagement with the ephemeral nature of life and beauty. “My work is born purely out of process, the notion is to show damage and repair through the medium of paper pulp,” says Mehra, who takes her time in conceiving her work since the bark of ramie and daphne must be soaked and literally excavated before the pulp comes to the surface. This unraveling is also part of the process of the artist coming to terms with the fact that we all return to nature, eventually.

Mehra doesn’t believe that gender plays a role in her work. She says, “Why be clubbed or pigeon-holed as a ‘woman artist’ or ‘textile artist’? An artist is just an artist and our job is to make work that moves and makes people think or enjoy beauty.”

Bipin Kumar’s paintings are marked by vibrant colours and a geometrical approach towards nature. This is clear in the bright colours of his Duality series that examines the dual nature of emotions and situations, and the delicate dry pastels of his Environment series.

But Kumar is quick to play down his talent. He says, with a laugh, “I wanted to make my girlfriend’s portrait to impress her.” However, when he put pencil to paper, he realised art is more than making portraits of pretty girls. After completing his bachelor’s in fine arts at the Patna College of Art in 1983, he completed his master’s at the Delhi College of Art in 1992. He was soon working as an illustrator for magazines and newspapers. At the time, his work was very delicate and detailed. “I did a series on dogs that I often consider some of my finest works,” since it captures the plight of orphaned dogs with an economy of lines and a subtle, muted palette. In 2000, an accident rendered him almost blind—he lost an eye, which has been replaced with a glass one and his other eye had only 40 per cent vision for a brief while.

“My world was plunged into darkness and I had to learn how to see the world through one eye,” says the artist who turned to books to avoid the sympathetic gaze of his friends and peers. The new works that emerged after the accident were full of colour, says Kumar. From line work, he went on to rediscover colour and brought to his work boldness, harmony and rhythm that was new and exciting.

“I went back to the lessons given to me by my school teacher, Laxmi Narayan Nayak. It was he who taught me to render the ponderous nature of a brick or the delicateness of a petal,” says Kumar who also rediscovered dry pastel, which allowed him to have direct contact with the paint, smudging and rubbing the colour with his fingers rather than using a brush. Touch took precedence over sight and brought a new tactility to his work.

The stark blacks are pierced by a volley of dots and lines, scribbles and scratches. Spontaneous graffiti and figures emerge out of this voluble chaos like apogees of Zen calm. The daily jousting between canvas and brush is like a balm to his maladies. Pallav Chander has fought dyslexia from a young age (he was diagnosed in 1999) and it would be fair to say he has won half the battle, since he stands a proud artist at his second solo exhibition, Life Must Have its Mysteries, at Arts For All (A4A) in Delhi.

One could view the entire exhibition as self-portraits. “It explores the concept of love, numbers, gibberish dialect, subconscious imageries and a subjective observation of our contemporary society. In childhood, being diagnosed with dyslexia and dyscalculia, numbers and alphabets were never my best friends, yet I was always curious about both,” says Chander who channeled all his energy and frustrations with language and numbers into his art.

Besides taking to art at a young age, he is also a keen theatre actor, and has worked with directors such as Sohaila Kapur, Amal Allana and Kusum Haider. It did not help that his mother was famed painter Kanchan Chander. “I was always pushing him towards law or engineering so I could put my feet up and not worry about him. But Pallav was determined to become an artist,” says the now-proud mother who sent her son to study art at the Birmingham City University, UK. Since then, he has not looked back and has been part of over 20 shows, including his two solos.

In his work, Chander often makes mirror images, which is his way of dealing with the inversion of letters and numbers. He also experiments by representing the inverted letters in his paintings, where they appear as symbols. “Each piece I create is a continuation from the previous one I have completed. It is a process that helps me as an artist to develop and continue learning the mysteries not only of life but also of art,” he says.

Artist Balbir Krishan’s paintings celebrate the triumph of the human spirit. His aesthetic yet poignant canvases excavate the personal while addressing the universal. In his works, he foregrounds the plight of street children, riot and rape victims, disabled and disenfranchised sex workers. Importantly, his recent canvases have disrupted the silence around same-sex love; in fact, Krishan’s voice is one of the few within contemporary art that dwells on the male body. Through his muse, he addresses issues of gender and sexuality, human rights and social justice. His paintings contain the grim realities and exalted fantasies around masculinity; a meeting place for utopia and dystopia.

“I always knew I was different and that I was drawn to art and I loved the male form as my muse. I did not know how to express this initially. In fact, one could say I was scared to do so,” says Krishan who hails from an agrarian family from Bijrol village in Uttar Pradesh. Krishan began his tryst with art in the early 1990s, where he did his bachelor’s in art history in Baraut, Uttar Pradesh. But while pursuing his master’s in Agra in 1996, he had a tragic train accident, where he lost both his legs from the knee downwards.

Despite this setback, he persevered and completed his education with the support of his teachers and friends. His Handicapped Life (2007-2008) series tells us how he coped with life despite being differently abled. The fractured and severed male body is depicted playing football, running through the wind with leaves blowing against his body. Disability does not come in the way of celebration. One of the most poignant works of this series is a mirror image of two headless torsos merging into one. It underlines his desire to ‘belong’ and the sense of alienation.

These works hint towards his alternative sexuality but it was the work of artist Bhupen Khakhar that inspired him to ‘come out of the closet.’ The results were less than ideal, to put it mildly. His family disowned him. More than his physical disability, Krishan’s disclosure was met with hostility and violence. He was physically attacked and his paintings were vandalised at his solo exhibition at Lalit Kala Akademi, New Delhi in 2012. Again, in 2013, his solo exhibition in Hyderabad, titled My Bed of Roses, hosted by the Muse Art Gallery, faced opposition and had to be shut after a successful opening. In 2014, his canvas Hari Hara, which travelled as part of a three-city exhibition tour, hosted by Engendered, was also targeted.

Over time, the struggle to deal with the dual oppression has led him to embark upon life in the US as an immigrant with his spouse, Michael. He hopes to create artwork free from censure. “I need freedom to create my art and if I cannot find it, I will fight for it,” he says.

Given the discriminatory practices against people who are terminally ill or fighting disability, the struggles faced by these artists is ongoing. What they have done is re-imagine their physical trials in terms of their art. And thanks to them, we see a richer, deeper world.