The pathos and prowess of three recent poetry collections 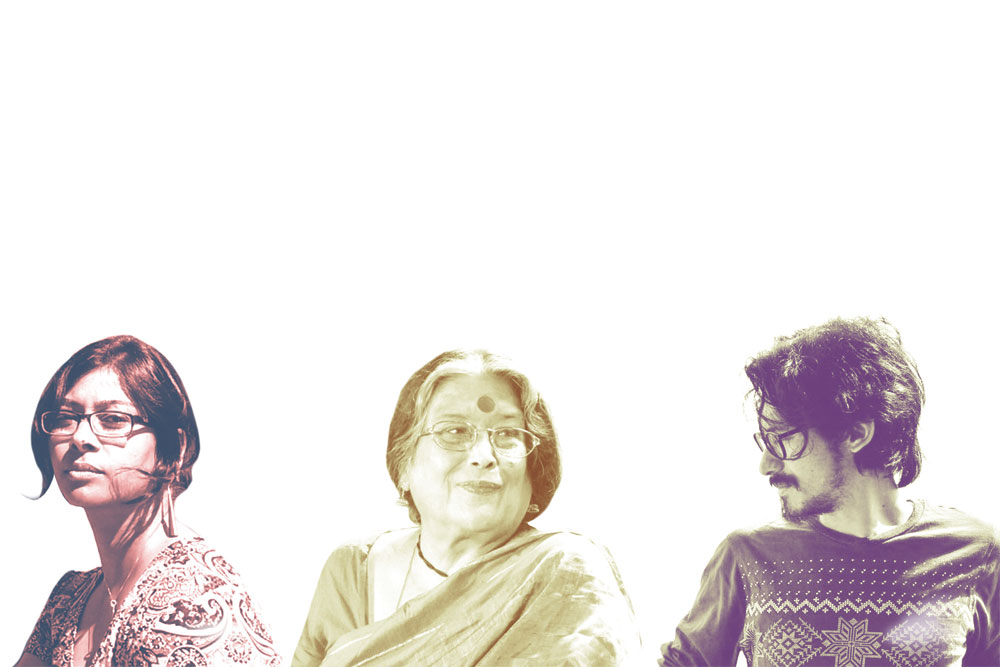 
TO ASK SOMEBODY why they read (or indeed, write) poetry is a loaded question at the best of times. Which is to say, poetry is perhaps the most intimate of literary forms and with intimacy must necessarily come pathos and vulnerability and danger; monsters under the bed that you and you alone can see. I’ve found that the poems I remember most clearly, the ones that command that extra bit of attention, excel at merging the personal with the identifiably universal. During this merg­ing the poem cannot stop at saying something honest—it must say something true, perhaps something uncomfortable or even uncomfortably funny.

Lost, Hurt, or in Transit Beautiful is Chhetri’s second book of poems (after 2016’s Slow Startle, published by The (Great) Indian Poetry Collective), begins with a gruesome spectacle in a poem ominously titled ‘King’s Feedery’.

“After the rape & the bloodbath, the savage king / & his men retired to a long shed built in an open / field by a thin river fashioned for this lull in the pillaging / so the horses could rest. One by one, they scrubbed / blood off their fingers & faces & sat down to devour / a feast of rice & goat served by the villagers.”

This reads like a richly imagined, tactile evocation of a medieval massacre, something that surely took place hundreds of years ago. But the poet reveals that this legend is, in fact, told at a local lodge (near his childhood home) whose Bangla name means, literally, ‘King’s Feedery’. This lodge becomes the bridge for the poem to switch from historic sweep to familial grief: “We say Death stays here when it visits someone in the family”. From that point on, the poem slips into mini-obituaries for three different family members.


It’s a perfectly executed sleight-of-hand and it’s a refinement on a certain tonality Chhetri developed in Slow Startle, a way of looking at the past. In that volume, the poem ‘Blueprint Among the Ashes’ begins with this startling moment: “The old man loved his sleep, / my mother remarked to the visitors / a week after Grandfather died. / I was twelve / & the cruel metaphor wasn’t lost on me.” The very next poem, ‘On Not Visiting Him This Year’ introduces his maternal grandfather’s deafness-in-progress with the line: “I pictured him snipping little wires of communication with the world using a pruning shear.”

Chhetri’s work, therefore, has distinct ‘movements’ that build up to a mood or a point of view. Lost, Hurt, or in Transit Beautiful has four parts: ‘Katabasis’, ‘Locus Amoenus’, ‘Erato’ and ‘Grief Deer’. The opening section, for instance, is a reference to the twin theoretical terms katabasis and anabasis, indicat­ing (literary) ‘descent’ and ‘ascent’, respectively. Notes from the Underground is clearly an example of katabasis, as is the Salman Rushdie novel The Ground Beneath Her Feet (it even uses the legend of Orpheus’ journey to the underworld to drive home the classical point).

Nabaneeta Dev Sen clearly believed that poetry could do anything, retrieve meaning from meaninglessness — but what of the poetry of ‘doing nothing’

In this book, nowhere is this descent clearer or more harrowing than the poem ‘Lamentation for a Failed Revolution’, which draws upon the Gorkhaland Movement. In a recent interview, Chhetri (who is Nepali-Indian himself) said that this poem is about “the last iteration of (…) a hun­dred-year-old movement demanding self-determination and a separate Indian state for the Nepali-speaking population in West Bengal”. It’s easily one of the most memorable achievements of this book, deriving its structure once again from ancient Greek sources: this time, “the Moirolói and the ritual lament tradition in ancient Greek.” The Greek lament depends on a call-and-response tandem between choirs. Observe how beautifully Chhetri adapts this structure on the page:

“I sat at home paralyzed On TV blared
their newsrooms gagged ours boarded nailed
shut I watched The Turin Horse that horse manifesting
a dumb mutiny in a world about to go still
Winter of 1986:
Grandfather home after a week in the lock-up
hung by the feet baton-blued calves taste of dirt”

The Turin Horse is Bela Tarr’s 2011 black-and-white film about the philosopher Friedrich Nietzsche’s last days; he was rumoured to have suffered a mental breakdown upon witness­ing a horse being whipped in Turin. With such primal imagery, Chhetri envelops the poem’s titular revolution in a kind of Nietzschean bleakness, wherein entities like god or the human soul have no currency.

An altogether different kind of revolution lies at the heart of ‘Take Back the Night’, one of the many powerful short poems in Nabaneeta Dev Sen’s last collection Acrobat. Dev Sen (1938-2019) was a prolific bilingual writer, translator and academic who wrote scores of books across genres in Bangla and English. A handful of the poems in this volume were originally written in English (a political choice on the poet’s part; she believed Indian writers ought to do more for their own languages) while most have been translated by Nan­dana Dev Sen, the poet’s daughter. ‘Take Back the Night’, all of six lines and 44 words long, shares its name with the 70s-era international non-profit that seeks to end sexual and domestic violence.

“Man: In the twilight, I could still hear the lark
Woman: The night was moonless, oppressively dark
Man: In the flowering woods, a night fairy walked
Woman: In the Sundarbans the man-eater stalked
Man: In that fragrant springtime air
Woman: Blood-drenched remains lay there”

With great economy, this poem delineates the differences between the man and the woman’s perspectives on the forest (the man’s waxing poetic, while the woman’s words are ominous), and on the nature of mythmaking itself (the man dreams of fairies while the woman fears a man-eating tiger, an obvious stand-in for predatory men). The unspecified “Man” and “Woman” pronunciations give this poem an air of timelessness, which is par for the course for Acrobat. At several points in the collection the poems play with concepts of time dilation, new ways of connecting the past and the future, and so on.

In fact, in the titular poem, the ‘acrobatics’ being referred to are temporal.

“She thought she knew acrobatics rather well.
That she could juggle time with both hands,
Play with the now, right next to the then (…)”

Of course, the playfulness or the ‘juggling’ does not stop on time. Dev Sen was just as interested in the possibilities of language itself, in the endless iterations and hybridisations that mark the ‘games’ poets play. Indeed, in her 1985 book Counterpoints: Essays in Comparative Literature, she described the writer as “a god in his own right”, with the ability to create entire worlds.

“(…) it is up to man again to re-establish order, as Oedipus won over the Sphynx by rediscovering the original purpose of words.” The game that the writer plays is much like the challenge Oedipus accepted at the gate of the city of Thebes. Language is the Sphynx that must be tamed, words must not fly away from thought.

Here, in a poem called ‘Combustion’ she compares language to a literal volcano.

There are notable technical achievements amidst the power-packed brevity, too. ‘Growing Lesson’, which covers 85 much the same ground even more eloquently, is structured like a 16th century Spanish ‘quintilla’, a form comprising of octasyl­labic lines arranged in five-line stanzas, with no more than two rhymes per stanza and no rhyming couplets at the end (‘Grow­ing Lesson’ uses the AABAB rhyme scheme, although ABBAB, ABABA et al also work for a quintilla). In the poem’s concluding second stanza, Dev Sen writes:

“Listen, boy, it’s time for you to grow.
Words can be as fierce, don’t you know?
The treachery that lingers on tongue tips—
Beyond the world that all your dreams show,
Know that blood can be easily shed by lips.”

Dev Sen clearly believed that poetry could do anything, retrieve meaning from meaninglessness — but what of the poetry of ‘doing nothing’, poems that are interested in travelling the “road between clarity and obscurity”? ‘Dear Stranger Deciphering this Ancient Script’, the opening poem in Sridala Swami’s ‘Run for the Shadows’, ends with this knowing side-glance of a line: “Dear stranger, I say these things because I know they will mean nothing to you.” Later in the book, Swami writes:

“I am paraphrasing two poets when I say
I am doing nothing and that is poetry.
Listen.”

At the risk of stating the obvious, I’ll point out that the space before that final ‘Listen’ is significant — this inter­regnum of silence (“all good poetry tends towards silence,” Swami had written a decade ago, in the introduction to her debut book A Reluctant Survivor) can be read as an invitation to ‘do nothing’, to revel in stillness amidst the dizzying velocity of the world. However, it can just as easily be interpreted as the pause of comprehension, the reader’s complicity in the decidedly grim business of placing word after word after word (“Dear stranger who makes my work timeless and immortal (…)”, as a line from the book’s opening poem goes).

Swami’s previous works, Escape Artist (2014) and A Reluctant Survivor (2007), are among my favourite Indian po­etry books. Line-by-line, she’s one of the best English-language poets in India, I reckon. You’d be hard-pressed to find an awkwardly placed or purposeless word in Swami’s poems; everything is crystalline and almost nothing is low-stakes, emotionally speaking.

The nimble assuredness of those early poems feels more like full-blown virtuosity in Run for the Shadows. And despite the ‘doing nothing’ proviso, this is a collection that’s inter­ested in a great many things: the fragility of physical forms (“As fire fixes clay/ age has fixed me / and it’s fixed me good”), the speech patterns of the future, the synaesthetic appeal of mythology. And like always with Swami, this collection uses scientific and technical (especially cinematic) vocabulary in surprising ways.

The concluding poem in the collection, for example, is a Mahabharata riff called ‘AI Winter’, and imagines the freshly departed Dronacharya’s wandering soul as a kind of ‘intelligence’ (the AI in the title refers, of course, to artificial intelligence) haunting his immortal son Ashwatthama, a Wandering Jew-like figure in Hindu mythology cursed to travel this earth, incapable of shuffling off the mortal coil. Elsewhere, a poem called ‘Scene’ features the lines “A forest is a stereogram. / Birds in dolby surround. / Movement, like the sky, invisible.”

These little touches are reminiscent of works like ‘Chromatography’, a poem from Escape Artist where Swami described the poet’s creative process via four sections called ‘Solvent’, ‘Filter’, ‘Diffusions’ and ‘Separations’. Poetry itself is one of Swami’s great subjects, after all. And with age and experience, her work has featured increasingly sophisti­cated interplays between text and subtext, “meaning and shadow”, as the poet Arundhathi Subramaniam points out on the back cover of Run for the Shadows.

In ‘Three False Starts and a Conclusion’, Swami writes, “Because this is what I do best I do it. Reluctantly / and with rust coating all. (…)” Some of these poems may indeed have been written reluctantly. They won’t be read that way, I can assure you.