The Place to Fix Dog Cancer 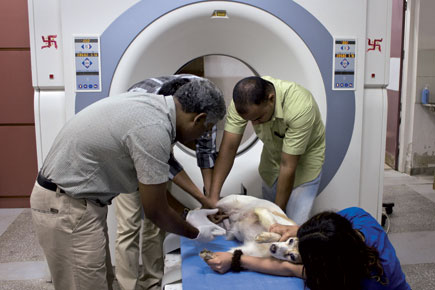 
When Dr Rajiv Sarin lifts a CT scan to consider it against the light, all other heads in the room appear to imitate his. One after the other, as if to a synchronised beat, lab technicians and doctors rise to examine the scan. Except for a young woman standing among them. Dressed in blue tees and denim shorts, and carrying a dog in her arms, her eyes do not leave Dr Sarin. She is waiting for his verdict.

Dr Sarin says the dog, Cleo, has breast cancer and that the disease is quickly spreading. The only solution is surgery, followed by a number of sessions of radiation and chemotherapy. The cancer is so widespread already that the doctor is worried if Cleo has enough skin to get sutured back together. Also, at ten, Cleo, is not young.

Kainaz Dadina, the young woman in the room, asks, “Will the treatment, all this chemo and radiation, hurt her?” A pall of gloomy silence descends on the room as Dr Sarin nods in agreement. When Dadina recovers from the shock, she finds herself unable to complete her sentences. “Instead, do you think I should…? I don’t want her to suffer anymore. Should I…?” She looks at Cleo as she says this, her eyes moist.

Dr Sarin puts an affectionate hand on her shoulder and promises to do his best. He tells her, “Cleo is at the best place.” Dr Sarin is the director of the Advanced Centre in Treatment, Research, Education and Care of Cancer (ACTREC). Affiliated to the Tata Memorial Hospital, ACTREC is located on a 60 acre campus, adjacent to a golf course in Mumbai’s sprawling satellite town, Navi Mumbai. It runs a 100-bed hospital but mainly focuses on research and education in cancer.

It was established in 1952 in Parel, before moving to its current location in Kharghar. Around five years ago, veterinarian oncologist Dr Pradip Chaudhari, who is part of ACTREC’s comparative oncology department, started tending to animals suffering from cancer. He realised that very few in the city knew that cancer also afflicts animals. And that every time a dog or cat was diagnosed with cancer, the best one could do was to put it to sleep. Along with a team of other veterinarians from the institute, Dr Chaudhari started treating animals suffering from cancer. He used chemotherapy sessions and conducted surgeries. And, after securing permission, even started using radiation machines meant for human patients at the institute to treat animals.

In the past five years, Dr Chaudhari and his team have tended to over 350 animals. However, all of this was conducted in an ad hoc manner. While most of these were dogs, three years ago he also treated a Royal Bengal Tiger and a python in the Byculla zoo. The tiger was suffering from melanoma and the python from oral cancer. The lifespans of these animals did increase with the use of radiation therapies, says Dr Chaudhari, but the two eventually succumbed to their illnesses.

“My question is: why let an animal die when treatment is available?” he says.

About a month ago, Dr Chaudhari and his team took another step in this direction. ACTREC launched a cancer care centre for animals, the first of its kind in the country. This centre provides all facilities—tests, scans, radiotherapy, chemotherapy and surgeries—a human cancer patient has access to. It is located in a far corner of the campus, has a room for surgeries, another dedicated space for checkups, and also a shelter for animals to recuperate during treatment. Along with Dr Chaudhari, a veterinarian surgeon, Dr Kiran Bendalie, and two lab technicians work there. Dr Sarin also involves himself occasionally with the cases that come to the centre.

Apart from providing treatment and care for animals, the centre will also conduct research. “It is necessary to understand why cancer affects our pets, why certain types of cancer are more common in certain breeds, and how to treat them more effectively with minimal side effects,” he says. Among the various dogs he has treated so far, mostly strays, he has noticed a high number of Canine Transmissible Venereal Tumours or Sticker tumours. This type of cancer affects a canine’s genitals, and is considered one of only three types of transmissible cancers. It usually spreads through sexual intercourse.

The other two known forms of transmissible cancer are the Devil Facial Tumour Disease, which spreads in Tasmanian devils through bites, and the Contagious Reticulum Cell Sarcoma, which affects Syrian hamsters and spreads through the bite of a particular type of mosquito. According to Dr Chaudhari, the high incidence of Sticker tumour in India is because the country has a large number of stray dogs. These dogs mate regularly and this, he feels, leads to the high prevalence of the disease.

It is Saturday afternoon. The waiting room outside the radiation department is occupied by two men and their dogs—a large mongrel with a jet black coat and a small Pomeranian. The men look pensive, and rise when they see Dr Chaudhari. The doctor smiles reassuringly and moves to the room with the radiation machine.

The first to be brought in is the Pomeranian, Buzo. The small canine underwent surgery in January, but the doctors were unable to remove the entire tumour. It was located in the upper jaw, and the doctors were afraid that if they did so, the animal might lose its sense of smell. Buzo, who is already 15 years of age, has also developed cataracts in both eyes. She is so weak that she struggles to stand on all fours; her hind legs just collapse. The owners, however, do not want to give up on Buzo just yet.

Buzo is sedated and placed under a teletherapy, or radiation, machine. She is scared and wets herself. Red linear lights from the machine focus on the animal’s mouth, and once the area that needs radiotherapy has been determined, she is left alone with the machine for the next seven minutes. After about seven minutes, she is wheeled out. This was her fourth session of radiotherapy; two sessions remain. Although Dr Chaudhari will not admit it, he does not look very hopeful about Buzo’s health.

The other bitch, Dianna, looks healthier. Its owner, Vasudevan Sridharan, found her about six years ago outside his housing society. She was the offspring of a male Labrador and a female stray.

He brought her home. This was roughly the same time he and his wife had a daughter. And ever since, his daughter and Dianna have shared, as he says, a special bond.

Sridharan first noticed a discolouring in Dianna’s lower jaw a few months ago. He was surprised when a veterinarian told him that Dianna had oral cancer. On his veterinarian’s suggestion, Sridharan contacted Dr Chaudhuri. Today is her sixth and last radiotherapy session. Dianna is sedated, and for seven minutes, she too is left alone in the radiation room. During this time, Sridharan assails Dr Chaudhuri with many questions on whether cancers are known to relapse in dogs. The doctor just assures him that his pet will recover.

The option of treating cancer in pets is not always easy. Dadina, who works as a hairstylist and lives with her mother and Cleo in a South Bombay apartment, is unsure if she should try to get Cleo treated. Treatment in Cleo’s case, because of the advanced state of her cancer, is likely to be a painful process. The other option is to let Cleo be for now and decide whether to put her to sleep if and when her condition deteriorates.

“I have tried everything,” a frustrated Dadina says. Early this year, a veterinarian diagnosed her pet with breast cancer, and then conducted a surgery. However, Cleo’s condition worsened and the infection spread. The vet refused to consider that Cleo might still have cancer. Dadina consulted other vets, and has now even started visiting a homeopath. Cleo wears an amulet around her neck to ward off illness.

“She has been with us for over ten years. And I can’t bear to see her like this. This is my last hope,” says Dadina. She says she will decide on whether to go ahead with the surgery within the next week.

Back in the waiting room, Sridharan is happy to see Dianna being wheeled out. Her radiation sessions are over, but Sridharan still takes an appointment with Dr Chaudhuri for next week. He thanks the doctor profusely, wraps his pet in a green blanket and carries her to his car.