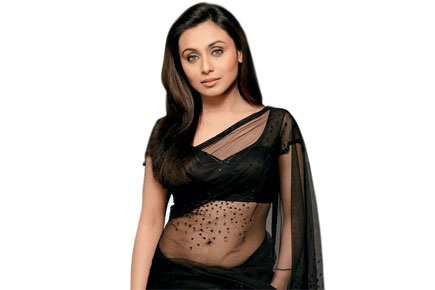 
Ho hum… there’s talk again that Rani Mukherjee and Aditya Chopra are all set to tie the knot shortly. The actress, who rang in her birthday recently in London, where Aditya is supervising the shoot of his father Yash Chopra’s new film, is said to have settled in comfortably with his family, after incessant rumours that Yash and Pam Chopra were not thrilled about the match. Some weeks ago, the actress was spotted at Mumbai airport, returning from a foreign holiday with the entire Chopra clan, and last Diwali, the paparazzi managed to shoot pictures of Rani and the Chopras lighting firecrackers in the compound of their Juhu bungalow.

The actress, however, has stayed mum on the matter, flatly refusing to speak publicly about her relationship with the Dilwale Dulhania Le Jayenge director. A source, meanwhile, reveals that Aditya Chopra advised her last year not to turn down an edgy Anurag Kashyap-produced project titled Aiyya that she’d been offered but was unsure about.

The film, apparently, is a comedy that winks at the over-the-top Bollywood cinema of the 1980s and 1990s, where Rani is paired opposite Malayalam star Prithviraj. Cast as a middle-class Marathi girl with a tendency to behave theatrically, Rani has apparently surpassed the expectations of the film’s makers, who can’t stop praising her performance. The highlight, they insist, is a naughty song packed with double entendre lyrics that will be filmed on the actress.

When the makers of Shootout at Wadala began filming their thriller in March, they couldn’t possibly have anticipated just what a bumpy ride they were in for. The film’s very first schedule went haywire when an FIR was registered against director Sanjay Gupta for sending out a mahurat invitation in the form of a police summons signed by a (fake) commissioner. The mood on the set was tense on the first day of the shoot, and with rumours flying that an arrest was imminent, Gupta reportedly didn’t show up the next day, leaving his second unit to film the day’s scenes. It took a few days for things to settle down (and for Gupta to seek and be granted anticipatory bail in the ‘cheating and forgery’ case that was registered), before shooting could comfortably resume.

Then, John Abraham, one of the film’s leading men, got unwell, throwing the shoot into a tailspin again. His health wasn’t the only thing keeping him down, though. Barely had the actor recovered that it was his turn to land in a legal soup. This time it was a rash driving case from all the way back in 2006 that reared its ugly head again.

Shooting was suspended temporarily when the actor had to make an appearance at a sessions court; and when his bail application was denied that Friday afternoon, things were not looking good. But just hours after being taken into police custody, John’s lawyers managed to secure bail from the Bombay High Court, thus ending all speculation that the actor might have to spend his weekend behind bars.

The Wadala schedule picked up again shortly after these road bumps, with filming taking place alternately at a Navi Mumbai chawl and a juvenile detention centre in Parel. But with last week’s tragic passing of Mona Kapoor, estranged sister-in-law of the film’s star, Anil Kapoor, a few days were again lost. While nobody could hold it against the actor for wanting to take some time off to attend the funeral rites, it’s learnt that unit members  have begun to joke that their film is jinxed.

He Calls This a Party Trick

He makes tasteless films that rake in big bucks. And word on the street is that he’s just as tasteless as his movies. It’s well known in Bollywood circles that this actor/TV host/filmmaker has embarrassed many a female acquaintance by talking constantly about his… umm… ‘endowment’, and has even flaunted it to those reluctant to buy his tall claims.

A friend of the gentle(?)man reveals that he has now taken a picture of it on his cell phone, and happily pulls it out at private gatherings just to watch his friends squirm.