Songwriting by Indian bands in English has stood out for all the wrong reasons. It’s mostly unremarkable. I can’t remember any great pop song in English that I can sing word for word written by an Indian band in the past year 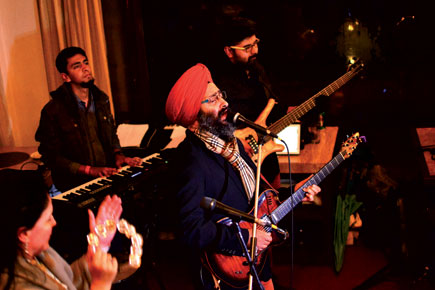 Recently, a friend posed the question: “So who’s the big new talent in India, in Bombay?” I would have hung my head in shame but for Bhau, a Marathi rapper from Kolhapur signed on by the Universal Music Publishing Group. Pradeep Kashikar, who goes by the name Bhau, is the most exciting artist I heard last year. He is a terrific rapper, is unapologetic about his roots and may have a long way to go as a songwriter—his attempt at raising socio-political issues is but superficial in his song Yuva Halla Bol, but it’s still a start. If Bhau doesn’t get enough gigs, or, say, an offer to break into Hindi films, he will never be heard, but this is not just a call to champion lesser known singers and songwriters.

The reason Bhau stands out is that he is a wordsmith who raps in Marathi. Few Indian bands attempt writing in a language other than English and fewer bands write lyrics influenced by their social environment. Songwriting by Indian bands in English has stood out for all the wrong reasons. It’s mostly unremarkable. I can’t remember any great pop song in English that I can sing word for word written by an Indian band in the past year. Indian bands have been appropriating Western sounds and instruments for a few decades now and are most comfortable writing in English. This is probably one of the reasons that an international audience doesn’t think the band is Indian enough. I’ve had this discussion with several musicians. Pentagram, one of the most popular rock bands in the country, which is now on a break, has four albums out with all-English lyrics. Their guitarist Randolph Correia dismisses the argument that Indian bands need to write songs in an Indian language to impress an audience. He says, “We’re having this conversation in English. It’s very narrow-minded for people to think that if you’re a band from India or Bombay, you have to have an Indian sound. We had rock, jazz and blues in India even in 1978. This is lazy feedback. You’re not standing at a world music stage. C’mon, this is rock n roll.”

I met singer Rabbi Shergill recently and he had a contrarian viewpoint. He says he wishes he hadn’t played the guitar on his breakthrough debut album Rabbi, released in 2004. He says, “Why do I pick up the guitar? My father didn’t play it. He didn’t even know of the instrument. It doesn’t exist in my village. Why is 100 per cent of all Indian pop music based on guitar, bass, drums and keyboard? Twelve years of schooling in a public school in India is going to turn you White.” It’s only been 68 years since Indian Independence, Shergill argued, and I tried to present a case for freedom of expression. And failed.

Of course, there are a few Indian bands that write lyrics which speak to the small community of alternative music fans with concerns this audience can immediately relate to, while some other bands reach out to a larger section of the audience. Bengaluru’s alt rock band Thermal and a Quarter released their sixth album The Scene this year that pointed out the flaws in the Indian music scene—from the obsession with dance music to musicians not focusing on their craft. Pentagram has written songs such as Mental Zero, which is a comment on the general apathy among the current generation with lines like ‘I can take you through the process/But I can’t make you think.’ Sridhar/Thayil, also on a break right now, wrote some provocative words, including, ‘Your cunt, my country,’ the opening line of their song One Damn Nation that took down everything that is wrong with the system.

There’s hope yet as long as bands such as Indian Ocean from Delhi continue to write songs such as Gar Ho Sake from their last album Tandanu, released in 2014. An anti-communalism anthem, Gar Ho Sake may not only embolden newer bands to write in Hindi or another regional language, but may also rouse them to a socio-political discourse. Until then, I’ll settle for soppy love songs or meaningless drivel that is passed off for lyrics.