At the recent Amazon India Fashion Week, almost everything was tagged as “androgynous” because for some time now, it has become a fad, and if women didn’t strut around in men’s clothing, they were not cool 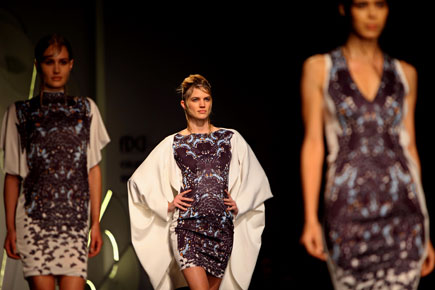 What the poster boy of androgyny Andreja Pejic, a Bosnian male model, described as his “situation” referring to the concomitant confusion of the philosophy, and his ability to blur the lines, is manifest in the outdoor smoking zone at the fashion week that recently concluded in Delhi. While the runway was all drama where female models strutted in suits and jackets exuding that power and emancipation from gender lines, here men were acting out their own responses to androgyny as a trend or philosophy. Fashion’s relationship with androgyny, which means fusing gender lines, has been a steady one. With Andrej Pejic, who donned Jean Paul Gaultier’s bridal wear, becoming the face of fashion, fashion’s tryst with androgyny has come a full circle. A New York Times article celebrated the androgynous model with an article titled "The Prettiest Boy in the World."

Rage is a fashion blogger, and dressed in a bright pink bomber jacket with sequins, and gold trimmings, and paired with purple silk pants, and a chunky necklace, he is talking about launching his menswear label.

“It would be this,” he says, as he puffs away at his cigarette in the outdoor smoking zone at the recently concluded Amazon Fashion Week in the capital. Around him there are others paying their own tributes to androgyny. A Sikh fashion blogger dressed in an abaya is being clicked by the lost fashion photographers who have been asked to profile interesting looks. There are others, too. A man in a skirt, and a man in a sari. There’s a woman in a lungi, and so on and so forth. On the ramp, the designers have followed suit. Nothing is too feminine anymore. Over the last few fashion weeks, there’s been a growing cult of those that are incorporating androgyny, which means sexual ambiguity in terms of fashion, or in other words, incorporating both masculine and feminine, in their designs. But beyond the word itself, and its superficial connotation of dressing up women in menswear, most designers aren’t sure if they think it is a state of mind, or just fashion that is slave to western trends, and forecasts.

Rage refers to other designers who have been blurring the lines dressing men in skirts, and women in pant suits. But it is nothing new, a reputed designer says. He opened the Amazon India Fashion Week with a lot of drama. The logic was simple. He didn’t want to bore people, and it was an ode to hospitals. The set resembled a hospital, and models with their hair pulled back crawled, and climbed, and walked with measured grace reflecting the state of mind in a place where he says the modern man or women is born, and in most cases end up before the final farewell. Rajesh Pratap Singh’s ode to hospitals was something he remembered from childhood. He says he spent a lot of time in hospitals, and it was up to the critics, and the intellectuals to add their interpretations to his collection. They said he made his models look stern and professional, and androgynous with their hair pulled tightly back, and donning ensembles that defied gender roles. For his part, he always liked women devoid of frills and frocks. He always dressed them up in jackets, and pants. His collection wasinstantly tagged as androgynous.

He laughs over it.

“There’s something about women in uniform. I don’t want women as romantic divas. For me, it’s not a trend. It is about how we see women. My work is more aboutprocesses. If there is a deeper psychoanalysis to it, it is coming from elsewhere,” he says. “I just like to see women in control.”

At the fashion week, there was a lot of sartorial gender blending that was pervasive. Even those that are known to celebrate the wild and bohemian woman who loves flowers, and is in love, played their own tributes to androgyny. Aneeth Arora, whose label Pero has been one of the most successful in terms of sales, and reach, used Princess Pea as an inspiration and paid tribute to the uniform. Although distinctly feminine with handwoven fabrics, the collection was all about the alter ego in the designer’s own words. In her note, she also referred to androgyny where models were seen pairing a lace slip with a military inspired jacket in khaki. Aneeth, who has always paid homage to the women with lace, and embroidery and soft fabrics, turned towards more structured pieces while keeping her essence intact with vintage floral patterns, and lace. Similarly, Rina Singh of Eka whose collection was inspired by memory, said she incorporated androgyny in her collection because a trend is what designers must keep in mind, and the game is to retain the brand’s aesthetics along with the need of the hour forecasts.

Talking of alter egos, it is David Bowie’s transformation as Ziggy Stardust that first set the benchmark. Long ago, when Andy Warhol ran the HQ of world’s alternative people in New York City with drag queens in their most fabulous ways inhabiting what came to be known as The Factory, David Bowie had gone to meet him to sing to him, and he hadlong hair, and wore Mary Janes with no matching socks. That’s when he was taken in, and his alter ego was created for stage. Ziggy Stardust had red hair, and a lot of makeup, and wore Japanese style clothes. And even after Ziggy Stardust was over, Bowie was never shy of looking “unbeautiful”. And then there was Lady Gaga who came out with her male alter ego in a Mugler collection, and wrote a song You and I as a tribute to it.

For fashion world, Bowie remains an enigma. For those that are pushing the philosophy of androgyny, which has now become a trend and sort of everyone’s thing to indulge so they aren’t off the bandwagon, Bowie is the epitome of that philosophy. But unfortunately, there are no alter egos here, and that’s when androgyny as a fashion philosophy starts to get bastardadized. At the recent Amazon India Fashion Week, almost everything was tagged as “androgynous” because for some time now, it has become a fad, and if women didn’t strut around in men’s clothing, they were not cool.

Ruchika Sachdeva, who is hailed as the queen of androgyny in Indian fashion, and owns the label Bodice, says she picked up her references from London where she studied, and spent almost four years before returning to India to launch her own label. Her recent collection, which featured her minimalist sense of style had loose silhouettes, layering, cuffed pants and pleated skirts in muted shades.

Sachdeva, who won the Vogue India Fashion Fund last year, says growing up in a traditional family in West Delhi made her yearn for an equal space. She always thought loose clothes flattered her personality, and when she was in London, she shopped at thrift stores and customized the clothes. Her friends liked her style, and she started customizing clothes for them. Although her mother, she says, still insists on jewelry, and other things, she says she has started to appreciate her daughter’s sense of style.

“Androgyny started with me as a philosophy,” she says. “Now, it is a trend here. But ever since I began, I have been doing it, and even though it didn’t make much sense commercially in the beginning, it has started to gain momentum.”

Her philosophy is less if more, and editing, she says, is paramount for a designer. She isn’t against embellishments which form the core of Indian design, but it is more about being secure in less.

“It is about what you believe in,” she says. “I was drawn to androgyny, and it felt you belonged there. But as a trend, it has always been there. People may get bored of it, and another trend will come about.”

If designers didn’t incorporate the woman-manly as Virginia Woolf once said and Tilda Swanson popularized, theywere not in sync with the socio-political order of things, which keep changing. Everything is related, and androgyny as a philosophy has always existed in India if you looked at the eunuchs, says Arjun Saluja, who has always presented his androgynous style in various ways on the runway, including dressing up men in skirts, and women in clothing that collapsed gender.

“They were revolutions. That is why it held relevance. Androgyny is a state of mind. Clothes become a way of expression. It is a trend that has developed. We can say women need to be stronger. But women have always been strong. I wasn’t surprised with androgyny because I was brought up in a way where they didn’t differentiate. We were free. At a certain point in history, women needed props to break free. Men needed to express. Why was Ziggy stardust created?”

Mohnish Kabir Malhotra, who has been in the fashion PR business for a long time, and has a client list that includes some of the big names, says, it started to gain momentum after 1999. Before then, western wear for women were almost always imported, and then they started to make it here, he says.

There are those that are celebrating the feminine but with the sari making a comeback, the blouse itself has started to look more like a jacket, or a shirt. Take for instance Sanjay Garg of Raw Mango, whose jacket blouses are becoming popular. At the fashion week, senior designers David Abraham and Rakesh Thakore presented their stylized versions of sari paired with a shirt, and a jacket. That’s when a fashion editor had exclaimed saying it was “fashion orgasm”. But whether it is a philosophy, which means society is progressing in terms of gender roles, or trend-driven collections that are commercially viable, androgyny is here to stay in Indian fashion as more and more designers are experimenting with it, and collapsing notions of gender roles in their own ways.

While India is still to get its own Andrej Pejic, or a Ziggy Stardust kind of a celebrity, one only needs to sit in the smoking zone at the fashion week to understand the direction Indian fashion is taking. And mostinteresting are the amalgamation of Indian silhouettes with structured jackets, and blouses for women, or skirts paired with bombers for men. Either ways, Rage knows in a year or so, when his menswear collection is ready with its loud gold trims, and pink and purple shades, it will be accepted widely.

The next day, Rage is dressed in a black and gold brocade jacket, and black silk pants. And he smiles.

A model who is sporting a loose shirt, and a belted jacket over jeans and military style boots, smiles back.