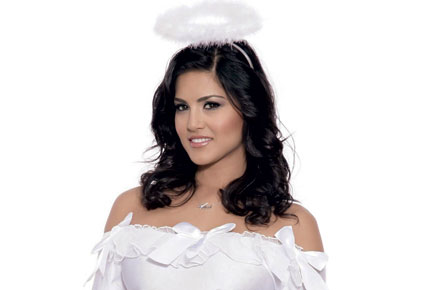 Having chanced upon Leone’s personal website, Kareena and her friends allegedly clicked on a video, only to discover to their surprise that the young lady was in the business of ‘seriously adult entertainment’. After a few minutes of uttering “chhee” and “yuck” while keeping their eyes peeled to the screen, the actress and her friends logged off, and are believed to have spent the next ten minutes chuckling away conspiratorially at their discovery.

Anyone who so much as passes the street within a three-kilometre radius of Shahid Kapoor is forced to look at shirtless pictures of the actor on his cell phone, say industry insiders. Obsessed with clicking pictures of his flat stomach and six-pack abs, the actor happily flaunts his body shots to anyone who’s willing to take a glance.

Turns out Shahid has a collection of pictures of himself in various poses, sporting no shirt. He chooses among these to use as his display picture on his BlackBerry, and dutifully replaces the picture with a new one every day. In the gym, reportedly, he’ll grab a buddy, make him stand alongside himself facing the mirror, and insist that both of them lift their tank tops and take a picture together.

Even assistant directors on the sets haven’t been spared. While shooting director Kunal Kohli’s film recently, virtually every AD was given a long lecture on health and fitness by Shahid, and was asked to lift his shirt, so the actor could lift his own and make the poor assistant feel bad about his body.

The Lady Who Hijacks Lunches

South Mumbai’s ladies-who-lunch appear to be cheesed off with a well-known suburban jewellery designer, the wife of a has-been male actor, who they claim has made it a habit recently of hijacking their brunches and turning them into business opportunities for herself.

For one, they insist the lady in question—a former model—doesn’t actually design the jewellery, merely acquires readymade pieces from Dubai and shamelessly passes them off as her own, adding a hefty commission for herself to the price of the piece. At parties and brunches, she’ll reportedly pull a rock out of her purse and pass it around the table, cooing: “Only one lakh rupees”, in an attempt to lure her swish crowd into parting with their money right there. On more than one occasion, guests are believed to have complained to their hosts that they are not comfortable having this lady around at social gatherings for this very reason.

The lady, however, is routinely invited to every significant party and lunch because of the elite company she keeps. She’s very tight friends with the wives of two of Bollywood’s biggest superstars, and at least a few top actresses too. The South Mumbai swish set is unwilling to jeopardise their friendship with the Bollywood Women’s Club by leaving this lady out of their gatherings, and hence continue to invite her despite her bad manners.