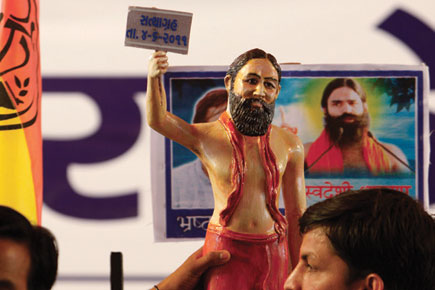 
The Supreme Court has appointed a 13-member Special Investigation Team (SIT) to help recover unaccounted-for money—‘black money’ in common parlance—stashed away in foreign havens. Is this a case of judicial overreach? Some Doubting Thomases say so. But the vast majority of Indians are pleased and endorse this decision of the country’s highest court of law.

The incumbent UPA II Government should be ashamed that the SC has to intervene so often in its exalted parlour of governance. With such a slap in their face, the managers of any institution that values its honour would have quit by now. But this government is too brazen to take such an honourable course.

Take the case of the appointment of the Chief Vigilance Commissioner (CVC). The Home Minister and Prime Minister were on the three- member CVC selection committee, and they were seen favouring a corrupt person like PG Thomas for this august office. Even though the third member opposed the proposal, the two of them were shamelessly adamant. In the end, the SC had to intervene and cancel his appointment.

Did the SC overreach its authority? It can be argued that such appointments are within the Government’s domain, but when the Government forsakes its duty, what recourse can be sought? The SC has provided the way out. And the common man is elated. If the SC had not allegedly ‘intruded’ into the reserved domain of so-called governance, would Mr A Raja and Ms Kanimozhi have been in Tihar jail? Would this government ever have thought of uncovering the shady deals of these supposedly respectable dignitaries? One of them was a minister in the UPA-II Cabinet, and the other a member of India’s ‘sovereign’ Parliament.

A large number of people, from the top judiciary to the Hazares and Ramdevs of India, are agitated by the existence of black money in huge amounts. Those guilty of it belong to a tribe of ‘thugs’. But a high functionary of the ruling party calls Ramdev a thug! No, a ‘mahathug’. And what did this government do to silence this ‘mahathug’? In the dead of night, its law-enforcement machinery pounced on a hapless crowd of thousands of men, women and children gathered to support that man. Now, after the SC order, Ramdev must be having the last laugh.

The SC did not mince its words in condemning the Government’s lethargy: ‘Unaccounted monies,  especially large sums held by nationals and entities with a legal presence in the nation, in banks abroad, especially in tax havens and in jurisdictions with a known history of silence [on the] sources of monies, clearly indicate a compromise of the ability of the State to manage its affairs in consonance with what is required from a constitutional perspective.’

The SC further observes: ‘We are of the firm opinion that in these matters, fragmentation of government and expertise and knowledge, across many departments, agencies and across various jurisdictions, both within the country and across the globe, is a serious impediment to the conduct of a proper investigation… It is necessary to create a body that coordinates, directs, and, where necessary, orders timely and urgent action by various institutions of the State.’

The apex court is conscious of the difficulties involved in this. Therefore, it candidly admits that bringing black money back from abroad depends on several factors that may not be within the Government’s power. But the SC has condemned the Government in no uncertain terms for not even attempting to do what is within its authority.

True, the Government had appointed a high-level committee to address the issue of black money. But it appears this was just a ruse to silence critics. By authoritative reports, the Government has the identities of 18 individuals or entities with secret accounts in a european bank. Why have no ‘show cause’ notices been issued to them? Why does it not disclose the names—at least in cases where it says the investigation is complete?

The Centre’s silence only makes people wonder if the secrecy is because those names are of people dear to the ruling party. Who is to blame if people entertain such suspicions?

This government has lost the confidence of the people. It is better for it and the country if it quits at the earliest. Let the UPA-II dissolve Parliament and seek a fresh mandate from voters. Will it dare do it? Or will it require more time to make ‘adjustments’ for the black money of its supporters and other beloveds?

Many lay people, like me, are ignorant of the niceties and nuances of the Indian Constitution, and therefore may not be able to judge whether or not this is a case of judicial overreach. But such people form a majority in India, and they find the SC verdict both timely and laudable.