A Political History of Hygiene 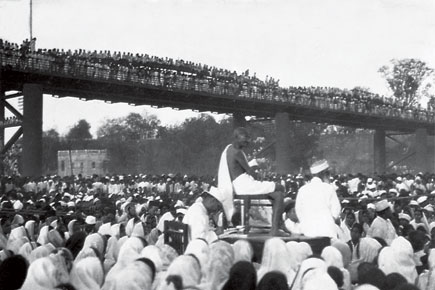 Sabarmati Ashram in Ahmedabad is the starting point of many an Indian legend. Mahatma Gandhi began his famous march to Dandi in 1930 to break British India’s salt law from here. Less known are Gandhi’s ‘experiments’ with public hygiene and cleanliness that, too, were begun at Sabarmati. In one equally famous episode, Kasturba Gandhi rebelled against her husband’s insistence on cleaning toilets. Soon, she acquiesced to his wishes. In any case, campaigns for cleanliness became a part of the Gandhian idea of a new India.

Close to seven decades after Gandhi’s assassination, his ashram continues in its pristine state. Even if one ignores the orderliness that accompanies museums, much of Sabarmati Ashram has remained untouched by time. From the sandy soil in front of Gandhi and Kasturba’s cottage to the hut where Vinoba Bhave lived; from the prayer areas to the guest house where visitors stayed, one could almost say that time has come to a halt. Perhaps this is how Gandhi—one of the staunchest traditionalists India ever produced—would have wanted things to be. After all, his dream of India was that of the timeless village.

It is, however, safe to say that the one matter where he wanted change, things have not changed much or even if they have, the pace has been glacial. Gandhi’s campaign for cleanliness—particularly his efforts to end manual scavenging— is now a legend at par with his other ideas.

This part of the Gandhian story is tucked away in a less-visited part of Sabarmati Ashram that’s hidden from tourist eyes. The Safai Vidyalaya, an offshoot of the Harijan Sevak Sangh, was set up in 1963 to further the campaign to end manual scavenging. Over the years, it has helped build more than 500,000 toilets in Gujarat. But more ambitious goals, such as ending open defecation, have remained elusive.

Perhaps it is an exaggeration to say that despondency has set in among Gandhians. But that is the mood when Dhirubhai Purabia sombrely claims that “sometimes, mere suasion does not work. Sometimes implementing tough laws is also a part of the solution.” Dhirubhai, the secretary of the Vidyalaya, is a former teacher who has seen campaigns for cleanliness for over 40 years. The matter is delicate and he shies away from the topic as he gives a tour of the Vidyalaya’s museum of toilets. For an institution championing an idea with Indian ambitions, the Vidyalaya has remained confined to Gujarat, and even there it has seen a flagging of its energy over time.

What Dhirubhai hesitates from stating clearly, statistics say bluntly. When it comes to open defecation, India is the filthiest country in the world. According to the ‘Progress on Drinking Water and Sanitation’ update by WHO and Unicef, in 2014, of the one billion people practicing open defecation in the world, 597 million were to be found in India. The country next on the list, Indonesia, has a number 11 times less than India’s. This is not where India’s cleanliness problem ends. The country also has a huge number of slums that pockmark its urban landscape. Of the 4,041 towns, 2,543 reported slums (2011 Census). The problem is so acute that the Census even has categories of slums—notified, recognised and identified—each with its hierarchy of rights. There are even laws dealing with slums. One of the first laws on the subject— The Slum Areas (Improvement and Clearance) Act— was enacted in 1956. But this has been to no avail. Since independence, the number of slums has increased. Today, of the 78 million households living in urban India, 13.7 million live in slums (17.4 per cent of the total).

Both numbers—slums and open defecation–should be seen in perspective: in 2011 India had a population of 1.2 billion people. If slums are an urban phenomenon, open defecation has a rural edge. The scale of the problem makes it unique.

How have other countries handled these issues? Is there anything for India to learn from the global experience? The best example of getting a country clean is Singapore. From installing urine detectors in elevators to monitoring the number of times a toilet was flushed at one stage, this city- state put the fear of law in its citizens. One good example of this attitude is the Vandalism Act of 1966. This law prescribes corporal punishment for damaging public and private property— that includes defacing, writing, drawing, affixing of placards. One of the punishments meted out to violators was caning, something the city-state has never hesitated from handing out. At one point in its history, chewing gum was banned in Singapore. Littering in public spaces attracts heavy fines. The net result of these coercive measures has been a behavioural change among Singapore’s citizens. The country is now famous for its cleanliness.

Elsewhere, in Britain and Europe, steady progress in education and advances in public health have ensured the disappearance of issues related to hygiene. For the lack of a better expression, this is an evolutionary approach to a vexed matter.

For various reasons, India defies either solution. Evolutionary approaches— and Gandhian suasion falls in this class—have not worked to the point that even Gandhian’s despair for it. Coercion, even of mild varieties, has led to a backlash. This leaves India, its citizens and governments alike, in a confused—almost dejected—spot. What has been the record so far?

“I think we are a long way away from ending open defecation,” says Biju Dominic, the chief executive officer of Final Mile Consulting, a firm that uses insights from behavioural economics to change public behaviour. In Delhi’s Sanjay Gandhi Nagar, these consultants have launched a project under which simple solutions— such as making a designated spot for collecting refuse and trying incentives to make people use it—are being tried. There has been some success. “The matter is complicated. In India, even the poor have awareness of the importance of cleanliness and they keep their personal space clean and ordered. The trouble is that there is a public-private split in people’s perception and they associate the responsibility of keeping public spaces clean with the government,” says Dominic.

A further complexity is cultural. For example, studies by the Research Institute for Compassionate Economics (RICE)—a non-profit research organisation—found that, ‘Many people prefer open defecation to regular latrine use: half of people who defecate in the open say that they do so because it is pleasurable, comfortable and convenient.’ A similar theme is echoed by Dominic who says that in a study of open defecation in Karnataka, people argued that it is better to relieve themselves outside than in a home as they felt that doing so in a place with a kitchen close by was polluting.

The result is one big mess. A cultural attribute cannot be changed quickly, as the fate of the Gandhian campaign shows. Clearing slums has another dimension: in India, any approach that clears squatting in public spaces is quickly dubbed ‘anti-democratic’. The efforts to clear railway property from encroachment in Delhi’s Shakurbasti by the Union Government led to an uproar in Parliament and a judicial rapping for the Indian Railways.

But as in much else, there is needless pessimism. The example of Singapore shows that even if people are culturally attuned to unclean behaviour, one need not wait for an evolutionary change to take place. Now no government in India can, or should, get into people’s toilets. But surely public littering and open defecation in urban areas can be punished? Similarly, squatting and encroaching on public property is not an attribute of democracy anywhere; but in India, democracy is a post-facto rationalisation for encroachments: the Government does not issue advertisements against it.

These are not easy problems to sort out. For example, in India’s extremely competitive political space, any effort to clear encroachments is likely to lead to other political parties championing the cause of the ‘poor and downtrodden’. In Delhi, to give one example, election-eve ‘regularisation’ of slums without devoting resources to basic services has permanently disfigured its urban landscape. At one time, when the Congress tried to clear an urban space during the Emergency—the infamous Turkman Gate anti-encroachment drive in 1976—the party had to pay a high political price.

Here again, it is not as if nothing can be done. The development of the Sabarmati river front in Ahmedabad— first mooted in the early 1960s—is a good example of what a willing state government can do. Launched in 1997, the project took 15 years of judicial challenges, resettlement of thousands of slum squatters—unwilling to move—and a huge pile of money. But the net result is visible: the Sabarmati, effectively a dead river, has been dredged clean. Now, water of the Narmada flows through it. While the project is yet to be completed, the river front area is justifiably a place of pride in Ahmedabad.

There is probably more hope on this front than on tackling open defecation in rural India. As India urbanises, people will demand better civic services and willing governments can cut a deal with people living in these areas: keep the place clean and get services in return. Ensuring public hygiene in urban areas also stands a better chance even if the end-goal is still distant. School education—private and public—always places great emphasis on cleanliness. The trouble is that in India, awareness seldom translates into action. But advances in behavioural science now offer an insight into how humans think and this promises much better designed interventions to help people understand and end this practice. On the supply-side, efforts such as the Swachh Bharat mission may end up delivering what India needs. The architecture of this partnership needs careful thinking and offering of well-designed incentives. What needs to be kept away are faux notions of democracy and what it entails. A cleaner India is a distant but not an impossible dream.

As the sun sets on Sabarmati Ashram, the only lights that remain visible are in Gandhi’s cottage and those in the museum. Soon, the place is dark. But on the other side of the Sabarmati, there is a bright glow of lights. If the ashram is experiencing nightfall, the river front park is lit up brightly and is full of people taking a stroll. Perhaps this is also the fate of the two approaches that have marked efforts to clean up India. Moral suasion and efforts to make people see the importance of keeping their environment clean have seen little success. Perhaps it is time to try something else without worrying too much. Other countries have tried that and seen it work. There is a good chance that this may click in India as well.