Will the vagaries of English weather harm the Indian quest for shooting medals? 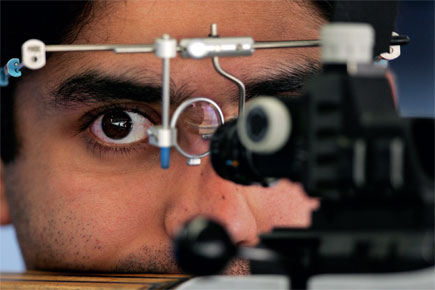 Will the vagaries of English weather harm the Indian quest for shooting medals?


The fickle English weather can change faster than the time it takes a shooter to take his stance, line up a shot and pull the trigger. The Indian cricket team can list numerous tales of the weather making or marring their chances of victory on English soil. But even India’s shooters will be praying for some consistency this English summer.

The shooting contingent is seen as India’s best medal hope in the 2012 London Olympic Games to be held from 27 July to 18 August. After all, it was Rajyavardhan Singh Rathore who won India’s maiden individual silver at the 2004 Athens Games. And four years ago in Beijing, Abhinav Bindra became India’s first individual gold medallist.

Normally, it is the shot gun events that are affected by changing weather conditions and wind speed, as they are held in open air. But in London, even the air gun contestants, accustomed to shooting indoor, could suffer some exposure to the elements in the temporary structure erected for the Games. It will be made of PVC sheets, and this is the first time that the Olympics shooting competition will be held like this. British law does not permit private citizens to own handguns, and indoor shooting is not popular. Constructing a concrete indoor range would have been a waste of money for the organisers.

In Beijing and Athens, the 10m ranges were temperature-controlled. Though the 25m and 50m ranges were open, in accordance with international norms, the wind was at least consistent. In London, however, the makeshift range has been put up at the historic Royal Artillery Barracks in Woolwich, which, being more of an open ground, would be that much more vulnerable to windy conditions. “Since it is a PVC structure, there are no doors. When wind blows, it also enters the arena,” says pistol shooter Rahi Sarnobat, who will represent India in the 25m pistol event.

Rifle shooters have their custom-made jackets and trousers to count on. They wear these mainly to protect their shoulders from the recoil of the gun, but it also serves to keep them warm in chilly weather. Pistol shooters don’t need such protective gear, but this means that they may feel cold. They can always carry jackets along for warmth, but they prefer to shoot without these because the extra padding also means extra weight.

“The worst part about English weather is you don’t know when you should go out in just a T-shirt and when you should carry a sweater and other warm clothes,” says Sarnobat, who finished ninth at the International Shooting Sport Federation World Cup in London this April. It was a trial event for the Games.

When the Indian team went to London for the ISSF World Cup, it was snowing in England. This left the players shivering during the competition. “It was so cold that Abhinav (Bindra) and Gagan (Narang) turned red,” recalls national coach Sunny Thomas, “The venue does not have a thermostat and, hence, everyone is at the mercy of the temperature.” It was only after the contestants protested that the organisers sealed all but one entrance to the arena.

At the World Cup, both Bindra and Narang failed to make it to the 10m air rifle finals. Narang was also well below par in the 50m 3-position event. Even world No 1 Zhu Qinan of China had to go through a shoot-off—with eight others, including the Indian duo—to qualify for the 10m Air Rifle finals. He could only manage an eighth place finish, as Europeans took all the honours.

However, the coaching staff would rather not read too much in these results. The Indian contingent was nowhere near its peak and had gone to the World Cup mainly to get a better understanding of conditions at the venue.

Thomas says that the conditions would also be different in July. The temperature would be relatively moderate. “It won’t be that cold when we go there for the Olympics,” he says, “and I am sure our shooters will be more comfortable.”

The team’s mental conditioning expert Vaibhav Agashe, a former CBI officer, says that the unit has worked on putting that trial experience behind it. “It is always difficult to forget a past struggle at a particular venue,” he says, “It was the cold that affected our players and since it would not be that cold during the Olympics, we have worked on instilling that belief in our players.”

But while it may not be all that chilly, rain is always a threat. According to Agashe, the real challenge would be to keep the shooters’ spirits high if it’s rainy. “Normally a person feels lazy under such conditions, so the player has to make an extra effort to stay pumped up,” he says, “But our players should handle this situation better than most because they are used to training during rains even in India.”

July and August are usually London’s warmest months. But there can be plenty of rain, and the temperature can fluctuate if it is accompanied by breeze. The British meteorological department has announced that this year saw the isles’ coldest April since 1989. And April to June has been the wettest second quarter in the UK for over a century.

When this is mentioned, Thomas says, “It is very difficult to predict weather conditions in London. By the rules of the competition, once an event starts, it has to be completed even if it starts raining. That can affect the 50m events, but then the conditions would be the same for all competitors, and I am confident that our shooters can cope with them.”

The weather may play truant, but Indian shooters do have some support by way of equipment. Their kits will have different kinds of lenses with their aiming glasses for better visibility in low light or windy conditions.

Besides, the team is in the process of acclimatising itself the best it can. Some Indian shooters will train for a fortnight in Hanover, Germany. The 25m pistol squad will travel further to Brauns-chweig, 70 km from Hanover, for open-range training. The likes of Bindra, Heena Sidhu and Joydeep Karmakar have been in Germany for over a month now. The entire squad will assemble in England on 21 July and get about eight days to practise at the competition venue.

Indian shooters have spared no effort—or jacket that can be tried on—in preparing for the London Games. They are determined to take their best shot when they line up at the Royal Artillery Barracks. All they want is some cooperation from the weather.