Cricket will miss one of its most beautiful yet intimidating sights 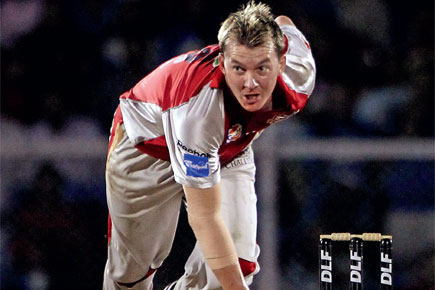 Cricket will miss one of its most beautiful yet intimidating sights


One night in October 2004, Brett Lee was at the beachside Vie Lounge and Deck restobar in Juhu, Mumbai. It was the 150th anniversary of a watch brand Lee endorsed. Aquaflow, an Indian band, was providing the musical entertainment for the evening. As expected, they soon had a new, temporary member. Lee, a competent musician, went up on stage, slung a guitar over his shoulder and contributed to five songs.

You wouldn’t have been able to tell that Lee was smarting from a cricketing rejection at the time. Australia were in India for the Border-Gavaskar Trophy, one of the five great chapters of the Trophy the two sides played over 2001-08. But Lee was not in the team. Mich- ael Kasprowicz was in better form. So he got picked. Lee was stung enough to do something relatively uncommon—meet the selectors to understand the reason for his exclusion and ask them what he had to do to break back into the team.

That evening captured the essence of Lee. He was a hardnosed professional, serious about every small detail of his cricket (at one point his run-up was a precise 21 metres and 30 centimetres). At the same time he was someone who could also put his worries aside and pursue his hobbies. This ability made Lee one of the interesting cricketers of his time. On the field and off it, he went through much, but he didn’t show it. He got injured so frequently that he said he had “more sequels or comebacks than Rambo.” His marriage ended at a most agonising time, soon after the birth of his son. And yet he retained his enthusiasm for cricket and his other passions—chiefly music and Bollywood.

Lee was also blessed with a smile that was almost permanent. Immigration officers would have waved him through without too many questions even if he wasn’t a celebrity. Most of us smile occasionally and go back to a neutral expression. Lee sported neutral or agitated expressions occasionally and went back to smiling. He was smiling even when he announced his retirement from international cricket the other day in Sydney.

The mention of Lee the cricketer evokes two images more than others. One is his ‘chainsaw celebration’ after a wicket—a somewhat violent gesture for an otherwise genial man. Lee would lean forward, and as if bashing some invisible bloke lying on the ground, pump his right arm vigorously. The other, and more important, is his smooth bowling action and the speed with which he bowled. Lee is one of the reasons—the other being Shoaib Akhtar—that the year 1999 is special to cricket fans. Both made their debut that year. The sport, always on the lookout for genuine pace bowlers, now had two monsters who could pop the ball around at 150 kmph or above.

The rules of cricket are weighed in favour of batsmen. Yet, raw pace still unsettles batsmen. Lee had that. Yuvraj Singh tweeted that his favourite Lee moment was when ‘Binga’ was bowling at 155 kmph against India in the 2004 VB Series in Perth, prompting wicket-keeper Adam Gilchrist to stand on the 30-yard circle.

Lee’s great achievement was that he carved an identity for himself in a side loaded with Hall of Famers and in a side that is among the greatest ever in cricket. Despite his injuries, he battled on to finish as Australia’s fourth highest wicket-taker in Tests, play a part in three Ashes wins and two series wins against India. In ODIs, Lee was an even more effective bowler. The most valuable reward of his one-day expertise was the 2003 World Cup, which Australia won and where Lee was the second highest wicket-taker with 22 strikes.

Lee was also a capable batsman, and this led to one of modern cricket’s poignant memories, a moment loaded with the meaning of sport. Some months after that evening in Juhu, when Kasprowicz had kept Lee out of the Test side, the two were together at the crease in Birmin- gham, as tailenders, trying to win the second Test of the 2005 Ashes series. They had put on 59 for the last wicket. Lee had scored most of the runs, despite taking several blows on his body from Andrew Flintoff and Co. With Australia three runs from a thrilling win, Kasprowicz got out. Lee consoled his teammate, and Flintoff, who moments ago was hurling missiles at Lee, consoled his rival. Binga, for once, found it hard to smile.