The Most Important Non-Players at the World Cup 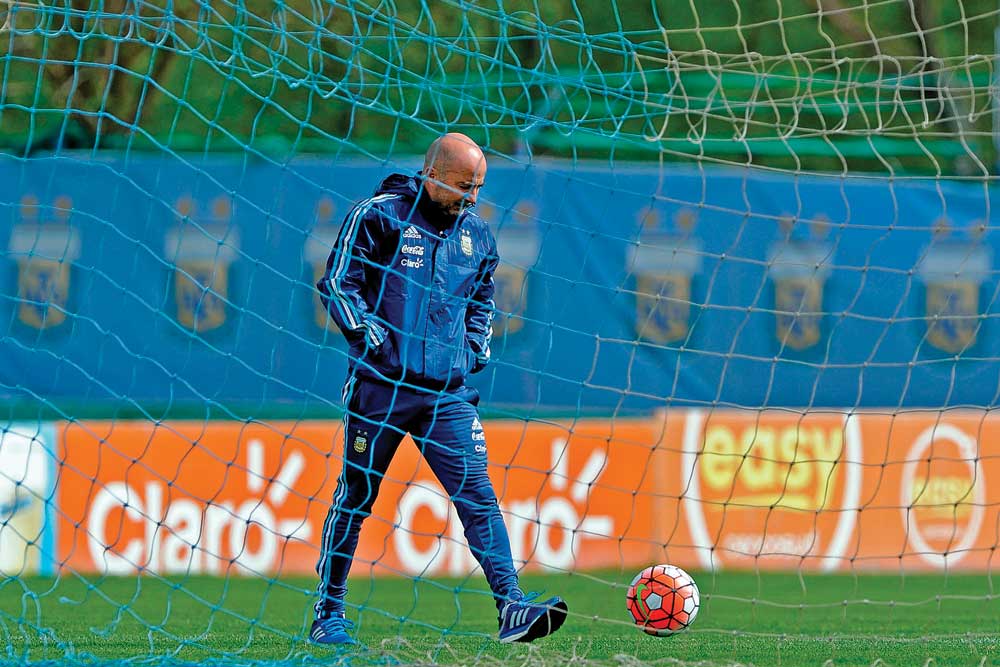 FATE, SOMETIMES TO an even greater extent than tactical acumen, controls the lives of international football managers—the 32 most important non-playing men at a World Cup. From the sideline, these frowning faces in expensive suits will coax, hiss, guide and berate their players towards the opposition’s box, towards the crucial end of Russia 2018 and, hopefully, towards the Jules Rimet trophy itself. For Argentina (and hence, Lionel Messi), that man is Jorge Sampaoli— a sun-kissed, attack-minded quinquagenarian, around whose perfectly bald head is said to sit an aura of genius; vouched for not just by Argentines but every football fan in Latin America.

But it was fate (the puppeteer who plays chess with two queens, according to Terry Pratchett) that put Sampaoli in charge of his country’s dreams and Messi’s legacy, in turn causing a cascading effect on the fates of several other managers around the world, many of whom are present at this World Cup thanks to this incredible chain reaction.

On a fateful day in September 1995, Sampaoli, a small-time coach of a small-time amateur club called Atletico Belgrano de Arequito in the outskirts of his hometown of Rosario, lost his cool with a match official. When the official evicted the screaming manager from the ground for misconduct, he would’ve expected Sampaoli to walk back to his car and drive home to Rosario. Only, Sampaoli found a tree just beyond the premise, climbed on to a branch with a view of the ground and began screaming instructions to his players from there—much to the shock of the official and the amusement of a newspaper photographer who happened to be passing by.

According to the myth, the only words of Sampaoli audible from the vantage of his tree were high-pitched pleas of ‘contra- ataque’, or counter-attack. The tree-perched Sampaoli wasn’t visible to his players either, but it didn’t matter. His photograph, snapped by Sergio Toriggino and published in La Capital de Rosario, was seen by everyone in Rosario, earning him more than just his 15 minutes of newspaper fame. The newspaper was also read by Eduardo Lopez, president of Rosario’s premier club, Newell’s Old Boys.

Lopez was impressed enough with the photograph, and the passion the picture exuded, that he instantly pulled Sampaoli out of obscurity by offering him a coaching role with Argentino, a feeder team to Old Boys. This was an offer he couldn’t turn down, for Newell’s Old Boys was managed by Sampaoli’s hero, Marco Bielsa. The story goes that Sampaoli used to tape Bielsa’s radio interviews and play it over and over again until he could recite his guru’s philosophies verbatim. Now, thanks to fate and a photograph, he had an invitation to share workspace with his idol.

“Lopez saw that photograph and called me to manage Argentino. Everything started with that,” Sampaoli is quoted as saying in a recent interview. “Since then I have not stopped managing.” With his hyper-aggressive mantra, Sampaoli earned a reputation for fearless football, which was misconstrued by Argentines for a devil-may-care attitude. So he cut his teeth in the smaller leagues around South America, polishing his full-press skills (3-3-1-3, in formation shorthand) in Peruvian and Chilean club football. After filling club Universidad de Chile’s cabinet with a shelf full of trophies, Sampaoli was given the reins of Chilean football (his first national team) in 2012, saddled with the instruction of taking Chile to the 2014 World Cup in Brazil. Sampaoli did better than simply help Chile qualify.

In the pre-quarters of Brazil 2014, Sampaoli’s team was a coat of varnish away from knocking the hosts out of the tournament. Had striker Mauricio Pinilla’s 88th minute shot flown half-an-inch lower, Chile would’ve made the quarters and Sampaoli would’ve been a shoe-in to replace Argentina coach Alejandro Sabella at the end of the tournament. Instead, the ball crashed against the base of the crossbar, the prodigal son remained away from home, in Chile, where he would lead the country to its finest footballing hour the following year, against Argentina no less.

In the 2015 Copa America, Sampaoli led Chile to their maiden intercontinental title, beating Messi’s Argentina on penalties. There were widespread rumours at this point of Sampaoli replacing Gerardo Martino, Argentina’s then-head coach. But it was an open secret that Martino was close to Messi’s family, so Sampaoli found a greener pasture across the Atlantic, for his first stint as a manager of a big club in Europe, Sevilla.

But before he left, Sampaoli recommended the Chilean job to another Argentine, Juan Antonio Pizzi, who knew better than to tinker with the philosophical structure Sampaoli had built from ground up. Riding on well-ingrained strategies, Pizzi led Chile to their second Copa America title in 2016, once again beating Martino’s Argentina. Once again on penalties. Messi, unable to handle three consecutive heartbreaks at the finals, retired. And this time Martino was fired.

Some bosses at Russia 2018 may seem not to have participated in the football manager’s version of musical chairs. But claw deep enough and you see their connection

While Sampaoli was busy dragging back Sevilla into the Champions League after a four-year hiatus, Pizzi failed to navigate the greatest ever Chile team, riding on the success of back-to-back Copa America titles, through the World Cup qualifiers and was sacked. But just when Pizzi’s dream of managing a team in Russia seemed buried, others, elsewhere around the world, lent him a few helping palms.

Two weeks after Ange Postecoglou secured his native Australia’s qualification for Russia, he resigned, claiming his job had taken a ‘personal and professional toll’ on him. Postecoglou’s spot as manager of Socceroos was filled up by the Dutchman Bert van Marwijk, who had helped Saudi Arabia qualify for this World Cup after an absence of 12 years.

Van Marwijk, who once took Holland all the way to the final of the 2010 World Cup, was disappointed with the way Saudi Arabia’s football association had treated him and his coaching staff despite what he had achieved, so he quit in January 2018. He was replaced, temporarily, by the man who failed to take the United Arab Emirates to Russia, Edgardo Bauza. Bauza too is an Argentine, whose ebb and flow as an international manager seem eternally entwined with those of Sampaoli and Pizzi.

A quick backstory. The aftermath of Pizzi’s Chile defeating Martino’s Argentina in the final of the Copa America Centenario in 2016 resulted in Bauza being named as the new Argentina coach. A Messi-less Argentina (remember he had retired?) was always going to be a challenge, and after just eight World Cup qualifier matches, in which the Albiceleste ranged from poor to pathetic, Bauza was sacked and Sampaoli was given a long-awaited call-up.

“I’ve had this dream as a boy,” an emotional Sampaoli said, quitting Sevilla half-way through his contract. “I cannot turn this down. Even if this means I may not have the opportunity to coach again at European clubs, I feel I have to do this.” Even as Sampaoli turned around Argentina’s qualifying fortunes (with Messi choosing to return in the nick of time), Bauza looked to find a team he could call home at the 2018 World Cup. He failed with the UAE and caught a break with a qualified Saudi Arabia, where, as we know, van Marwijk had been expelled and had replaced Postecoglou at Australia. But after being in charge of Saudi Arabia for just five friendlies in2018, Bauza was shown the door. And in walked Pizzi, the man responsible for the start of Bauza’s international managerial career and also its end.

AT THE SURFACE, some bosses present at Russia 18 may seem not to have participated in the football manager’s version of musical chairs. But claw deep enough and you begin to see their connection with the cosmic swirl. Take Colombia’s Jose Pekerman for example. The country’s one-man coaching institution took Colombia all the way to the quarterfinal of the 2014 World Cup, where they narrowly lost to hosts Brazil. For this, and his outstanding contribution to a football-manic country, Pekerman was given Colombian citizenship —a day he called the proudest of his life, a day he let go of his Argentinian past.

As an Argentine and the head coach of Argentina at the 2006 World Cup, Pekerman experienced perhaps the worst day of his life. Not only did Argentina lose the quarterfinal to hosts Germany, Pekerman alone was blamed for the loss. Why? Because for a reason yet to be comprehended, Pekerman decided to not feature Messi in the starting eleven; and neither was he brought on as a substitute. Argentina lost on penalties and Pekerman knew he wouldn’t be pardoned by the country of his birth.

That day in Berlin, as Pekerman’s head drooped in shame, Germany’s Joachim Loew—then an assistant to head coach Jurgen Klinsmann—got his first taste of victory at the knockout stages of a World Cup. In his 12-year uninterrupted reign as Germany’s top boss (the longest serving international manager in the game today), Loew has caused his fair share of shake-ups; most significantly with the Brazilians. On Germany’s road to victory in Brazil 2014, Loew made the five-time winners rethink the fundamentals of their football with a 7-1 massacre in the semi-finals.

Had Sampaoli’s Chile or Pekerman’s Colombia beaten Brazil in the pre-quarters and quarters of the 2014 edition respectively, as they had threatened to, Luis Felipe Scolari may still have been Brazil’s head coach. But Loew’s devastation opened a country’s eyes to how far the ball had fallen from the field. Scolari went, weeping, and the ultra-defensive Dunga returned from the wilderness, frowning. So keen was Dunga to avoid future 7-1s that he took Brazil down a path he would’ve otherwise shuddered to go; the faith-keepers of the beautiful game had become 11 Dungas—dull, drab and defensive.

Dunga was sacked as soon as a nation awakened and in came, frolicking, the antithesis to Dunga, Tite. Tite’s Brazil breezed through the World Cup qualifiers in record time, as he urged his players to burst across the field in mesmeric triangles. His tactics are altogether unique; it is both a nod to Brazil’s romantic past and a handshake with the current times of possession-football.

Long shackled, the soul of Brazilian football is said to have been freed by Tite, a man widely considered to be a reincarnation of Tele Santana, the inimitable coach of Brazil’s 1982 campaign. Before Tite, only one man in all of South America came close to being compared with Santana; in Argentina he is known as El Loco, or the Mad One. His name is Marco Bielsa, Sampaoli’s spiritual guide in life and football.