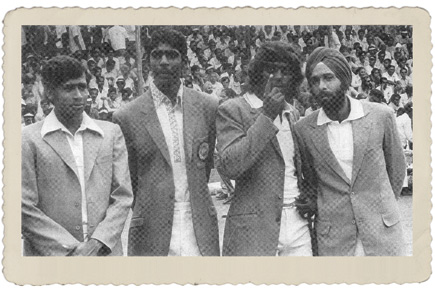 India boycotted the 1974 Davis Cup final as the host nation was under apartheid rule. Here’s the match that never happened.


Anand Amritraj should have been on top of the world. He travelled the globe, had his pick of women to date, and made a handsome living playing tennis, a sport that he loved. Amritraj was the second best player in the world’s second largest country, but he was also the second best player in his own family, a distinction which would serve as both a curse and an inspiration.

This month marks the thirty-five-year anniversary of the most important match in tennis history never to be played. In 1974, South Africa and India crashed tennis’ most exclusive party—the Davis Cup—which had never been won by any country outside the sport’s Big Four: the US, UK, France and Australia. The feel-good story of two countries from the developing world making it to the Davis Cup Final had no happy ending, however, as the Indian Government forced the team to boycott the final in protest of South Africa’s apartheid government. The players have had years to consider the merits of this decision; some have now come to peace with it, while others still believe that India made a colossal error in placing political principle before potential sporting glory.

The story of India’s surprising run to the 1974 Davis Cup Final revolves around two brothers, and their teammates, who were both supporters and rivals. Vijay Amritraj, then 20, and his brother Anand, 22, were India’s top two players, but Anand’s confidence had been flagging just as his brother’s career began to take off. “I was always better than Vijay growing up,” Anand remembers. “Then in 73 he had a breakout year, and I was left in the dust. I was so used to being number one in the family; it took me a long time to get over the fact that he was just more talented. Eventually, though, Vijay became just another player that was better than me.”

India’s first real test in the 1974 Davis Cup campaign came in the quarterfinals against Australia, the Cup’s defending champions, who had crushed the United States in the 1973 final. Despite two lopsided losses to Australia in 1972 and 1973, a hopeful buzz filled Calcutta’s South Club and the neighbouring rooftops that were crammed with fans angling for a free view of India’s 10 May encounter with the lads from Down Under. India’s legendary captain, Ramanathan Krishnan, chose Jasjit Singh, who became the first Sikh to play the Davis Cup for India, rather than Anand Amritraj for the tie’s second singles spot.

Anand felt slighted in losing the No2 singles slot, but Singh, who is now a consultant living in New York, produced some inspired tennis to beat Australia’s Bob Giltinan, 11-9, 9-11, 12-10, 8-6, in a marathon opening match. Australia’s John Alexander beat both Vijay and Singh in their singles rubbers, while Vijay and Anand won what might have been the most arduous doubles match in Davis Cup history, 17-15, 6-8, 6-3, 16-18, 6-4. With the score knotted at 2-2, India’s hopes rested on Vijay, who rose to the occasion, clinching the tie with a 6-1, 5-7, 6-4, 6-4 thumping of Bob Giltinan that inspired the delirious crowd to sweep the victor off his feet and carry him off the court.

The victory over Australia, which still stands as the longest tie in Davis Cup history with 329 games played, turned the Indian players into national heroes overnight. “My parents did get marriage proposals after the match,” recalls Sashi Menon, who was a reserve in 1974, but went on to a distinguished Davis Cup career for India, “but I found a way to shut that down very quickly.”

With a spot in the Davis Cup Final on the line, Krishnan chose to rest the hopes of the nation on the Amritraj family, restoring Anand to his No2 singles slot for the semifinal battle against the Soviet Union, much to the consternation of Singh and Menon. “Vijay pushed for his brother,” remembers Menon. “Unfortunately it got to the point where if Anand didn’t play (singles), then he didn’t want to play.” Amritraj was, however, ahead of both men in the rankings, and Krishnan denies being pressured by Vijay. “There was never pressure on me to pick Anand,” Krishnan says. “I made the decisions only with the best interests of India in mind.”

Up 2-1 against the Soviet Union, and with a spot in the final hanging in the balance, it was finally Anand’s turn to become the man in the spotlight. Down two sets to one against Teimuraz Kakulia, Amritraj realised that if he lost, his brother Vijay would have to beat Alex Metrveli, who had been a finalist at Wimbledon the previous year.

“My mom came into the locker room at the break, and gave me a little medal with the Virgin Mary’s picture on it,” Anand Amritraj says. “It’s something you give to people when they are about to die, actually.” Anand came back from the dead to win the match. “It was the biggest moment of my life,” he says. “The crowd descended on me and carried me around the court, and I never saw Kakulia for the handshake.” Vijay, who listened to most of the match on a transistor radio in the locker room, had never felt more proud of his older brother. “It was two brothers taking their country to the final, which had never happened,” says Vijay. “It was past the goose bump feeling.”

The party proved to be short-lived, however. South Africa subsequently defeated Italy in the other semi-final, and after weeks of negotiation and rumours that perhaps the match might be played on a neutral ground rather than in South Africa, the Government of India elected to boycott the final. The decision, which all of the Indian players believe came from Prime Minister Indira Gandhi, was a bitter disappointment for the players on both teams.

The boycott did, however, spare South African tennis officials from having to decide how to accommodate what would likely have been an influx of Indian fans living in South Africa. “The crowd at Ellis Park would have been segregated with just a very small section near the top reserved for non-Whites,” says Sy Lerman, a South African journalist who covered tennis in 1974 for The Daily Mail.

Would South African officials have allowed an overflow crowd of Indian fans supporting the visiting team to sit amongst Whites? Might they have relegated associates of the Indian team to the non-White section? “That would have been a ludicrous chance for us to take,” Vijay Amritraj says.

The South African players opposed apartheid, but had differing views on whether sport should be separated from politics. Cliff Drysdale, who was the top ranked South African player and went on to become a founding member of the ATP, publicly opposed apartheid and decided to leave the team and renounce his South African citizenship after playing just one Davis Cup match in 1974. Raymond Moore, nicknamed ‘Hippy’ for his long hair and anti-establishment views, was an open critic of the minority rule government, while Bob Hewitt and Frew McMillan, who played doubles for South Africa and were inducted into the Tennis Hall of Fame in 1992, never commented on politics.

Opinions also vary on whether the Indian Government was justified in forcing the team to boycott the tie. “At the end of the day, the Indian Government was right,” Moore says. “If more countries had boycotted South Africa, maybe apartheid would have crashed down sooner.” Frew McMillan, who now lives in England and does tennis commentary for Eurosport, believes that India took the “worst possible” course of action. “I don’t think it accelerated the demise (of apartheid),” he says. “Giving their players a chance to win the Davis Cup would have done more for India.”

The Indian team is no less divided on the boycott decision. “I think it was a bad call,” says Anand Amritraj. “The only time we had an excellent chance of winning the Davis Cup, we gave it away. And it didn’t really change anything.” Vijay Amritraj contends that the Indian Government made the right move, and “took pride” in India’s “right call”. Sashi Menon, who now lives in California and has his own investment advisory company, has mixed feelings. “From a tennis point of view, it was a bad decision,” he says. “As a political decision, I suppose it was the right thing to do, but I’m a sportsman and I wanted to fight my battles on the court.”

Thirty-five years after the boycott, both teams are united on a single issue: the conviction that their teams would have won. Bob Hewitt remembers the good natured, yet deadly serious debate over the lost cup. “We told the Amritraj brothers at that time, ‘the only reason you guys didn’t play us is because you were chicken.’” he says. Raymond Moore, who now lives in California and is the co-director of the Indian Wells tennis tournament, has a similar view. “I felt then and I feel now that we would absolutely have beaten them.” When told of the South African players’ conviction that they would have won the tie, Anand Amritraj, who owns a tennis club in Long Island, NY, was incredulous. “I think they’re delusional. We would have won 4-1.” His brother Vijay concurs. Ramanathan Krishnan, India’s Davis Cup captain, acknowledges that South Africa would have been the favourites, but points to India’s 2009 Davis Cup victory in South Africa as a source of pride. “If the South Africans are saying they would have won in 74,” he says, “tell them that we won it in 2009.”

The biggest news of the 2009 Davis Cup season once again revolved around mixing politics and tennis. Sweden and Israel played a Davis Cup tie in March in an empty arena after Swedish officials feared violent anti-Israel protests.

The 1974 Davis Cup is viewed as a lost opportunity by the men who would have played in it; South Africa never made it to another final, and India still hasn’t won the tournament. “It was an empty victory,” Moore says, summing up the feelings of the team. Of the eight players who competed on the Davis Cup squads for India and South Africa in 1974, only one, Bob Hewitt, who was born in Australia and is now a citrus farmer, still lives in the country he played for. Despite the distance, however, all of the Indian players remain deeply connected to their homeland, and the Amritraj brothers have been instrumental in the development of the sport in India.

With both teams equally certain that they would have won the only Davis Cup Final never played, are the players prepared to settle the matter now, on the court, thirty-five years late and without the weight of politics? “Absolutely not,” says Vijay Amritraj, who lives in California. “The court is too big, the net is too far away, and there are too many people on the other side.”

Many of the players are game, however, so long as the matches would benefit a worthwhile charity. “If we played now, I’d play No1 singles for India, because Vijay is out of shape,” says Anand Amritraj, who has finally reclaimed his role as the best tennis player in his family.