When crowd support in England is with India, it’s not just that the home team has lost its notional home advantage. It rankles at some deeper level 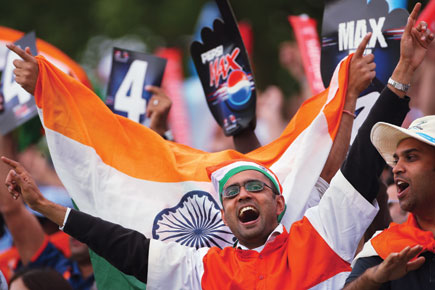 When crowd support in England is with India, it’s not just that the home team has lost its notional home advantage. It rankles at some deeper level


The setting was the home of English cricket—Lord’s. India were playing England in the second edition of the world T20 on 14 June 2009. Lord’s, as is the norm these days at most venues where India plays, was awash in a sea of light blue (England too wear blue but a darker hue). It did not stop here. Just as Paul Collingwood’s side came out for a pre-match warm-up at the Nursery Ground just behind the media centre, they were booed and jeered by a section of the crowd. England, the home team, were booed at the home of English cricket. The home advantage had been surrendered and the significance of the act was not lost on the English captain, who mentioned at the post-match conference that his side was hurt at such crowd behaviour. With something similar, if not a more aggressive version of this behaviour, expected this time round, the question of fan ethics has popped again, inevitably bringing to mind Norman Tebbit’s ‘cricket test’ of two decades ago. (Tebbit, a Conservative British politician, had advocated this test.) The question: who do British Asians support in cricket? And if they support India in a match against England, do they have the right to identify themselves as British citizens? Also, if they support India, is it an act of betrayal?

British Asian support for India clearly rankles with many and is central to debates on cricket following in England. For this lot, British Asian support for India is unequivocally an act of ‘betrayal’, and they see these Asian communities as ‘the enemy within’. But British Asians I interviewed consider this outcome a logical fallout of the racism they have been subjected to for years. “We have hardly been included in the mainstream of British society. Such marginalisation will inevitably lead to discontent. The cricket field is the best place to manifest it,” said a 21-year-old not willing to be named. They find it unnatural that they will either have to be ‘British’ or ‘Asian’ when it comes to watching cricket and that notions of ‘dual ethnicity’ or ‘cultural hybridity’ are lost on the upper- and middle-class English who continue to cling to quaint notions of Englishness. Most of these British Asians support England when it comes to football. “India is no good at football and we will surely support England. But when it comes to cricket, we know the Indians can provide answers to our suffering, the discrimination we have been subjected to for years. It is only natural we will support India.”

Sections of the Indian community I spoke to at Taunton went a step further. “Why aren’t White South Africans, Australians or New Zealanders subjected to the Tebbit Test? Is it because the colour of their skin prevents them from being identified? Do we know if they support Australia or South Africa or New Zealand when they play England, and if they do, will they be considered traitors as well?” Pertinent questions. They draw attention to problems rooted in the multicultural demographics of the UK. Had these ‘immigrants’ been integrated with the mainstream of British society, who they support in these games would have become a non-issue. But that is not how things stand, and the sense of being second-class citizens is real among large sections of immigrant Asians. On the other hand, for the section of white British middle- and upper-classes ranged on the other side of the debate, it is an article of faith that those who enjoy the benefits of living in Britain (read: immigrants) must support England. Would they feel the same way about a Briton if s/he were to support some other country? Perhaps not. This point of view was borne out by the group of Indian supporters waiting to meet Dhoni and company at Lord’s as they came out for their first net session. “We are always reminded that we are immigrants. We are aware that we are in this country to work and earn a living. In an age of globalisation, our skill sets have allowed us to do so. The upper-class English have done us no favour by giving us jobs. Rather, we are plying our trade here because the locals are lacking in these skills. So, we’ll always behave like migrants who continue to have their roots elsewhere and will support the country of our ancestors.”

On occasion, this accuser-accused dynamic has been turned on its head when a British Asian has ‘crossed the line’. When Sajid Mahmood played for England against Pakistan in 2006, it riled sections of British Asians in his native town of Bedford. Mahmood, for them, was Pakistani and should have aspired to play for Pakistan. His right to make his own choice was denied him and he was booed and heckled every time he stepped up to bowl, prompting strong reactions from former English cricketers like Geoff Boycott. Boycott, true to his outspoken nature, said this was “uncivilised behaviour”. But Boycott’s own position, as the following passage published in The Guardian  on 24 July 2002 demonstrates, is mired in prejudice.

‘Geoffrey Boycott was impressed. Just over 22 yards from where he was standing, behind the nets at Yorkshire County Cricket Club, a lean and whippy fast bowler was sending the ball through with genuine pace and hostility. The legendary former England opening batsman took young Zaf Shah aside and told him: “If you stick at what you’re doing, you’ll go a long way, lad. You could be the first Pakistani to play for England.”’

You didn’t miss that Boycott referred to Shah as the “first Pakistani”. It is this practice of non-assimilation that is at the root of the aggressive British Asian behaviour when it comes to who they back as sports fans. Pushed to the margins, though inadvertently on occasion, they have been forced to behave in a manner ‘unacceptable’ to many.

Will this change in the future if England were to become truly multicultural? Will it ever happen that a father continues to support India while the son, born and raised in an England that is open and truly multicultural, backs his home nation? The immediate answer is: ‘we don’t know’; a more nuanced answer, if current trends are anything to go by: ‘there’s hope still’— assimilation is not a lost cause. With the new government seeking to encourage integration and taking a strong stance against racism of any kind, it’s conceivable that some years down the line, the South Asian community will feel truly empowered. Maybe when India tour next in 2014, the English will not be deprived of home support and India will not be decreed the home team at the mecca of English cricket.

For the moment, though, such a scenario looks a distant dream. In this series at least, the Indians are assured of huge support wherever they play. So much so that England will have considerably less support at all match venues.

Does this support really matter to the players? When I asked the Indian captain the question at Taunton, his answer was ‘yes’ and ‘no’. “It is always good to have crowd support. When the going gets tough, crowd support inspires the players. At the same time, I believe it is the 15 [in the touring squad] and more the playing 11 who will have to perform at their best to win matches,” said Dhoni. While the Indian captain preferred to play down the significance of crowd support, Paul Collingwood, England’s former T20 captain, had underlined its significance in June 2009. This was the India-England match in the ICC World T20 championship. In the post-match presentation, Collingwood said the booing of his side by Indian fans did serve as extra motivation for England going into the game. England used the motivation well and dumped India out of the competition.

As we await the start of what promises to be a cracker of a series, the contentious issue of crowd support is at the centre of intense media scrutiny. This is because patterns of crowd behaviour over the next month-and-a-half will answer a lot of crucial questions on issues of identity, multiculturalism and pluralism in Britain. While these issues appear far removed from the sport itself, jingoistic British Asian support for India has ensured that they are at the core of public discourse, and, in the coming weeks, there will be as much interest in on-field action as the goings-on off the pitch.