The could-have-beens are as big a part of cricket lore as its many records. The century Sachin did not get at Lord’s will perhaps make it more memorable. Like Bradman’s last innings duck 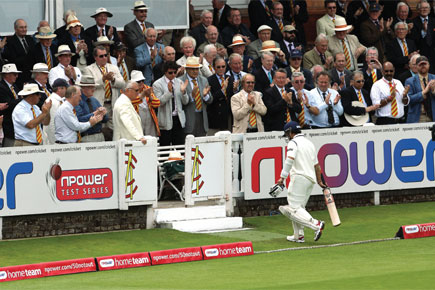 The could-have-beens are as big a part of cricket lore as its many records. The century Sachin did not get at Lord’s will perhaps make it more memorable. Like Bradman’s last innings duck


Just days ago the clamour was: “Can he?” Now it is a lament: “Why couldn’t he?” If Sachin Tendulkar decides to hang up his boots before India tour England next in 2014 (you can never be sure he’s done till he really is, but he will be nearing 42 then), his name will be missing from the Lord’s Honours Board forever. That won’t diminish his legend any, but it will perhaps mock the Honours Board its self-importance. There are other notable absentees in this roll of honour—names like Lara, Ponting, Kallis and Laxman—but somehow their absence has not been deemed worthy of this kind of fuss.

Everton Weekes, the legendary West Indian, once told me, “Had I not got out for 90 in the sixth innings against India in 1948-49 after getting five consecutive hundreds, people would not have romanticised the feat. A sixth hundred would have meant I had six centuries on the trot. A 90 meant people would always say: ‘Weekes couldn’t get 10 more runs!’” The ‘could have been’ stories are as much part of cricket lore as its records, statistics and standout performances.

Soon after Abhinav Mukund had dragged Stuart Broad on to his stumps after a well-compiled 49 in India’s first knock, Lord’s erupted. Mukund may have thought for a moment that the deafening applause was for him. He had, after all, made 49 in his first Test at Lord’s, 12 more than Sachin has ever managed to get, and Lord’s has a tradition of applauding every good performance. However, it was intended for the man coming in. All present in the Long Room stood up as Sachin walked past them on his way to the crease. Every spectator, English or Indian, was tense. The “Can He?” murmur had returned. I was with Adam Chad- wick, the head of the Lord’s museum, at the time. “I did not want Sachin to wait in the dressing room for too long. This is ideal for him,” said Adam, who had already planned on asking Sachin for his shirt for the museum if he did make it to the coveted three-figure mark. Some had paid nearly £700 in the black market for a ticket to see Sachin bat—call it the price of privilege. On the final day too, a working Monday in London, Lord’s witnessed a full house with people lining up for tickets from 6 in the morning.

Despite all the drama around him—and others can only guess at how he bears the weight of that expectation—Sachin appeared calm. Despite running high fever on Day 3, he did his best either side of lunch on Day 5, when India were fighting to save the game, to not let the bowlers dictate terms in conditions that helped swing. A back foot cover drive foretold a different script. But somewhere in that knock that Sachin won’t care to remember he seemed to have thrown an invisible switch—the dominator had retired; the survivor had taken over. By his own admission, a 100 at Lord’s was an unfulfilled wish and it is now apparent that he will have to live with it. Given the adulation for Sachin at ‘the home of cricket’, the loss is perhaps bigger for the MCC than the man who missed it. Sachin, many of them say, can live without it for he has a few more records to fall back on. But for Lord’s to not have the name of the greatest who has ever played the game on its Honours Board will surely diminish its history some.

Even more so because Sachin’s love affair with Lord’s has intensified in recent times. He has made the ground home every summer for the past five years. He loves to visit the MCC indoor academy, loves to train his son at the academy at every available opportunity. He has a property in the vicinity and is a common face at the ground in June-July every year. He is, as one MCC member put it, “gradually becoming one of our very own”. So it hurts worse. The pain was palpable when Sachin nicked a full Stuart Broad delivery in the first innings after having made a fluent 34. Just as Graeme Swann picked up the ball low in the slips, there was a hushed silence in the stands. You could almost hear Stuart Broad celebrate with his mates in the middle; they seemed to be the only ones celebrating. The second innings was no different. When Andrew Strauss dropped him of James Anderson, the entire JP Morgan media centre heaved a sigh of relief. The dream was still alive. If shortlived. Just two balls later, Sachin, who seemed to have withdrawn into a dogged-survivor mode, was trapped plumb in front by Anderson.

As he began the long walk back to the pavilion, so did the applause. The 28,000-plus present on the final day, having taken a few seconds to come to terms with the shock, were on their feet again. It was hard to believe that this was his last trudge back to the Lord’s pavilion. Forgotten was the fact that he had failed to save the match for India. And that he had been dismissed after a scratchy innings of 12 that no one will want to remember. That heartfelt, yet forlorn, ovation from a capacity crowd was in fact homage to an extraordinary career, not for an innings that hadn’t granted them a last wish.

Visiting Lord’s after a hiatus of a year, I spotted a notable addition to the hoardings at the ground. Right next to the indoor training academy at the back end of the Nursery Ground is a huge new hoarding with Sachin on it. He is seen guiding a ball behind point, another trademark Sachin shot. The accompanying inscription reads: ‘It’s an extremely special ground for me. This is a ground where all batters dream of getting a hundred and I’m no different… It’s extremely special to be out in the middle at Lord’s.’

Of all the English grounds he has played at, Lord’s is where he has performed the worst. While he averages over 70 at Trentbridge and Edgbaston, over 100 at Headingley and 40 at the Oval, his average at Lord’s is a dismal 21.

What does Sachin’s failure to get a 100 at Lord’s mean for cricket? Mark Nicholas puts it in context: “It perhaps means that even the greatest are fallible and that the best of the very best is not enough on occasion.” While Ajit Agarkar, Matt Horne, Mark Richardson and Marcus North have their names on the Honours Board, Sachin does not. This is the kind of irony that brings to mind that overworn CLR James catchline: “What do they know of cricket who only cricket know.”

While the first Test was all about Sachin in many ways, it was natural justice that Rahul Dravid should have got one of his best hundreds in recent years in this Test match and managed to get his name up on the Honours Board. Dravid, for the record, is the second highest run scorer ever in Test cricket, has 33 international centuries, has taken 200-plus catches and has an overseas average of close to 55. And yet, Dravid never became a crossover star like Sachin. Had Sachin not played the game, Dravid could have been India’s most valued Test match player ever.

A true great of the game, he has always played second fiddle to his illustrious colleagues, Sachin, Laxman and Ganguly. For example, in the famous Kolkata Test of 2001, it was Dravid’s 180 to go with Laxman’s 281 that won India the match against Steve Waugh’s Australians. While Laxman’s knock has become part of cricket legend, few talk about Dravid’s knock in the same partnership. At Taunton in the 1999 World Cup, it was Dravid’s 145 to go with Sourav’s 183 that propelled India to a mammoth 373 against Sri Lanka. Again, people remember the match for Sourav’s exploits. And now, after the T20 revolution, many younger stars like Virat Kohli, Suresh Raina and Yusuf Pathan have overtaken Dravid as bigger and more marketable brands. Against this backdrop, it was fantastic to see Dravid get the hundred. It’s only the second time that India have lost a match in which Dravid has scored a century—most of them have come as part of a winning cause.

There is a kind of justice in Dravid getting a century here when Sachin could not. It felt right that India’s most consistent, if not the most celebrated, Test match player should do it at the most fabled Test match venue in the world in front of arguably the most knowledgeable crowd in the world. For once in his career, Dravid was not playing second fiddle. As an ardent Dravid fan, I am not complaining. I was glad that Dravid took centrestage at Lord’s. If only he’d managed to save the match for India.