Individually brilliant, together simply unmatched. In a double-barrel interview with Open, Virender Sehwag and Gautam Gambhir show glimpses of what makes them the best opening pair in the modern game. 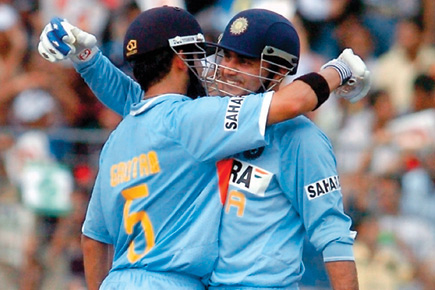 They are surely the best opening pair in the world and the most destructive as well. While one was labelled the player of the decade by The Daily Telegraph, the other came temptingly close to breaking Sir Donald Bradman’s record of six hundreds in consecutive Tests, falling only 32 runs short in Bangladesh.Virender Sehwag and Gautam Gambhir spent time with Open in several exclusive dual interviews before, during and after the South Africa Test series, which saw India retain its No. 1 Test team position for the 2009-2010 cricket season. Excerpts:

Is the Kolkata victory your best Test match win ever?

Gambhir For sure. More because we lost very badly at Nagpur. After Nagpur, we were all determined to make a comeback and prove our worth and emphasise that we are deservedly the best in the world. It was a great match for us and we all tried to give our very best after Nagpur. Certainly it is the best Test match win of my career.

It was a pity that you got injured, but I saw you rushing to the sidelines every 10 minutes, throwing bottles of water to the players on the field, inspiring them and playing your part. What did you feel when Steve Davis’ finger went up after Harbhajan trapped Morkel LBW?

GG It was a fantastic moment. We were all under pressure after Nagpur and wanted this win very badly. With the fourth day almost washed out, we were under pressure on day five to pick up the remaining seven wickets. Credit must be given to Ishant for the way he bowled after tea. With Zaheer injured, he was our only fast bowler and he bowled his heart out. And Harbhajan. What a match he had! He has always performed at Eden Gardens and this was once again a special outing for him. Overall, it was fantastic.

So, India have retained the No. 1 spot. How much does that matter to you?

GG It matters for sure. We have put in a lot of hard work to get up there, and I am confident we have the team to be up there for long. We have started 2010 very well. We’re all looking forward to winning many more matches to cement our position at the top.

Did you feel any additional pressure with no Rahul Dravid and Yuvraj Singh?

Sehwag No. We know we can beat any team in the world if we play to potential.

Before the series, many felt it would be a contest between Sehwag and Gambhir and Steyn and Morkel…

VS No, it’s about the Indian team against the South African team. For us both, we have done well as openers against every opposition in the world.

Gautam, what is it like batting with Viru in the middle?

GG There can be only one Virender Sehwag. You can replace a lot of players, but you can’t replace a Virender Sehwag. And I mean every bit of what I am saying. Getting a triple hundred is almost impossible and he has two to his name already and almost got a third when he fell short by seven runs against Sri Lanka in Mumbai. The kind of impact he’s had on all three forms of the game is just unbelievable, and batting with him is a fascinating experience. His biggest virtue is that he wins you matches by setting them up for the team, something not many batsmen have been able to do.

Viru, the person saying it isn’t doing too badly either. He has truly come of age as a Test batsman, hasn’t he?

VS Gautam has been batting brilliantly for more than a year now. He has worked extremely hard on his batting and his technique since he was dropped from the team. When he was dropped, not many would have thought he could come back this strongly. I am delighted for him. In fact, I have always said that Gautam is India’s best opener after Gavaskar. He is a regular opener; I am not. And he is surely the best we have got after Gavaskar. I can also predict with certainty that he will break all of Gavaskar’s records.

Q When you two bat in the middle, it looks to us like you are enjoying every moment of the partnership. You seem to be always laughing, cracking jokes, egging each other on…

GG We try to help each other relax all the time. However much it might appear that we are laughing or joking, there’s no denying that international cricket is not an easy arena. There is pressure all the time, and even if we can relax each other for just the next ball, it is of great importance. We have been batting together for a long time, first for Delhi and then for India, and that helps a great deal. We understand each other very well. And all of this adds to the strength of our combination.

Viru, Gary Kirsten has played with Sachin, Laxman and Rahul. They are all mega icons and legends in their own right… So what does Kirsten offer you all? Why should a Tendulkar listen to a Kirsten?

VS Gary Kirsten is not here to teach you cricket. He doesn’t tell you how to bat or bowl. What he does is point out where you are going wrong technically with your batting or bowling. He has played more than 100 Tests himself and has all the capabilities expected of a great coach. He can tell you where you are right and where you are going wrong and help you rectify the flaw at the nets. Also, he has tremendous man-management skills. He helps us all, be it a Tendulkar or an M Vijay, and is the best cricket coach in the world.

Viru, very recently there was speculation in the media about Team India being a divided house. I know you have very strong views on this…

VS There’s no basis to such rumours. We are a fantastic unit and play as a family and live like a family. We are delighted at each other’s achievements and clap at each other’s success. We are always encouraging each other and this is yet another area where Gary has played a pivotal role. There’s no doubt in my mind that we are on the right track and if we can continue like this we can do very well in the ongoing series.

In a few days, Gautam will be Skipper Gautam Gambhir during the IPL. Your take?

VS I have always said that Gautam will make a very good leader. That is why I had given up captaincy in the first place. He did extremely well when captaining Delhi in the Ranji Trophy, and I am confident that under him the Delhi Daredevils will do very well in the IPL.

GG Gautam, any thoughts on captaincy?

To be honest, I am only focused on the job at hand. I have not even thought about the IPL at this point in time.

VS (laughs) But he was all smiles when shooting commercials for the Delhi Daredevils!!

But that was a commercial, it was a shoot he had to do, isn’t it? Gautam, would you say that this team, more because of the responsibility that comes with the No. 1 ranking, is more focused than many Indian teams of the past that you have played in?

Okay, would you say that you all are mentally tougher than some of your former teammates?

GG Yes, you can say that. When Indian teams of the past visited Australia or England, for example, our body language wasn’t always up to the mark, and we did not always believe that we could win. Now things are different. Whether we are playing overseas or at home, we always play to win, and believe that we can beat any team. Some people say India does not have a good bowling line-up. As far as I am concerned, bowlers win you Test matches and you don’t become the No. 1 team unless your bowlers have picked up 20 wickets consistently. We have beaten New Zealand in New Zealand, Sri Lanka on flat tracks, Bangladesh on flat tracks, and have been winning matches in all cricketing countries of the world and in all conditions. Zaheer is bowling brilliantly. I simply don’t understand what people want from our bowlers. For me, it is a fantastic combination between bat and ball that has got us this far.

Gautam, I must ask you about a comment that Viru continues to emphasise. He says he has always said to you that getting hundreds is not enough. Rather, you have to get double hundreds, if possible triple hundreds. Only then will bowlers be in awe of you.

GG (laughs) Look, getting to a hundred is difficult enough. Every player who plays the game wants to get a double hundred and a triple hundred, but they don’t come easy and you have to be a special player like Viru to get there consistently. Yes, he keeps telling me to score big hundreds and I keep telling him that not everyone is a Virender Sehwag.

VS (interrupts) You see, it is important to get big hundreds, for only then will bowlers show you that extra respect. They will be scared of you and you will have a mental edge over them when you go in to bat.

GG  All of what he says is right, but as I said you need to be a Virender Sehwag to get there consistently. Of course, I’d love to score big hundreds each time I go in to bat.

Thanks to both of you, and all the best to your partnership in the coming months.

GG Before we go, I wanted to ask you if you have seen footage of Len Hutton play? I have been told that Hutton used to play like Bradman. Is that true? Also, how good was Sir Jack Hobbs and his opening partner Herbert Sutcliffe?

Wow, you have an interest in cricket history. Hutton was fantastic, no question, but there were others like George Headley in the West Indies as well. And Hobbs and Sutcliffe continue to have the best average as an opening pair till date. The 1920s was their decade and Hobbs scored more than 100 first class hundreds, a statistic enough to tell you how good he was.

GG Can you get me some DVDs of Bradman and these legends the next time we meet?