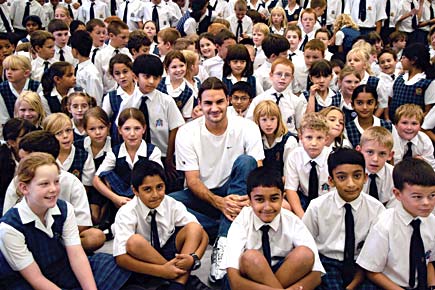 
AT ONE POINT it was believed that the only thing that could stop five-time Wimbledon champion Roger Federer was a speeding train. Then along came Rafael Nadal, a Spaniard whose ground strokes are among the most destructive forces in modern tennis and a train seemed a gentler option.

In their last six meetings, Nadal has beaten Federer five times. The Spaniard leads overall 13-7. When Federer got his 14th Grand Slam at this year’s French Open equalling Pete Sampras’ record, his first ever title at Roland Garros, the victory was still stained by Nadal’s loss in an earlier round. So, the hugely entertaining analysis of the psychological hold Nadal has over Federer (though Federer did beat Nadal on clay in Madrid before the French Open) is far from over. Apart from Nadal, there is another force of life that theorists believe will affect Federer’s game. Impending fatherhood. Federer’s new wife is expecting their first child this summer.

Sports writers and educated fans have found confluence in the question: how will fatherhood affect Federer as a tennis player? Will his single-minded devotion to tennis blur when faced with the midnight bawl of an infant? Will he be caught napping on the Wimbledon grass courts after a night of changing nappies? Will Nadal complete his conquest of the man considered the best ever, with unexpected help from a toothless toddler?

Tennis experts throw figures at us that prove that fatherhood does not gel with Grand Slam trophies. A flashback to over 30 years should already give Federer sleepless nights, even before the baby comes.

Ivan Lendl, who fathered five daughters and gathered no Wimbledon titles, could not score a single Grand Slam after his first-born. When he won the 1990 Australian Open, his wife was pregnant with their first child.

Pete Sampras never won a Grand Slam as a father despite a count of 14 titles. His actress wife Bridgette was carrying their son when Sampras won his last tournament—the 2002 US Open. Since 1980, only eight men have hugged a trophy after holding their baby. Tennis fathers have won only ten of the last 115 Grand Slam titles.

That’s one side of the story.

The person whose poster should go up in the Federer bedroom for inspiration is the original grunting slugger Jimmy Connors. His son Brett was born in 1979 when Connors was 27, as old as Federer is now. Connors had won five Grand Slams till then and went on to get three more. But then Connors is the only exception.

Leander Paes won the US Open doubles with Martin Damm in 2006, just five months after the birth of his daughter Aiyana. Two of his nine Grand Slam titles have come after fatherhood; the French Open Men’s doubles this June being the latest. But then, by the time his daughter was born, Paes was already 32 years old.

The other side of the story, as you see, is brief.

Having established, through these rather bleak statistics, that Federer’s chances of extending success on his 14 Grand Slam titles are almost non-existent, this might as well be the Swiss champ’s sporting obituary. Or is it?

With career earnings of over $40 million, it can be safely assumed that Federer would be able to afford a nanny or five, sparing him the worries of waking up in the middle of the night to burp the baby. His family can travel with him. If his wife Mirka Vavrinec is not a distraction, maybe the baby will not be one either.

While a battery of nannies might be the western way of dealing with children, India has its set of nanas and nanis to help raise the child. An analysis closer home of fatherhood and sportsmen throws up a different set of equations, of distractions, recommitments, personal psychological make up that can make or mar a career.

As someone who handled his tennis career and parenthood with equal grace, Ramesh Krishnan agrees that at “different stages different things hit you. Even when you are travelling, it’s possible for your mind to get caught in this and that”.

Krishnan had his first daughter, Gayatri, in 1989. While the Krishnans managed to travel a bit together after their first child, once Nandita came along, it became difficult. “Gayatri started travelling when she was just three months old—she came to New Zealand and Australia in January 1990. My wife (Priya Krishnan) and I would take turns baby-sitting. But once the second child came along, travelling together became difficult,” says Krishnan.

At the other end of the spectrum, there are cases where a top-level sportsman has performed better after a baby is born. “It allows you to relax after a hard day’s training,” says Prakash Padukone, whose daughter Deepika was born in 1986 in Copenhagen where Padukone lived during the peak of his badminton career.

Priya Krishnan too supports Padukone’s theory, saying that having the girls at home, in fact, helped Ramesh unwind. Paes told a newspaper after his win at Roland Garros how his tennis has improved since he is much more relaxed now.

Padukone, Krishnan and former Indian cricket captain Dilip Vengsarkar are all praise for their spouses during the challenging phase of new parenthood. Padukone says, “I would give a lot of credit to my wife Ujjala who almost single-handedly brought up Deepika especially in the first year when we were based in Copenhagen.” By the time Deepika turned three, Padukone retired.

Vengsarkar might have loved to travel with his family, but it was not easy. “Players did not make enough in those days to travel abroad with the family,” he says. Being a travelling sportsman, he missed out on many occasions with his children, son Nakul and daughter Pallavi. “You miss out on admissions, taking them to school and weekend outings, which every parent would do.”

Fast-bowler Glenn McGrath, who was recently in South Africa as part of the Delhi Daredevils team, says, “It’s been a tough eight weeks (for the IPL) to be away from my kids. It’s been tough to stay away from them since my wife Jane passed away last year. I miss them a lot and am really looking forward to being with them. I speak to them every few days. I was happy whenever I had them on the tour and I missed them on long tours when they were not with me,” he says.

While the joy of impending fatherhood might overcome all other ambitions for Roger Federer at the moment, his undeniable talent and mental strength will come to his aid. At 27, he is still short of sporting middle age. The confidence-boosting French Open win breaks one barrier, but not all. A baby might influence a change in perception; allow him to appreciate his challenges differently.

Virender Sehwag, for instance, makes this rather quirky analysis of how a child can alter a sportsman’s thought: “It’s easy to play Brett Lee; it’s difficult to handle Aryaveer [his son]. If Lee is unhappy, I can ignore him, but I can’t ignore Aryaveer.”