“My idea was to make a bat…like a golf club”

The man behind the Mongoose bat explains his confidence in this ferocious little whacker. 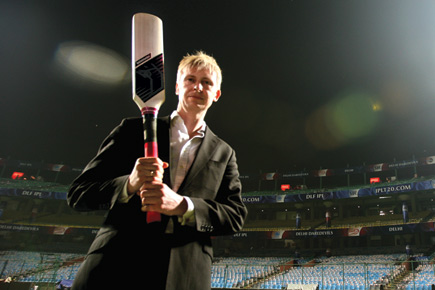 The man behind the Mongoose bat explains his confidence in this ferocious little whacker.


Matthew Hayden has played many a destiny-defining knock for Australia, and sat in judgment on many a new ball bowler’s career, often pronouncing them unworthy of the international cap. Last week at Delhi’s Ferozshah Kotla stadium, the future of another man rested firmly in Hayden’s mighty hands. Marcus Codrington Fernandez. Fernandez watched from the stands, shaking like a leaf, wondering how his £300,000 investment would negotiate its moment of truth, as Hayden unsheathed the stout Mongoose. It could have been a scene out of Conan the Barbarian. As it turned out, Hayden pummeled the Delhi bowler with the kind of brutality that surpassed even his own brand of BDSM batting. Fernandez couldn’t have ordered a better ad for the Mongoose. In an exclusive chat with Open, Fernandez, former global creative director at ad agency Ogilvy, and creator of the Mongoose, talks about how his bat could change cricket forever and his fears in surviving against the collective financial muscle of the game’s establishment.

Q What made you think of redesigning what’s perhaps the most important cricket equipment—the bat?

A Over the years, cricket has transformed itself. First came one-day cricket, coloured clothing, floodlights, television technology, and now the T20. Cricket has seen cataclysmic changes, but strangely, cricket equipment has largely remained the same. When I started working on Mongoose, the people over at the Lord’s museum were kind enough to take out from the glass case and show me the bat used by Albert Trott in the late 19th century. Now Trott was as spectacular a hitter in his days as Yusuf Pathan is today, and till today he remains the only batsman in the world to have to hit a ball over the Lord’s pavilion. When I looked at his bat, it struck me that although the game has changed quite dramatically, bats really haven’t. The principle of a cricket bat is no more different today than it was when Trott hit that six in 1898. After the golden age of cricket, when we had the likes of Victor Trumper, WG Grace and Jack Hobbs, cricket really fell into bad times—with a scoring rate of three an over in Tests becoming highly respectable. This is perhaps the first time batsmen all over the world are playing with a certain Victorian free-spiritedness. Why is it that the Sehwags and Dhonis who entertain us with their carefree stroke-making use the same piece of equipment that Geoff Boycott and Mike Brearley, who bored us to death, did? That’s what got me started off.

Q But several retired cricketing greats such as Sunil Gavaskar and Ian Chappell, now sitting in the commentary box, bleat on about modern players using bigger and better bats.

A Look, a lot of it is just smoke and mirrors. While it’s true that the blades have become bigger, thicker and more concave, it’s fundamentally the same product. What’s happened is, we’re getting physically bigger and bigger players. Look at the likes of Hayden, Symonds and Dhoni. Even a finger spinner like Paul Harris is built like an ox. There seems to be no place in international cricket for a player with a physique of, say, a Gower or Azharuddin. I don’t have the weight of Test runs behind me when I say this, but the old-timers probably never trained hitting the ball out of the park. The commentators that you mention are a product of their times. Now, there are these new shots invented every season like the Dilscoop, the Dhoni Whip, switch hit, the reverse whack, and there’s Sehwag’s whole new manual of stand-and-deliver strokes. Shouldn’t bats change with the changing nature of their usage?

Q So, how is the Mongoose different? Your website suggests there’s plenty of rocket science behind it.

A My idea was to make a bat that would, like a golf club, let you hit the ball longer and harder. With the initial idea, I went to Tony Cook, a close friend and head bat-maker with the English firm Hunt’s County. There was help from Anthony Bull, one of the leading bio-mechanical engineers at the Imperial College, London, who did an exhaustive study of our bats vis-à-vis others. We worked with several models with the bats’ weight redistributed. There’s indeed a lot of scientific research that’s gone behind it. The Mongoose MMI—that incidentally stands for ‘mass and moment of inertia’—that Hayden used is 33 per cent shorter than a conventional bat’s, and its handle over 40 per cent longer. Most importantly, the splice [the thin V that you see on top of any regular bat where the handle fuses into the blade], is incorporated in the handle, which ensures there is no dead spot in the hitting area of the bat. So on a downward stroke, when you are attempting a lofted drive, the whip is the greatest at the last millisecond, just like in a golf club. The redistribution of weight and longer lever offered by the long handle means 15 per cent more bat speed and 20 per cent more power. Scientific tests by Bull prove that. And because the ‘sweet spot’ runs through the entire length of the bat, including the top and the toe, it helps batsmen in the modern game to forcefully hit even yorkers.

Q Mongoose hardly looks like a cricket bat and its squat design makes it seem unwieldy. Would that discourage serious professionals?

A When we were trying to sign up Hayden, he decided to try it out at the Lord’s indoor nets. At first sight, he was unimpressed. But with a guy like him, it works in a counter-intuitive way. He wanted to test himself against the bowling machine with a bat that didn’t look like a bat. He missed the first two balls, but he absolutely nailed the third dead straight, nearly knocking my head off from where I was feeding the bowling machine. The benefits of Mongoose are there to see. I think it ideally suits T20 cricket.

Q The last time there was such a buzz about a cricket bat was during the 2005 Ashes when Flintoff and Pietersen used a brand called Woodworm, whose edges on both sides were scooped off to supposedly aid stroke making. Now not too many remember the company. Is the same fate awaiting Mongoose?

A No, it certainly won’t, because Mongoose is not built on some cleverly woven marketing myth. I can’t think of a cricket-related brand that’s got as much publicity and attention as the Mongoose. But it’s well deserved because it is a genuine technological innovation that addresses a real-time need. The benefits are tangible.

Q What about ICC and MCC regulations? Is this bat legal?

A Most definitely. We worked closely with the MCC, the custodians of the game’s rules, and the MCC Laws sub-committee. We got approval from them and the ICC only after they were convinced that Mongoose was within the spirit and letter of the law. There’s no material other than wood, no external agents like the graphite reinforcement in Ponting’s bat a few years ago, and we adhere to the law on the width of the blade.

Q Manufacturing and selling cricket bats is not a sexy business, especially when sports giants like Adidas and Nike sign up star players and slap their logos on the bats. Many leading bat-makers, like SS and SG in India, eventually end up as contract manufacturers for the biggies. Will you survive and, even if Mongoose is a success, what’s to stop copycats?

A You are absolutely right. That’s the question I ask myself every morning. We are a small, six-people company and I’ve put in £300,000 of my personal money in it. Although we are well-funded right now, with a clutch of private investors ready to move in, our ability to sign up superstars will be limited. Eventually, one of the big brands will see value in buying us. As for copy cats, Mongoose has hired the best intellectual property rights lawyers in London and they’ve devised a comprehensive suite of technology and product patents that protects us adequately.

Q Why is it called Mongoose?

A Because, just like the animal, Mongoose the bat is a small but ferocious creature!