Match Made in Heaven 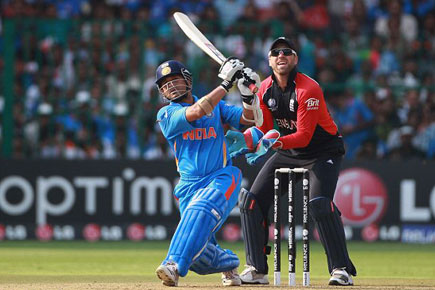 
Manicurists in Bangalore will see a spike in business the next couple of days. The India-England encounter has given fans bad nails, bitten down to their cuticles.

India were the first to look the likely winners. Sachin Tendulkar’s 47th one-day ton helped them post 338, their second running 300-plus score in the World Cup. Had Munaf Patel not been guilty of a short run on the last ball of the Indian innings, the score would have been 339. India might have won.

England, led by captain Andrew Strauss’s 158, responded in brave fashion. When they stroked their way to 280 for two in 42 overs, it was their turn to look the likely winners.

Then England’s batting powerplay coincided with India’s bowling resurgence. Over numbers 43 to 47 were India all the way. Zaheer Khan bowled a dream 43rd, getting rid of both the men responsible for England’s sound health — Ian Bell and Strauss. England were supposed to nail it in the batting powerplay. Instead they lost four wickets and scored just 25 runs.

Back to India on top. England need 34 from three overs, with only one of their remaining batsmen — Michael Yardy — known for big hitting.

But Yardy departs in the next over. Now it seems beyond doubt. Earlier, there seemed a fair number of St George crosses hanging off the balconies. Now they seem to have been folded away.

But there is one more twist in this long pigtail of a match. England smash 15 from the 49th , sent down by Piyush Chawla. Graeme Swann and Tim Bresnan, bowlers both, hit a six each. England’s target now looks reachable — from the last over. But do they have the batsmen?

They have Ajmal Shahzad, in whose story you see the role of destiny. Had Stuart Broad not suffered a stomach upset, Shahzad would not have played. He shares the new ball with James Anderson and now, in the last over of the match, hits Munaf Patel for a six. The more experienced Swann keeps his head for the rest and we get a tie. In the next two minutes, the word “tie” probably gets uttered more times than any other word over the previous seven hours. “Tie!” “Tie?” “It’s a tie!” “Is it a tie?” “God, it’s a tie.”

The captains say it is a bittersweet experience. Truth be told, it is more a victory for England. They came back twice in the match. Besides, to chase 338 and all but defeat India at their own game, batting, on a surface custom made for India, was an achievement.

“We will take a lot of confidence from chasing such a big score,” Strauss says. He does not look exhilarated. Just content. Not only has his team managed to win a point, he has scored “his best one-day innings ever” and been named Man of the Match in a historic contest.

Dhoni appears unhappy over the umpire referral system, overruling the field umpire’s leg before verdict of Bell off the bowling of Yuvraj Singh. Bell, who made 69, was on 17 then. The ball looked headed for the stumps, but Bell had gone for a sweep and his foot was out in front.

While Strauss and Tendulkar are centurions, there are others who have made valuable contributions. Gautam Gambhir and Yuvraj Singh have scored fifties. Tim Bresnan has taken five for 48. As someone says, no one deserved to be on the losing side.

In hindsight, India’s latter batsmen lived as extravagantly as Wall Street bosses. The last seven wickets went for a mere 33 runs. The England bowlers, on the contrary, were like dogged chartered accountants, cutting costs though their company had suffered severe losses in the first three quarters. When India did not get to 350, something they looked on course for, there was a sneaking suspicion that it might prove costly. There was only an undercurrent of fear, though. For the most part, 338 seemed enough. “England need 339 to win, otherwise known as a miracle,” the venerable Cricinfo said. Of course, some of the euphoria was a result of Tendulkar’s century.

England, however, demonstrated their professionalism by not letting the mood of the setting affect them. Strauss and Kevin Pietersen gave the team an assertive start. From the time Strauss flicked the first ball for four, the batsmen never looked in trouble.

Tendulkar’s century, the 98th of his career, was a controlled yet strokeful 120, almost exactly a year after his 200 not out against South Africa in Gwalior. That knock was played on 24 February 2010.

Sachin has been on the throne of Indian sport only eight years less than Hosni Mubarak in Egypt. The difference is people want Sachin to stay. The cliché, ageing like fine wine, is relevant in Sachin’s case. Maybe it is a rumour that he lives in an apartment; maybe he actually lives in an oak barrel.

Except for being tested by Anderson a couple of times, Sachin played a chanceless innings on a track that Dhoni said was slow when India batted. Sachin showed patience and smartness, playing himself in before attempting bold strokes. It was tactical seduction. Nothing heavy duty till the third date. Soon, you are in full control. Unless you do something foolish, she’s yours. Sachin did do something foolish. On his last ball, he stood exposing his stumps, then moved across, attempting to step inside the line of the ball and flick. He ended up top-edging a catch. But by this time his conquest was complete and foolishness looked charming. Anderson got the wicket and a modicum of satisfaction on an otherwise frustrating day, which saw him become the most expensive bowler ever in a one-day international in Bangalore (9.5 overs, 91 runs, one wicket).

It was a satisfying knock for Sachin’s fans because it had everything they crave to see when he bats. There was subtlety and power. Just as there were 400cc sixes, there were boundaries with just enough force for the ball to roll to the ropes. There was also an upper cut four similar to the six he hit against Shoaib Akhtar in the 2003 World Cup. He was most severe on Swann, expected to make an impact with his highly regarded offspin. Tendulkar hit him for three sixes. He faced 23 balls from Swann and took 31 runs from them.

The high profile nature of both teams, the stature of the tournament and the significant capacity of the stadium meant the atmosphere was always going to be charged. Moreover, the ICC has appropriated football’s popular routines that add to the ambience. Boys carry out giant team flags, after which players troop out of the tunnel holding the hands of children. (Munaf went a step further and carried a boy in his arms). The teams line up and the national anthems begin.
The Indian and English anthems took two minutes and 3.33 seconds. That was enough to hose out whatever negativity one had for contemporary cricket. The overdose of the game, its commercialisation, its predictability, the flat batting tracks ceased to matter. Those two-and-a-half minutes were about succumbing to the waves of emotion crawling up your body and remembering everything that was good about sport.

And this was that rare game in which you felt the sensations at the end too.