It Was a Classic

Germany’s 4-1 defeat of England at the World Cup, despite the refereeing controversy, will be a match long remembered. 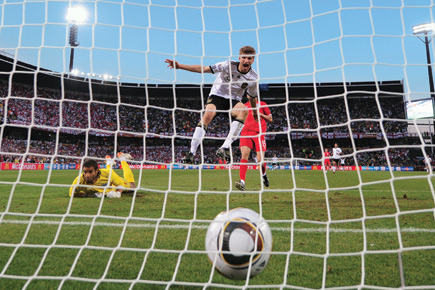 Germany’s 4-1 defeat of England at the World Cup, despite the refereeing controversy, will be a match long remembered.


As sporting rivalries go, none, not even India-Pakistan cricket matches, can live up to the heat generated by England versus Germany on the football pitch. Military metaphors are always close at hand for the England faithful. You don’t have to look hard to find some looney England supporters dressed in RAF pilot uniforms at these matches. If political history were to shape sporting destiny, England would always win. But unfortunately for the English, it hardly ever pans out that way. Despite the apparent mismatch of skills and talent, last week’s World Cup clash between the two countries at Bloemfontein, South Africa, had the UK media hyperventilating—so much so you’d think it was the Battle of Ypres.

Online football forums were full of World War II allusions. Among the most recycled was, ‘This World Cup is exactly like the second world war. The French surrender early, the US turn up late, and we’re left to deal with the bloody Germans.’ The general jingoistic pre-match optimism notwithstanding, there were some bad omens for the English. For instance, England have never beaten their Teutonic rivals in years featuring a royal visit to Canada; and Germany always gets the better of England in any year that a Robin Hood film is released.

When two competing historical narratives replace goalposts, it’s instructive to cast a glance at statistics. In 28 competitive matches, Germany has a marginal advantage, with ten wins over England’s nine. But more pertinently, England have only ever had the better of Germany in a multi-nation tournament in 2000, after famously defeating them in the 1966 World Cup final at Wembley. And in every Cup since, Germany have finished better than England. Since then, while England have won a grand sum of zero trophies, German footballers have won two World Cups, as many European crowns and countless final appearances.

Success against the old foe is so scarce that English fans buy DVDs of a 2001, 5-1 thrashing of Germany in Munich to humour their pride. Just as goalkeepers unfailingly criticise the Adidas ball before a World Cup, an England loss to Germany at the showpiece event has become one of the few nailed-on certainties of life.

German fans, on their part, claim no such emotional investment in these contests. For them, England is just another opponent, and they usually reserve their most passionate loathing for northwestern neighbours like the Netherlands.

While history wasn’t rewritten in this edition of the Cup, for once, this most lopsided of recent rivalries did turn out to be a classic. Even the most ardent of Germany supporters would concede that the eventual 4-1 scoreline is a bit flattering. If only Frank Lampard’s netless goal that clearly crossed the line wasn’t deemed phantom by the referee, the two teams would have retired to the dressing room at half-time locked 2-2. Maybe Fabio Capello could have given his troops a rousing Churchillian speech, and just maybe England could have held out long enough to nick it on penalties.

German fans would have gladly taken home an ill-gotten victory, but the fact that they drilled home two more goals after that infamous refereeing blunder sent them deservedly into raptures from Berlin to Frankfurt. The gulf between Germany’s youthful, adventurous brand of football and the English kick-panic-and-scamper approach was all too wide.

By the time you read this, Germany could well have been turfed out by Argentina administering a dose of their own medicine, but for the young, wet-behind-the-ears German team, anything more would just be a big bonus. The perverse joy of watching England lose, especially against Germany, is complete only once you read the UK press the morning after. The self-flagellation and calls to sack anyone even remotely associated with the running of the game reaches such a crescendo that Indian news TV’s ‘Match ke mujrim’ variety of cricket recriminations would appear cheerful barracking. But slowly, a grudging respect is growing in England for the German achievement. This is largely because most football followers in England want to adopt as a blueprint the German way of running the game—focusless on commerce and tabloidish star players, and more on inclusive nurturing of talent.

After yet another defeat at German hands in 1972, The Observer newspaper noted that, ‘England should stop going on to the football field as if they are going to war. They should start playing the game again. To do that they need a new spirit symbolised by new players.’ On the evidence of last week’s classic, that holds true even today.